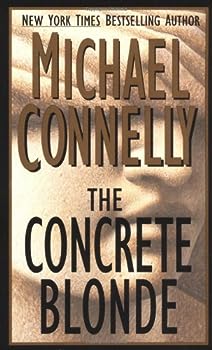 Detective Harry Bosch was sure he'd shot the serial killer responsible for a string of murders in LA . . . but now, a new crime makes him question his convictions. They call him the Dollmaker, a... This description may be from another edition of this product.

Fabulous, with a series of surprising twists

Published by Thriftbooks.com User , 22 years ago
I've read a lot of mysteries: just about the entire "Travis McGee" series by John D. MacDonald; all of the "Fletch" novels (including the two "Son of" books) by Gregory McDonald; every Raymond Chandler piece of fiction; most of Dashiell Hammett; some Ed McBain; many Carl Hiassen books; a few Agatha Christies.Michael Connelly ranks up there with all of those distinguished writers. He has a fluid, detailed writing style that conveys the scene without bogging down in such intricacies that the reader gets lost. The dialogue is snappy and hard-boiled but will probably age well (unlike, say, some of Chandler's)."The Concrete Blonde" is the third novel starring LAPD detective Harry Bosch. (The order goes "The Black Echo," "The Black Ice," "The Concrete Blonde," "The Last Coyote," "Trunk Music," and "Angel's Flight." The new novel coming out in early 2001 involves Bosch as well, but it's not clear if Bosch is the main character or a secondary character.) I've read the first three and the last ("AF"), and, while they are all good, "The Concrete Blonde" is the best thus far.Earlier in his career, an incident that is described or alluded to in virtually every novel, Bosch gained some notoriety and fame for taking down a serial killer known as "The Dollmaker." He was so called because he would use makeup and polish to paint up his victims. The killer sent bad poems to Bosch, taunting him with descriptions of the victims. Eventually, Bosch tracked down the killer and shot him to death when the man reached toward his pillow . . . for a hairpiece, as it turned out. Bosch was cleared of wrongfulness in the shooting, though he was disciplined for not calling for backup.Fast forward four years. The dead man's widow is now suing the LAPD and Bosch for violating her husband's civil rights, and the case is going to trial. All of a sudden, a letter is dropped off for Bosch at the police department: it contains a poem, just like the ones the Dollmaker sent, and it leads the LAPD to another body . . . which is painted up just like the Dollmaker's victims. Could Bosch have killed the wrong man?"The Concrete Blonde" alternates between the court scenes and the investigation of the new murder, and the transitions are deftly handled. While the court scenes are not perfectly accurate (I am, unfortunately, a lawyer by trade), they are much better than in most novels.The mystery is tight and compelling. Having read lots of mysteries, I often am able to guess at the outcome simply because the set-up reminds me of another book I've read. In fact, that happened with "The Black Ice." Not so with "The Concrete Blonde." About 180 pages into it, I thought I had it figured out. With about 50 pages to go, I thought my instinct had been confirmed. Oops. I was wrong, and about as shocked as Bosch!In addition to weaving a great mystery, Connelly paints a reasonably deep picture of his main character, Bosch, a Vietnam veteran (he cleared out enemy tunnels) who is simulta

Published by Thriftbooks.com User , 22 years ago
Concrete Blonde drew me in right from the start and I could not put it down. I guess it is true that you can judge a book by it's cover. I have read all of Michael Connelly's books and enjoyed them all - this one was wonderful. Harry Bosch is a great character and Connelly really expands him and draws us further into his world with each book. He draws the reader in and really allows you to get to know the characters (and not just Harry but the peripheral ones as well). Concrete Blonde was well written and totally addictive - once you open it you can't put it down!

***ANOTHER HOME RUN FOR CONNELLY***

Published by Thriftbooks.com User , 23 years ago
TREMENDOUS!!! Connelly did it again. Great plot and character development. Michael Connelly is as artful a sculpter of words as Michelangelo was with marble. My only regret is that I did not start at the beginning. I did not start with his first book, THE BLACK ECHO and read his Harry Bosch series in sequential order. ***Please do not make the same mistake. Start with THE BLACK ECHO then go on to the others; you will more fully enjoy Connelly's masterful creations. Also look for his latest--VOID MOON--(coming to a bookstore near you, soon.)

Follow Harry Bosch into the deep abyss- - if you dare!!!

Published by Thriftbooks.com User , 23 years ago
In this book, third in the series of Michael Connelly's Harry Bosch novels, there are no holds barred. Detective Bosch is on trial - it is a wrongful death civil suit brought by the wife and family of a man killed by Bosch, known as the Dollmaker,so named because he paints the victim's faces after brutally murdering them. The first of many surprises is that during the trial Bosch receives a letter from the Dollmaker telling him of the location of a victim killed after Bosch supposedly eliminated him, a blonde entombed in a concrete mold.I particularly enjoyed the blonde whip of a DA - she is a marvelous character who is Bosch's nemesis, but also someone whom Bosch admires. Their short dialogues in front of the second concrete blonde: the statue of Justice outside the courthouse, are skillfully handled by Connelly. A tapestry of courtroom drama intertwined with Bosch's growing doubt as to whether he killed the right man and at the same time unraveling the mystery as to the newly discovered death is spellbinding. This time Connelly somehow manages to place the reader inside Bosch's head - the more easily to feel his pain, his joys, his doubts and his lonliness. Sylvia, his current love, adds a marvelous counterpoint to the mystery - she is referred to by him as his home, his warmth and his harbor in a mad and maddening world. My suggestion to all who take on Michael Connelly's novels is to start at the beginning - with his Edgar award winning first Bosch novel - The Black Echo, and read in sequence, The Black Ice, The Concrete Blonde,The Last Coyote, Trunk Music and his newest Angels Flight. Although they can stand alone; I feel it is best to read them in order as each one is the basis for the next.If you like mystery coupled with a truly human touch,than Michael Connelly is an author not to be passed up. Enjoy!
Trustpilot
Copyright © 2022 Thriftbooks.com Terms of Use | Privacy Policy | Do Not Sell or Share My Personal Information | Accessibility Statement
ThriftBooks® and the ThriftBooks® logo are registered trademarks of Thrift Books Global, LLC