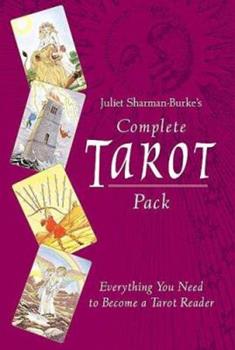 Complete Tarot Pack: Everything You Need to Become a Tarot Reader

Tarot expert and practicing psychotherapist Juliet Sharman-Burke, working with illustrator Giovanni Caselli, has compiled an essential one-box book and card set designed to appeal to a broad range of tarot fans. This oversized kit provides a full color tarot deck: the Sharman-Casselli deck inspired by both the Visconti-Sfozi and the Rider-Waite decks; an outline deck (for the practioner to fill in as the cards guide them); and a copy of Sharman-Burke's...

A more accessible tarot for everyone

Published by Thriftbooks.com User , 13 years ago
In the creation of the Sharman-Caselli Tarot, Juliet Sharman-Burke and Giovanni Caselli combined the best features of the popular Rider-Waite Tarot, and elements of classic decks such as the Visconti-Sforza Tarot and Marseilles Tarot. The result is a fully illustrated tarot deck that is accessible to everyone, and a must-have for Tarot collectors. Caselli's imagery throughout the Sharman-Caselli Tarot evokes a sense of a renaissance era. The depiction of this era is done with seemingly realistic art, filled with soft colors. Predominant are yellows, reds, light blues, light greens, and whites. Since the Visconti-Sforza Tarot and Marseilles Tarot lack illustrated numbered cards in the Minor Arcana, the Sharman-Caselli Tarot draws inspiration only from the Rider-Waite Tarot on this area. However, the Major Arcana draw inspiration from both tarots, although most of these cards imagery leans toward the Rider-Waite Tarot. There are a few exceptions. The Wheel of Fortune shows a wheel with four people at the top, bottom and sides and a blind-folded women in its center, definitely drawing inspiration from the Visconti-Sforza Tarot, while The Lovers shows a finely dressed man deciding between two women with cupid floating over his head, an imagery more akin to the Marseilles Tarot. Another interesting fact about the Major Arcana is that they are deprived of numbers. This is another nod toward older tarot decks such as the Visconti-Sforza Tarot. In this way, Sharman-Burke was able to reorder the Major Arcana to make the Fool's story of psychological development easier to follow. Pay careful attention to the order of the Major Arcana when you open the Sharman-Caselli Tarot and you will find the following ordering: The Fool, The Magician, The Empress, The Emperor, The High Priestess, The Hierophant, The Lovers, The Chariot, Justice, Temperance, Strength, The Hermit, The Wheel of Fortune, The Hanged Man, Death, The Devil, The Tower, The Star, The Moon, The Sun, Judgement, and The World. Check out the companion book: The New Complete Book of Tarot. It's very interesting and helpful for beginners. The book starts with an introduction, a brief history of Tarot, and how it works. It is further divided into four Parts. Part 1 to 3 consists of a study and description of the tarot cards. Each part include a subset of Major and Minor Arcana. Major arcana are given 2 or three pages, including a full image of the card, while minor arcanas are given half a page each. Each symbol on the cards are explored, and the meaning of the card is explained. I found that this way of studying the cards makes it easier for me to decipher their meaning in the future on my own. Part 4 includes a brief explanation on how to read the cards and four layouts: The Five-cards Horshoe, The Celtic Cross, The Star Spread and the Three of Life. These are explained with an example spread. The example are helpful, but I would have loved a more detailed explanation of
Trustpilot
Copyright © 2022 Thriftbooks.com Terms of Use | Privacy Policy | Do Not Sell or Share My Personal Information | Accessibility Statement
ThriftBooks® and the ThriftBooks® logo are registered trademarks of Thrift Books Global, LLC