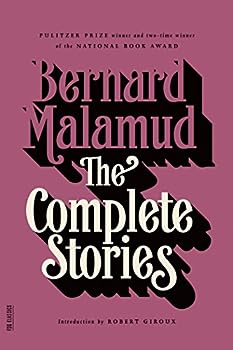 This description may be from another edition of this product. New York Times Notable Book of the Year P ublishers Weekly Best Book of 1997 With an Introduction by Robert Giroux, The Complete Stories of Bernard Malamud is "an essential American book," Richard...

Master of the Short Story

Published by Thriftbooks.com User , 15 years ago
Called the modern master of the short story, Malamud has won two National Book Awards and the Pulitzer Prize (for the Fixer). The Complete Stories is a collection of short stories -- bound by a central theme. All are about individuals faced with moral decisions or confronted by societal limitations. You'll find that the stories in this book highlight the mundane and the absurd. I was touched by the characters in the book because they are so human. I was amused, angered, and felt great pity for these fictional people. I rarely read fiction, so few authors seem to me able to "get it right". Malamud has it right. The characters react like normal people. They are alive with conflict. Like the rest of us, they sometimes make poor choices and may live unfulfilled lives. One of my favorite stories is Riding Pants. In "Riding Pants" we meet Herm, who is the sixteen year old son of a butcher. Herm lives alienated by the world around him. Riding is the only joy in his life. Like a small child's security blanket, his riding pants bring him solace. Frustrated by his son's refusal to accept his world, his father takes a drastic step. If you want fairy tale endings and beautiful people riding into the sunset, this may not be the best book for you. If you want to taste life from the eyes of another, perhaps discovery a truth about yourself. Read The Complete Stories. This is an excellent book!!!

Even better than his novels

Published by Thriftbooks.com User , 16 years ago
I picked this book up because I liked the cover and I thought, however right or wrong, that a publisher would release a collection of this length to only a quality writer. I was not wrong; this man is a master. I have read "The First Seven Years" at least fifteen times, and I have my classes read it all the time. I wish I could have met Malamud.

Published by Thriftbooks.com User , 16 years ago
Malamud has written some of the most noted stories of the second half of the American twentieth century. His famous 'The Magic Barrel'with its broken characters broken Yiddish sufferings disappointments and strange poetic intensity is perhaps the most well- known and emblematic of his general approach as a writer. Malamud is a man of the precise word, the carefully drawn artistic touch, the minor note of beauty which suddenly pains. Malamud is the person of sympathy with the sufferings of his own characters, and with the ideology that this suffering is what makes them most human . In another sense the suffering is what defines the Jews and is where Judaism too becomes emblematic of what humanity is. Malamud travels in different worlds for his stories in the Italy of Fidelman , and in the far off Western regions of America where Jews are very rare and distant strangers. Of the many different kinds of encounters in his story he makes his own poetic universe, touched with small irony, and with a Yiddish bittersweetness. These are stories for those who love the high art of small tones and intuitions of one of the finest story- writers of his time.

One good story after another in this huge collection

Published by Thriftbooks.com User , 21 years ago
Malamud is a wonderful storyteller. He creates compelling characters and vivid settings in every story. He brings people and places to life in just a few sentences. My favorites are the early stories, very short stories set in New York in the late 40s and early 50s. At the end of each story I wished he had written more, but wondered if the characters would have been less interesting if he had. There are many excellent longer pieces as well.

Published by Thriftbooks.com User , 22 years ago
Malamud's stories capture and bring alive the post world war years in New York City, with Jews as the central characters. I came to these stories after I exhausted all of Malamud's novels. For those who are not familiar with Malamud, wherever you start, his novels or these short stories, you will be grateful you did.
Copyright © 2020 Thriftbooks.com Terms of Use | Privacy Policy | Do Not Sell My Personal Information | Accessibility Statement
ThriftBooks® and the ThriftBooks® logo are registered trademarks of Thrift Books Global, LLC