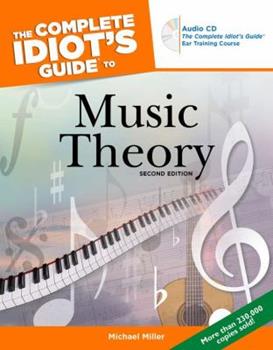 "A music theory book that hits the high note " This updated and expanded edition of "The Complete Idiot's Guide(r) to Music Theory" breaks down a difficult subject in a simple wayeven for those who think they have no rhythm or consider themselves tone deaf. With clear, concise language, it explains everything from bass-clef basics to confusing codas. This new edition includes: -A brand-new CD -A comprehensive ear-training section -Musical examples...

Great accessible guide to music theory - especially for the beginner

Published by Thriftbooks.com User , 16 years ago
My background is in engineering and computer science. However, I do a lot of multimedia programming, and when it came to writing code for computer music I was at a loss because I have no formal musical training whatsoever. I've never played an instrument and I probably never will. However, I found it disabling to be unable to read music or understand the language of music theory when it came to reading the many helpful works on computer music that are in print and on the web. This book appeared to be what I was looking for and it turned out I was correct in my choice. It takes you from the absolute beginning, assuming you can't even read music, and takes you from intervals through phrases through counterpoint and into composition and performance. There are very helpful exercises at the end of every chapter with solutions at the end of the book, making this a good choice as a textbook or an excellent and inexpensive means of self study. Part one talks about the notes of a scale,the different types of clefs and staves, the intervals between notes, major and minor scales, and keys and key signatures. Part two, on rhythm, starts by teaching you what simple whole notes are and moves on to sixteenth notes and syncopations. Also covered are time signatures, tempo and dynamics, and how to navigate through a piece of music. In part three, Tunes, you learn how to put tones and rhythms together to create a melody. Next you learn how to add chords to your tunes and find out about chord progressions and song forms. At this point, you have what you need to create your own pieces of music. Part 4, on accompaniment, teaches you how to train your ears so you can write down music as you hear it. You'll be able to create simple accompaniment parts on piano or guitar. Last, this section shows you how to take a song in one key and transpose it to a totally different key. Part 5, on embellishment, shows how to fill out your music with harmonies and counterpount, and how to add fancy chord substitutions to your tunes. The last section is on arranging music. It talks about how to write for specific voices and instruments and how to create attractive master scores and lead sheets. You also learn how to conduct your music in front of a choir, band, or orchestra. The appendices contain a complete glossary of terms, a chord reference, and answers to the chapter exercises. I read the entire book, although parts one through three, which focuses on music literacy, are what I concentrated on because it coincided more to my needs. Parts 4 through 6 are more on performance and composition. I was so impressed by the book that I also bought "Complete Idiot's Guide to Music Composition", which I found equally accessible. I highly recommend both books. Note that there really is very little difference between the first and second editions of this book, which makes sense because music theory does not change much over time. The parts of the second edition of book and chapters that

Published by Thriftbooks.com User , 19 years ago
Music theory is often seen as unnecessary and boring to even the most musically inclined persons. Many see it as a hindrance to their natural creativity. However, without a sense of music theory, nobody will progress from playing music, to understanding and even writing music. I took a music theory class in college and used a textbook that tried to say the same things that Miller says, only the textbook was far more confusing. I think this book would actually make a fine textbook for an "Intro to Music Theory" class. He covers most basic topics, even assuming that the reader has no music knowledge. This is good for beginners, but for me it meant that I only skimmed the first few chapters. He does cover more advanced topics such as harmony, counterpoint, transcribing from audio, and transposing. At the end of each chapter, he has quizzes to review and test what was learned in the previous chapter. He includes most important topics in music theory, including scales, pitches, rhythm, melodies, chords, chord progressions, phrases, transcribing, arranging, writing lead sheets, and performing. At the end, the book has a glossary, a guitar and piano chord reference section, and answers to the quizzes at the end of each chapter.Overall, this book has many good qualities. It is very readable and interesting. He also is able to convey difficult topics in an understandable way without sacrificing his point. Most music theory textbooks cannot do this, and overwhelm the reader. I would say this book is best for students who need an easy-to-understand book to complement a more advanced book, to clarify what they have learned in a music theory class. It is also good for musicians who don't want to be experts in music theory, but who wish to further their musical abilities. However, as I have said, it also works on its own, and I believe rivals many textbooks that are five times as expensive.

Published by Thriftbooks.com User , 19 years ago
This is a great book for someone who wants to understand basic music theory. Most books I have looked at assume a fair knowledge to begin with. Not so here. The author assumes that you are starting from scratch and takes you through everything from reading music, to composing melodies, to chord construction and beyond. I have played guitar since high school, but never really understood musically what was behind what I was doing. I have wanted to write songs, but have been intimidated by my lack of knowledge of theory. This book has given me the knowledge I need to get started.
Trustpilot
Copyright © 2022 Thriftbooks.com Terms of Use | Privacy Policy | Do Not Sell or Share My Personal Information | Accessibility Statement
ThriftBooks® and the ThriftBooks® logo are registered trademarks of Thrift Books Global, LLC