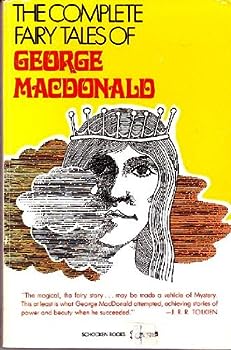 This description may be from another edition of this product. George MacDonald occupied a major position in the intellectual life of his Victorian contemporaries. The Complete Fairy Tales brings together all eleven of his shorter fairy stories as well as his...

Published by Thriftbooks.com User , 12 years ago
George MacDonald was one of those rare writers who speak the language of dream and fairy-tale like a native. Shorter pieces in this style tend to work best, so it's fair to say that this book shows MacDonald at his finest. The stories vary widely in tone. The good-humoured courtly teasing of "The Light Princess", the darker Celtic fairies of "The Carasoyn". The curious folklore variations of "The Wise Woman" with its delightful opening: "There was a certain country where things used to go rather oddly". "The Day Boy and the Night Girl", part fairy-tale, part new-made myth and part dream-like parable, a story only George MacDonald could have written. Three excerpts from the full-length children's book "At the Back of the North Wind" have been included, two dreams and the inset story "Little Daylight". These sections help to give that book its wistful, mystical atmosphere: because the author was as near to being a mystic as a good Protestant can be. ("Where did you come from, baby dear?/ Out of the everywhere into here.") Best of all is the indescribable "Golden Key". Here MacDonald refines and perfects the sheer dream-flow he used in the grown-up novel "Phantastes", creating a haunting narrative that defies interpretation. If you do nothing else in life, read "The Golden Key". But all these stories brim with the whispered untranslatable wisdom that belongs to fairy-tale. For those who don't know MacDonald, this is the ideal place to start. Essential for anyone interested in wonder-tales or Victorian children's writing, highly recommended to anyone everyone else. Many of these stories can be read to children, but some may be considered too wordy. Why are there no illustrated versions in print?

Published by Thriftbooks.com User , 13 years ago
George MacDonald has quickly become one of my favorite authors with this collection of work here. I had already read The Golden Key and enjoyed it, and wondered if his other works were similar. I was not disappointed. The only negative thing I can say about these stories is The Light Princess slows down a bit in the middle, and The Wise Woman starts off kinda slow. Everything else is top notch. Sure, someone could argue that The Shadows is as inconclusive as a story gets, but you know; that really didn't bother me. Anyway, MacDonald has an argument for the existence of inconclusive stories at the end of The Wise Woman for folks who want to make something of it. Now for a brief synopsis of each story that's contained. Most of these stories are taken from some of MacDonald's full novels: The Fantastic Imagination Essay is quite amusing, particularly when it discusses how you can ruin a fairy tale completely by simply inserting a gentleman with a cockney accent. I'd like to try that some time. The Light Princess isn't a story about a girl who gives out magical glowing light. It's about a princess who's so light in weight that she floats. This misinterpretation of the title actually did disappoint me, and that's probably the reason I thought the story was a little slow in the middle. But I enjoyed what was there, even if it wasn't the best demonstration of MacDonald's wild imagination. The Shadows is a downright creepy story for the first few pages, and then the narrator takes us into the church of the shadows, where the shadows simply tell random stories, most of them fairly light-hearted. A boy thinks that shadows are ghosts that got all black from getting stuck in a chimney. Pretty logical for a kid if you think about it. The Giant's Heart is the most violent story out of the bunch. Some evil giant keeps his heart in a bird's nest for some inexplicable reason. Maybe the story explains why, but the reason still remains inexplicable. Kids ride on top of spiders, and you pretty much get a good feel for George MacDonald's writing style here. Cross Purposes is probably my favorite story in this entire collection. It's so wild I forget the plot. Environments come and go through sudden changes, and vanishings, and what-not. It's like being in a dreamworld. I think it's about a princess and a goblin who bring two kids together, and the kids grow from hating each other to loving each other. This is not the same story as The Princess and The Goblin by George MacDonald, because I believe The Princess and The Goblin is a much longer story, although I haven't yet read it. A friend of mine told me he thought The Golden Key is insane, and it is. It's much like Cross Purposes, where the environment's changing all over the place. We see two kids who appear to be walking for some reason, and they talk to a parrot fish with an owl's head that cooks itself, and they grow really old, and they walk up a rainbow like it's a giant staircase.

From the first master

Published by Thriftbooks.com User , 18 years ago
George MacDonald, a 19th-century minister from Scotland, may be the earliest writer of fantasy as we know it today. He was a prolific writer and an influence on grand masters C.S. Lewis and J.R.R. Tolkien, and here some of his less-known (but well-written) works.First of all is his essay on "The Fantastic Imagination," where he discusses fantasy, fairy tales, and the nature of childlike innocence. There are also short stories, such as the novella "Light Princess," about a girl who is a lightweight in mind AND body, excerpts from the dreamy fantasy novel "At The Back of the North Wind," the haunting "Shadows" that appear for a king, a "Wise Woman" who sweeps away an obnoxious princess, and several others.MacDonald's stories have the sort of rich, compelling prose that the best of 19th-century literature has. His stories are full of creepy creatures, magical women, golden keys and dreamy atmosphere, the sort of stuff now written by Jane Yolen and not many others. But they're also more grounded and traditionally fairy-tale-like than the stories of later writer Lord Dunsany. Rather, you can see how Lewis and Tolkien would have both enjoyed and been influenced by MacDonald.A good selection of short stories and a thought-provoking essay, definitely for fans of fantasy and fairy tales. Delightful.

Published by Thriftbooks.com User , 21 years ago
I find it such a pity that this literary genious is not more widely read! This particular book, I have read and re-read so frequently in the last 8 years that I may soon be forced to purchase it again. The cover has been rolled into a perpetual "O" and so many pages have been dog-earred and folded, that it has become rather hard to read. Needless to say, I have found this book one of the most enjoyable of the many many books I've read during my 17 years of life. The stories contained in this book are exceptionally enchanting and the symbolism superb! They have undoubtably had a strong influence on my own writing style.I would recommend George MacDonald over all other authors (with C.S. Lewis and J.R.R. Tolkien a close second and third). And I would recommend this book to fantasy readers over any other piece I've read.

Published by Thriftbooks.com User , 21 years ago
This is an exceptional compilation from an exceptional writer. Should I say a master of myths as his writing is not what one woul call first class. MacDonald has a way of making the story,and story behind the story,one so as to not lose the plot for some greater meaning. Never does the plot become secondary or the meaning diminished. Fabulous!
Copyright © 2020 Thriftbooks.com Terms of Use | Privacy Policy | Do Not Sell My Personal Information | Accessibility Statement
ThriftBooks® and the ThriftBooks® logo are registered trademarks of Thrift Books Global, LLC