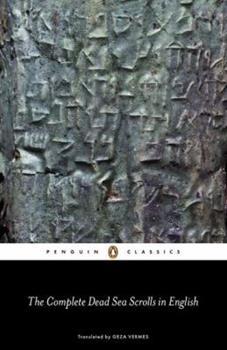 A newly updated edition of the landmark translation by one of our greatest religious scholars Since its publication in 1962, esteemed biblical expert G za Vermes's translation of the Dead Sea Scrolls has established itself as the authoritative standard. The original manuscripts, discovered in the Judean Desert between 1947 and 1956, completely transformed our understanding of the Hebrew Bible, early Judaism, and the origin of Christianity. Now in...

This is how this book stacks up

Published by Thriftbooks.com User , 19 years ago
This book needs to be considered alongside _The Dead Sea Scrolls Translated_ edited by Florentino Garcia-Martinez. Both are "comprehensive" translations of the Dead Sea Scrolls which have become available since the end of the embargo in the fall of 1991.Wise, Abegg, and Cook organize this book primarily by the Qumran manuscript number. The exceptions are the manuscripts found in Cave 1 which have no number. These appear at the beginning of the book along with other manuscripts which relate to the same text. So for example, the Thanksgiving Scroll appears at the beginning of the book along with 4Q427-432. The Damascus Document also appears at the beginning of this book along with manuscripts Geniza A and B.At the end of the book there is a helpful index of DSS manuscripts and the page(s) on which they may be found. There is also an index of references to other liturature, the Hebrew Bible, the New Testament, and Rabbinic texts. So for example the editors find some connection between 4Q525 and Matthew 5.3-10. Both are beatitudes.It is not a disadvantage of this book that it contains no Hebrew texts. I find that I want to look at photos of the manuscripts and judge the translations for myself. Nor is it a disadvantage of this book that it does not contain any biblical texts. Those may be found in a translated form in Martin Abegg's _Dead Sea Scrolls Bible_.The advantage this book does have is its commentary. The editors have brought numerous significant items to the the attention of the reader which the non-specialist probably had not noticed. Even so, the commentary will bring some enlightenment to DSS specialists as well.

A word of caution about objections to this fine work

Published by Thriftbooks.com User , 21 years ago
There is no better translation available to English language readers than this volume by Vermes. The objections registered by some ill-informed conspiracy-theorists concerning Vermes are themselves based on no real evidence. Vermes has an opinion, a very well-informed scholarly opinion, formed from years of study--honest study. He is not a flaming seeker of fortune and fame as are many people who try to make much more out of what is in the DSS than anyone can possible know. As one trained as a scholar in this area of study, I offer two observations: First, my own word of caution: Beware of DSS conspiracy theories and wild claims made from esoteric so-called readings of the texts. Second, my advice: Read the Scrolls in this fine translation for yourself and ask whether Vermes's ideas are reasonable or whether the wild allegorical re-readings offered by certain flamboyant interpreters have any real merit.
Trustpilot
Copyright © 2022 Thriftbooks.com Terms of Use | Privacy Policy | Do Not Sell or Share My Personal Information | Accessibility Statement
ThriftBooks® and the ThriftBooks® logo are registered trademarks of Thrift Books Global, LLC