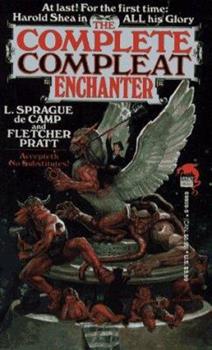 (Part of the The Incompleat Enchanter Series)

Due to popular demand, Harold Shea of The Compleat Enchanter has had new adventures which have been published separately as The Enchanter Completed. Now, Baen Books presents a single volume of all the adventures of Harold Shea, master logician and wizard without peer.

The Magical Misadventures of Harold Shea

Published by Thriftbooks.com User , 19 years ago
One rarely thinks about this, but there actually was terrific heroic fantasy being written before Tolkien published the Lord of the Rings, and L. Sprague de Camp and Fletcher Pratt were at the forefront of such efforts. These magical misadventures of Harold Shea, psychologist turned multiverse knight/magician/hero are thoroughly entertaining and amazingly detailed. The Complete Enchanter consists of the two novellas The Roaring Trumpet and The Mathematics of Magic (published together as The Incomplete Enchanter) and a follow-up novel The Castle of Iron. Sorting out the different versions of these books can be somewhat confusing, but basically this set consists of the original trilogy of "books" recounting the adventures of Harold Shea. Shea is a smallish man who continually takes on affectations such as unusual modes of dress in an effort to lift his spirits out of the mundane environment of his life. When his boss comes up with a logical theory for traveling among different universes, Shea takes the initiative and put the theory to the test. Aiming for mediaeval Ireland, Shea actually finds himself in a bitterly cold environment where he meets up with Thor and the three other principal gods of Norse myth. Deciding to pass himself off as a magician, he soon finds himself involved in preparations for a final world-ending battle between the Norse gods and a group of malicious giants. In many ways this is my favorite Shea story because it is here that he finds, to his own amazement, that he can handle a sword with some degree of skill (as long as it has a sharp point at the end) and can actually perform some feats of magic. After managing to return to good old present-day earth, Shea soon sets out on another journey, this time with his boss Dr. Chalmers along for the thrill-seeking ride. Their aim is true, placing them inside the world of Spencer's Faerie Queen. Here Shea finds himself in the company of both noble knights and rogue "black" magicians bent on defeating the good and noble paladins and destroying the enchanted world. In this mediaeval setting, he hones his fighting skills, struggles with his magical spells (as does his colleague Chalmers), and meets up with the red-haired beauty of the woods Belphebe. Chalmers, for his part, becomes enchanted with the lady Florimel, who unfortunately is a not quite human reproduction (formed of ice and snow) of the original Florimel. The Castle of Iron finds Shea back in his own time and space again, trying to explain to cops the manner in which his wife has disappeared. Suddenly, he, two cops, and two of Shea's colleagues find themselves transported to another world Shea soon realizes is Xanadu, but soon Shea and his annoyingly rash colleague Vaclav are whisked magically away to a castle of iron in an ancient Moor kingdom (the world of "Orlando Furioso"). The plot of this novel confused me a little, but basically Chalmers has bidden them there to help him achieve a truly human form for

The Incompleat Enchanter Trilogy by DeCamp and Pratt

Published by Thriftbooks.com User , 20 years ago
I originally found the first book, "The Incompleat Enchanter", at a flea market back when I was in my early teens in the late 60s, it was an old paperback, and I loved it! At the time I was fascinated with magic as well as math and science and I loved the way De Camp and Pratt intertwined the two! It had since fallen apart and was lost in my move to California. Anyway I found and read the "Faerie Queene" and "Castle of Iron" universe books (as well as the "Wall of Serpents" book later on) as a teenager and found them all to be excellent. I have purchased this collection so that my son (in his early teens) can read the stories as well, I'm sure he'll love them! I'm sure you will as well!

One Of My Favorites

Published by Thriftbooks.com User , 20 years ago
The place: a town in Ohio. Two psychologists, Harold Shea and Doc Chalmers, have made an amazing discovery: by altering their logical assumptions, they can visit any world they choose. Of course, it is difficult to tell beforehand exactly what world they're going to visit... These stories are hilarious and extremely readable, though you shouldn't expect anything terribly deep. This volume collects all of the original Harold Shea novellas into one book. This makes it something of a one-stop buy for anyone who wants to read them, especially since the original volumes are out of print. There are other in-print Shea stories, but they weren't written by the De Camp-Pratt team, so they're not nearly as good. They're still worth a look if you're bored. though.

Published by Thriftbooks.com User , 20 years ago
Remember that Sprague and Pratt wrote this before LORD OF THE RINGS and only a few years after the hobbit. There weren't as many fantasy books to draw upon either.Great system they set up for how magic works through mathematical formulas. Not too confusing either for people like me who don't care for math either.The book is divided into three books that cover different mythologies: the first being Norse where Harold Shea, our hero, gets to meet some of the Norse Gods as they travel in to giant territory; second being in Spenser's THE FAERIE QUEEN where he gets to meet his future love interest; and THE CASTLE OF IRON which if based on an old epic poem that wasn't finished.This book mixes humor, action and clever tactics. Shea isn't the big bruiser type although he carries an epee and knows fencing which lets him beat a lot of people. He also is smart in that where the big bruisers with him find they can't get out of a jam, he's there to outthink his opponents. Oh, and, of course, he also knows magic but sometimes that messes up or does things differently.For its time and even today, a great book for fantasy fans. Alternative History buffs should also check out LEST DARKNESS FALL (a history professor helps Rome from not collapsing . . . sort of, that is).

Published by Thriftbooks.com User , 23 years ago
This was one of the books which was instrumental in my developing a love of fanstasy writing. It combines adventure, romance, mythology and the "science" of magic in a light style which reads quickly and easily. A must read for any who enjoy fantasy.
Copyright © 2020 Thriftbooks.com Terms of Use | Privacy Policy | Do Not Sell My Personal Information | Accessibility Statement
ThriftBooks® and the ThriftBooks® logo are registered trademarks of Thrift Books Global, LLC