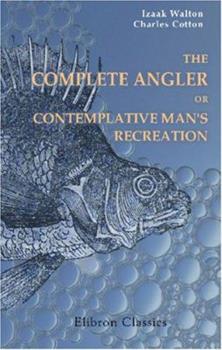 This Elibron Classics title is a reprint of the original edition published by John Johnson in London, 1849.

Published by Thriftbooks.com User , 14 years ago
Five days of fishing along the river Lea which joins the Thames near London is the background on which the cheerful narrative of The Compleat Angler is laid. The splendid civil conversation of Latin named Piscator, Venator, Auceps, Viator, and Piscator Junior is a joy to hear. Shakespeare was just publishing his first work when Izaak Walton was born in 1593 in Stafford. Walton retired in his early fifties and traveled about rural England visiting friends, fishing, and writing in his easy-going fashion. After publication of The Compleat Angler in 1653 he continued to add to it in his leisurely way for the next quarter century. Samuel Johnson praised the book in the eighteenth century and later Charles Lamb recommended The Compleat Angler to Samuel Taylor Coleridge. 'It breathes the very spirit of innocence, purity, and simplicity of heart,' he noted. 'It would sweeten a man's temper at any time to read it; it would Christianise every angry, discordant passion; pray make yourself acquainted with it.' The Compleat Angler is a true classic of English literature that owes it's esteem not to advice about fishing but to Izaak Walton's pre-occupations and exquisite manner. Subtitled The Contemplative Man's Recreation the pages glow with delight in the hills and dales, woods and streams of the beloved countryside. Walton conveys a message of meek thankful fellowship and peace to all "honest, civil, quiet men". 'The Compleat Angler is not about how to fish but about how to be,' said novelist Thomas McGuane. 'Walton spoke of an amiable mortality and rightness on the earth that has been envied by his readers for three hundred years.'

Published by Thriftbooks.com User , 15 years ago
This is surely one of the earliest books available to the modern angler. But it's worth distinguishing 'anglers' from 'fishermen'. I take 'anglers' to be people who go after fish for fun or sport or pleasure and 'fishermen' to be people who go after fish for work. The first thing to be said about Izaak Walton's book, is that it is a play followed by a text book. The second thing, is that it's in a foreign language even to the English, because it was first published in 1653 when the author was 60. A ripe old age in England in those days. Walton was essentially a biographer. He got paid for it - often commissioned as a good artist might. He wrote 'The Life of Donne' - a poet who even I've heard of. He's alleged to have been a prosperous merchant, but it doesn't really matter. Great angling writers like Richard Walker were engineers. Old school writers like George Skues, were public school educated solicitors in London practices who took the train to the chalk streams of Winchester in Hampshire at weekends, tying flies as they went. The play concerns three people who meet by chance and get into conversation about their interests. They're travelling at a walk, and so they lighten their journey with convoluted conversation. Before long, it develops into a bit of a competition. Walton is the angler (Piscator). Another gentleman is keen on falconry (Venator) and yet another is keen on hunting (Auceps). If you tire of 17th century banter, skip forward to the chapters on each particular species of fish, which will ring true immediately. To me it's a revelation that these friendly old fish will still fall for the same tricks as Walton was playing on their ancestors over 350 years ago.

Worth a space on your fishing/philosophy bookshelf

Published by Thriftbooks.com User , 17 years ago
Walton uses the perspective of an enthusiastic angler to promote a lifestyle of reflectiveness, gentle humor, and appreciation for nature. The book is easy to read, despite being first published in the 1600s. The Coachwhip Publications reprint edition (ISBN 1930585209) is inexpensive and contains Cotton's "Part 2," written at Walton's request for the fifth published edition of "The Compleat Angler."

A CLASSIC of English Literature!

Published by Thriftbooks.com User , 20 years ago
I have had this book beside me for more than 20 years, not for its guidance about fishing (though this is pleasant), but for the simple, unaffected but eloquent beauty of its 17th century prose. A lovely, idealized, Arcadian sort of England comes to life, and it is a very nice place in which to dip your mind a while.

Published by Thriftbooks.com User , 22 years ago
A lovely ramble with a fascinating old gentleman, quaint, charming, sunny and a true picture of one aspect of a bygone age and of the way our great-great grandfathers talked and lived. The fishing lore and natural history are hopelessly out of date but who cares? Has been in print for centuries and deservedly so.

The Compleat Angler Mentions in Our Blog

When today's college students are reading, their literary canon is centered on textbooks, course related articles, and manuscripts. Only a few students create the opportunity to read beyond the confines of their coursework and for many this is a missed opportunity. What about the books that will help you make the most of these precious years, not just the years that come after?