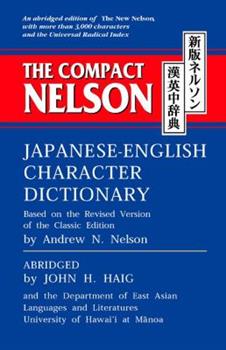 "This new compilation offers many advantages...As an example of a book design, little more could be asked of this volume."-- Harvard journal of Asiatic Studies The Compact Nelson is an abridged edition of the revised New Nelson Dictionary , Dr. Andrew N. Nelson's award-winning classic work. An invaluable guide for learning Japanese, this book has the following features: 3,068 main character entries and more than 30,000 character compounds--all the...

Published by Thriftbooks.com User , 12 years ago
This is an excellent dictionary for any student learning Japanese kanji. Unless you have someone show you how to use it, you may be a bit lost on how to find a kanji. Definitely an essential tool for studying the Japanese language.

Published by Thriftbooks.com User , 14 years ago
I'm not a professional, nor am I anywhere near fluent in Japanese, but the Compact Nelson dictionary is pretty useful! Just starting my third year of the language, I have found it indispensable to me. To those who say it's 'hard to use,' I suggest actually reading the directions. They're pretty simple, and from there, it really is a snap to use. I have yet to run into a kanji that I have not found (though admittedly I haven't tried translating anything just yet.) I suppose it's best to say that it's a superb dictionary for students, as it's quick and easy to flip through and find basic kanji.

Published by Thriftbooks.com User , 20 years ago
Nelson's has been the standard for English-language Kanji Dictionaries for some time now. One of the reasons might be its similarity to Japanese-language Kanji Dictionaries, both in its look-up system and sheer number of characters.And this is perhaps its strongest aspect: even though this is the abridged version of this dictionary, the 3,000 some-odd characters compares, for example, to the UN-abridged NTC's. And of course, the unabriged Nelson's 7000+ characters is nearly exhaustive. There is little in the way of stroke order or usage information, but for sheer number of entries, it is really only rivalled by Japanese-language Kanji Dictionaries.The look-up system can be cryptic at times...but this shouldn't be surprising. Welcome to the world of Kanji. What is intuitive for one person is mind-boggling for another. The addition of the Universal Radical Index proves to be helpful in most instances when you just can't figure out which radical that character is listed under. Most instances.I've been using this dictionary for a couple of years now, mostly translating contemporary literature, and have had little need for any other Kanji dictionary. It isn't perfect, but it is a great resource. Take this on the road with you, and keep the unabriged Nelson's at home and you can't go wrong.If this doesn't do it for you, I guess it's time to buy Morohashi's Dai Kan-wa Jiten, which has some 50,000 characters and is so authoritative it has been translated into Chinese.

Published by Thriftbooks.com User , 21 years ago
This is the best Japanese dictionary I have come across in all three years of my language studies. It is comprehensive, easy to use and just all around wonderful. My only complaint would be that the print is a little small, but that is only because they packed so much good stuff into it! Buy this book! It will help you ace your next Japanese final, trust me.
Copyright © 2022 Thriftbooks.com Terms of Use | Privacy Policy | Do Not Sell My Personal Information | Accessibility Statement
ThriftBooks® and the ThriftBooks® logo are registered trademarks of Thrift Books Global, LLC