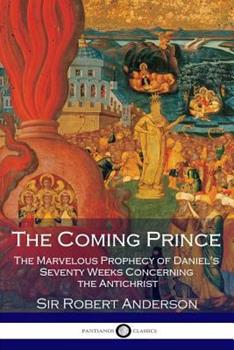 The Coming Prince : The Marvelous Prophecy of Daniel's Seventy Weeks Concerning the Antichrist

Sir Robert Anderson's commentary on the Book of Daniel is his most famous and respected work of Biblical narrative. This edition contains the author's notes, his appendices and the chronological tables. Anderson begins his investigation with a description of Daniel's era, wherein the Jewish peoples were pit against the Egyptian Pharaoh and other adversaries. The various prophetic visions and the sequence in which each occurred is established by Anderson,...

Published by Thriftbooks.com User , 13 years ago
Sir Robert Anderson (1841-1918) was a trained solicitor and intelligence officer who became Assistant Commissioner of the Metropolitan Police and Chief of the Criminal Investigation Department (Scotland Yard) during the Ripper Scare. He was widely credited with bringing London's notorious crime under control. However, Sir Robert was also a committed Christian. This fascinating book is the fruit Sir Robert's examination of Daniel's prophecies of the end of the world, focusing in on the future Prince who will attempt to destroy Israel. In it, the author shows the thoroughness and eye for detail that was the reason for his advance to the very pinnacle of British criminal investigation. Overall, I found it to be a fascinating read. You would expect that such an old work would be dry and academic, but the author did such an excellent job that it is still a great book these 100 years later! So, if you want to read a fascinating book, one that should rightly be considered a Christian classic, then get this book. I highly recommend it!

Recommend to both Jew and Christian

Published by Thriftbooks.com User , 14 years ago
The Coming Prince is not a book for the casual Bible reader, it is a must have for serious students of Old Testament prophecy. Sir Robert Anderson gives the most satisfying explanation of Daniel's seventy weeks. He weaves facts, Jewish history, and geography with scriptures to pour light on the meaning of the 9th chapter of Daniel. This book is stunning in it's portrayal of end time events. There is something for both Christian and Jew in this book and I would highly recommend it to both groups.

Published by Thriftbooks.com User , 19 years ago
Anderson was an investigator and he tackles the prophecy of Daniel and the accumulation of evidence like a pro. When he wanted to know exactly when the moon would rise in a given year he wrote to the Astronomer Royal (who responded). He writes in a somewhat flowery and formal style and there is very little devotional content. Although I'm sure he was a devout believer he is not setting out (in this case) to 'lift Christ up'. He was living in a time when higher and lower criticism were attacking the book of Daniel and he sets out to put forward a 'case' for the simple truth of scripture.In his beliefs he appears similar to Arno C Gaebelien (who has done an excellent book on Daniel too).Anderson settles for a 'traditional' pre-millenialist view of Daniel.I don't think I would recommend this as a first commentary on Daniel or possibly even as a second. But for someone who has already gotten embroyled in all the controversy surrounding the book then this is an extremely scholarly work that HAS to be read, if only because you want to dis-agree with it!

A deep and clear biblical study

Published by Thriftbooks.com User , 21 years ago
I was amazed with the deep biblical knowledge I found in this book. As a commom man who likes to study I was enriched with the prophetic study and many other information about people, kings and dates mentioned in the Bible. I do recommend its reading to everyone who believes the Bible is the true word of God and wants to know more about prophecy.

No wonder he busted Jack the Ripper!

Published by Thriftbooks.com User , 22 years ago
Sir Robert Anderson, inspector of Scotland Yard, and careful Bible student not only busted The Ripper, but went on to investigate with painstaking care the Great Prophecy of Daniel's 70 hebdomads. With the care and precision of his Scotland Yard background, Anderson reviews the 69 weeks of the Great Prophecy, dots the yods and crosses the tittles (are there such things in Chaldee?) and brings us to a precision rendezvous with the planned (2nd) triumphal entry of the Lord Jesus Christ in the Gospel of Mark as the fulfilment of the 69 weeks.The great care he takes demonstrates that he was no clergyman, but a real Bible student.Ignore the man behind the curtain, D. Pentecost could never have done this work. This fellow may be second only to EW Bullinger as a recent and real Bible student.
Copyright © 2020 Thriftbooks.com Terms of Use | Privacy Policy | Do Not Sell My Personal Information | Accessibility Statement
ThriftBooks® and the ThriftBooks® logo are registered trademarks of Thrift Books Global, LLC