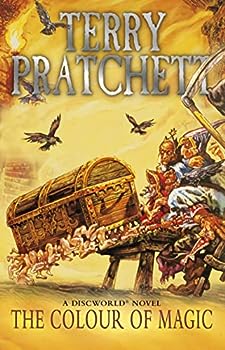 The colour of Magic

The first novel in the hilarious and irreverent Discworld series from New York Times bestselling author Terry Pratchett. A writer who has been compared to Mark Twain, Kurt Vonnegut, and Douglas Adams,... This description may be from another edition of this product.

Published by Mistress Alfredo , 7 months ago
Terry Pratchett is incredibly fun and funny to read. This book was in great condition for the price and I really enjoyed reading it. The shipping was also really fast.

There were lots and lots of little legs

Published by B. Harding , 8 months ago
Words to describe this book... I've been a fantasy reader a long time. I've read some terrible fantasy novels. I've read some amazing ones. I've read some in between ones. This is probably one of the best books I've ever read. It takes the tropes of fantasy novels and turns them upside down, spinning out into the multiverse, and everywhere in between. I don't know what I was expecting when I read this but it wasn't this. It was hilarious and while not as thought provoking as some of the later books, it doesn't need to be and it still forces you to look at fantasy novels in a different light. And that ending, after several read throughs, is just brilliant. Wow. I don't know if I've ready any fantasy authors quite like Pratchett. The only book that I can think of that is in the exact same social circles, as it were, would be The Princess Bride by William Goldman.

Published by Thriftbooks.com User , 17 years ago
Open the door to your mind and let a bizarre vision enter. It's a Discworld, resting on the backs of four elephants, who stand on a massive tortoise swimming through space. There's magic here, symbolised by the eighth colour of the rainbow - octiron. There's little magic done in this story, but the tale itself is more compelling than any stage sleight-of-hand. For while there are trolls, dryads, barbarian heroes, it is the real people who are the focus. Publishers, notorious for lacking a sense of humour, label this book "Fantasy". Don't be fooled. This book is the first step in a journey to face ourselves - a tramp to realms of reality, presented with wit and wisdom.Rincewind, a failed "wizzard" is given the task of guiding, and guarding, the Discworld's first tourist. Originating in the Counterweight Continent, Twoflower is an insurance clerk. He knows about the "reflected sounds of the underground spirits" - echo-gnomics. Introducing the concept to the denizens of Ankh-Morpork, the Disc's greatest city, proves disastrous. Rincewind, who knows the City is experienced in disasters, is more concerned with his own survival, which is threatened at every turn. Yet, like the City, he bounces back to confront the next crisis. He has some help, in the form of one of the Eight Spells, which, if improperly invoked, may distort Time and Space. It's a heavy responsibility, especially for one who's so adept at dodging such burdens.While the magic is subdued, nothing subdues the gods but each other. Overseeing the Discworld, the panoply of deities idle the days with The Game. The contenders, Blind Io, chief of the gods, Offler the Crocodile God, and Fate, cast dice to guide the movements of the Board's pieces. These, of course, are Rincewind and other denizens of Discworld. Logic says Fate must be the ultimate winner, but The Lady is a strong opponent. She is the one goddess who arrives at her own whim, as Rincewind learns to his distress.All these deities, characters and events are presented in the most compelling style. Pratchett is a master of language and offers levels of wit, pathos, characterisation and story rarely matched and never excelled. He also adds science to a field usually devoid of real knowledge. The combination is explosive, while demanding reflection. For that is the purpose of his writing - to mirror another world, ours. There's a laugh per page, but when you've wiped your eyes, you'll realize there's far more here than humour. Start with this volume and be prepared to continue the trek. [stephen a. haines - Ottawa, Canada]

The color of humor

Published by Thriftbooks.com User , 17 years ago
Fantasy has never been one of my favorite genres, but I decided to give the magical world of Discworld a try at the suggestion of several friends. I am very glad I did. This turned out to be a very different kind of fantasy, in spite of its wizards, trolls, and dragons. Discworld is a flat planet resting on the backs of four elephants riding on the back of a turtle that slowly makes its way across the universe. As strange and steeped in magic as Discworld is, it seems suspiciously like our own world. Its inhabitants have some very familiar vices and pastimes. Author Terry Pratchett is a wonderful cross between Douglas Adams, Piers Anthony, and Mark Twain, and his Discworld novels are full of great fun, inventiveness, and wicked satire."The Color of Magic" is the first story in the series. This paperback edition comes with an appendix that makes a handy travel guide for first-time tourists of Terry Pratchett's amazing fantasy land. It includes a brief musing on Discworld, a synopsis of the main cast of characters in the series, a nonmap (after all, how can a sense of humor be mapped?), a guide to Discworld on thirty dollars a day, and even a crossword puzzle to quiz you on what you have learned on your maiden voyage.The bumbling wizard Rincewind, a wizard college dropout and the quintessential coward, is appointed as guide and protector for the four-eyed tourist Twoflower, who hails from a gold-rich city on the Counterweight Continent and who has come to the bustling metropolis of Ankh-Morpork to see the sights. As the story opens, Ankh-Morpork is in the process of burning to the ground, and Rincewind and Twoflower are fleeing to safety. Accompanied by a frightening piece of many-legged luggage, the twosome experiences one misadventure after another. They are threatened by thieves and magic spells, made pawns in a dice game of the gods, dogged by Death, chased by dragons around the upside-down mountain of Wyrmberg, and shipwrecked at the edge of Discworld. The end of the story leaves the reader hanging in midair (literally), but that's OK - because there are many more volumes that follow in this richly creative and hilarious series. These novels are like potato chips - bet you can't read just one!Eileen Rieback

Published by Thriftbooks.com User , 21 years ago
After reading some heavier material, I picked up the first Discworld book and was very pleased. I feel like lots of fantasy writers fail to write compelling stories because they spend most of their energy trying to convince the reader their world is real and gritty and serious. Not Terry Pratchett. There's not a serious bone in this book's body. It's funny from start to finish and slaps nearly every fantasy convention in the face, repeatedly, and without regret. The characters are memorable, from the inept Rincewind the wizard (who doesn't really do anything very wizardly) to the tourist Twoflower (whose delightful naivete carries the book forward when it seems cornered) to the Hrun the Barbarian (testosterone anyone?) and finally to the Luggage (a dedicated chest made of sapient pearwood that has quite the appetite when it comes to munching bad guys). I recommend this book to people who love fantasy and possess even just a single ounce of humor. Pratchett caters to the absurd lunatic in us all, and delivers a very silly, very satisfying story on a pretty platter called Discworld.

Published by Thriftbooks.com User , 21 years ago
Previous to picking up Terry Pratchett's first Discworld novel I'd never read much SciFi or fantasy except the "Red Dwarf" novels. Well, I can tell you I've read lots of humorous fiction and I've never found any other book so consistently hilarious, with so many brilliant characters and dazzlingly original ideas. The pages of this book practically leak imagination out onto your fingers when you pick it up--it's THAT good.The opening chapter (especially the brilliant bits about the 'Big Bang' and 'Steady Gait' theory) set the tone for the rest of the novel: witty, frequently painfully funny but never at the expense of its charming cast of characters. Rincewind, Twoflower, the Luggage, the iconograph imp and Death Himself - all of these characters and more contained with this one novel as well as everything else, and all of them very entertaining. I'm so glad there are at least another twenty books to go - otherwise there would be a lot of people out for Terry Pratchett's blood, me included.I really really really recommend this book. I'm not a big fantasy fan myself, but this series takes the mick out of the whole genre so you don't have to be. It's top quality entertainment.

Published by Thriftbooks.com User , 23 years ago
"The Colour of Magic" is the first, and obviously the oldest, of the now infamous "Discworld" series. More than ten years since originally published, the book is still attracting new readers - me among them - who have gone on to purchase each and every one of the series. High praise indeed? Read on...The general plot of Pratchett's novel is a romp around a fantasy world. A place where the world is flat, and people who tried to show it was round were proven wrong years ago. It's carried through the cosmos on the back of four giant elephants, the magnitude of whom is so great that simply trying to imagine it makes your head spin. Even more mind-boggling, these elephants stand atop Great A'Tuin, the star turtle, who moves with extreme deliberance over tens of thousands of years, and has thoughts so vast that time itself pales into insignificance.Our heroes? Well there's Rincewind, the dropout wizard who failed Unseen University, the Wizard's universal school in all dimensions including ours, and TwoFlower, the tourist with the living luggage (and what stroppy luggage it is too). Happening upon each other in a pub, Rincewind finds the odd fellow strangely endearing; mainly because he is paying for a pint of ale with three times the value of the pub in solid gold. Their quest leads to run-ins with goblins, the local malitia, an entire array of very scary trees, demons with a penchant for the number eight, the local barbarian (who is usually for hire) and a crackpot set of scientists determined to travel to the edge of the world, and beyond...Pratchett's writing style is both warm and intoxicating. He involves the reader from the very first page with such wild fantasy that it simply must be true! His wacky, irreverent humour is simply so fresh that I have not encountered such entertaining and strongly visual prose since Douglas Adam's and his series of books including "The Hitch Hiker Guide to the Galaxy."If you're a little mad at heart, love a new perspective on things and want to be thoroughly engaged in a genuinely fun read that you won't want to put down till it's finished (and the fact that it isn't written in chapters aids to this end) then this book is an absolute must. Thoroughly recommended!
Copyright © 2022 Thriftbooks.com Terms of Use | Privacy Policy | Do Not Sell My Personal Information | Accessibility Statement
ThriftBooks® and the ThriftBooks® logo are registered trademarks of Thrift Books Global, LLC