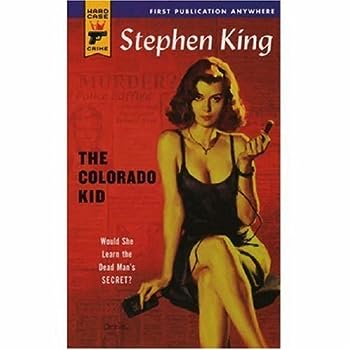 This description may be from another edition of this product. Stephen King's bestselling unsolved mystery, THE COLORADO KID -- inspiration for the TV series HAVEN -- returns to bookstores for the first time in 10 years in an all-new illustrated edition. On an...

Published by Thriftbooks.com User , 11 years ago
Now that was a mystery! A "true unexplained mystery." Usually I can't stand open ended books or books that end with a cliff hanger, but this one I loved. There is something about the way King crafts his stories, with such rich characters and details that draws you into the scene and makes you feel like you are sitting right there hearing the dialog, that I really enjoy. I found this story refreshing in that it dared to tell a story where the ends weren't tied up neatly, answering all the questions and then used that story to make a point and clarify the two types of storytelling. I am very glad I started watching the TV show Haven, which motivated me to read this story that it is based on. It clarified for me why I can't stand books that are just "accounts of unfolding events" and end with cliff hangers. I get enough of that in real life when I escape while reading fiction I want a story with a beginning, middle and end. While this story may not have had answers to what happened it did provide a lesson and feel like a complete story of the characters telling the tale and hearing it.

Published by Thriftbooks.com User , 11 years ago
This short Stephen King mystery is a who dun it, why dun it, even when dun it-- to whom. Putting the pieces together is the fun, but their are no absolute answers. You might be able to create your own Murder Mysrtery Party at home based on this. This novel is the basis for the tv show HAVEN, but the events of the book take place 20 or 25 years before the tv series.

Published by Thriftbooks.com User , 11 years ago
I enjoyed the book. I ordered it because on the TV credits, it mentioned that the new SyFy program "Haven" was based on this story. Even though there was not a close connection between the book and the show, I enjoyed the mystery. The item was in very good condition and I was able to play it as soon as it arrived.

Published by Thriftbooks.com User , 15 years ago
If you have read King recently, you will notice that he regularly lets his own voice come through, somehow reflecting on the very art of writing stories. As the most prolific writer of the last century still going strong into this one, King has likely told most of his stories. At this point I think he spends more time reflecting on how stories work and why they work and then finding stories that let him explore that question. Plato once wrote that "The unexamined life is not worth living." Paul Ricoeur has reframed this as "the unnarrated life is not worth living." Do we give ourselves over to utter postmodern lack of closure or is closure still essential to being human. If King was a philosopher he might want to take on Ricoeur's assertion. Perhaps. His two protagonists who tell the story of the dead body, that is no story because it "has no throughline," is a narrativist reflecting on the art of narrating itself. The story is an artifice. The question is what makes a story. One can read King's horror novels where characterization is flattened so that plot can resolve itself, or one can read his human interest stories in which character is the essence of rich evocation. The latter is true in The Montana Kid. This is a story about what makes a story a story and whether life itself is or is not something we can narrativize. And sly author that he is, King leaves us with Stephanie's story that is realized amidst the unresolved story of a "kid" that has no throughline. In the generations to come, when Kings novels become the subject of university courses--and they will-- the Montana Kid may well serve as King's literary equivalent to Kierkegaard's "My Point of View as an Author." What good would it be for King to write an essay on his craft of storytelling? He is not an essayist. He is a novelist. So he has written a work the allowss him to grapple with the essential question he faces as a storyteller: what is it that makes a story a story and when it comes to art, is it better to evoke character (whether in writing or in life) or narrate your own life in order to give it meaning? I had the privilege of listening to the story on tape in a 6 hour car ride--marvelously read and realized. If watching an artist question the art of narrativizing while narrativizing intrigues you, then what better writer at the outset of the 21st century can guide the question than Stephen King.

What isn't explained is more important than what is

Published by Thriftbooks.com User , 16 years ago
This is a small book and easy to read in one sitting, but it packs a big punch. What King doesn't explain is more important than what he does explain. Like his last great novel, FROM A BUICK 8, this book is about the mysteries that don't have easy answers. Some readers may not like that in their fiction, though, even though it is more like real life than most novels. In real life there isn't always a third act that explains everything. The same goes for THE COLORADO KID. Highly recommended.
Copyright © 2020 Thriftbooks.com Terms of Use | Privacy Policy | Do Not Sell My Personal Information | Accessibility Statement
ThriftBooks® and the ThriftBooks® logo are registered trademarks of Thrift Books Global, LLC