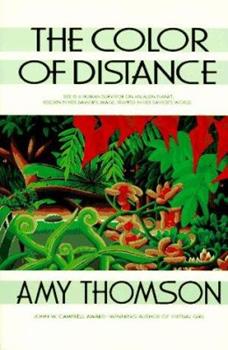 The Color of Distance

(Book #1 in the The Color of Distance Series)

Juna is the sole survivor of a team of surveyors marooned in the dense, uninhabitable Tendu rainforest. Her only hope for survival is assimilation into the amphibian Tendu species. Now she must take... This description may be from another edition of this product.

Published by Thriftbooks.com User , 20 years ago
At some point in reading this book, I found myself so engrossed in the world Amy Thomson had created I started thinking of the emotions that I was feeling in terms of colors (a way in which the alien race in this book express emotions). I was enthralled with the rich world and culture that was created by the author. I especially enjoyed the relationships between the main character and the Tendu as she begins to learn and appreciate the complex relationships that exist within the Tendu and between the Tendu and the environment. Perhaps, as others have noted, I did not feel that the Tendu were THAT alien. I don't think that this is a bad thing though. If they were entirely alien, neither the reader nor the main character could relate to them as well as we do. Would Juna (the human main character) feel as compelled to take care of a bami (a juvenile Tendu) if the bami didn't resemble a mix of a child and eager to please puppy? The part of the story which was most compelling to me was the changes that Juna has to undergo - both physically and psychologically in order to adapt to the world on which she finds herself stranded. I enjoyed seeing her transform as she "grew into" her new alien body and into her part in the web of the Tendu society.Amy Thomson weaves a spell with her use of language and imagery. And I found myself captivated by her writing as well as the world that she creates. A trully enjoyable adventure!

Published by Thriftbooks.com User , 21 years ago
This is one of the best SF books I have read in many years. Having the story told from the viewpoints of both Juna and the aliens was very different. It was fascinating to see the same things from totally different points of view, especially at the beginning before Juna realizes how intelligent the Tendu really are. I thought that the communication by colors and symbols was also very unique and well thought out. The amazing variety of the planet and the forest were very believable and the descriptions evocative - I want to go there! I highly recommend this book!

Published by Thriftbooks.com User , 22 years ago
This was the first book I've read since I read "Ender's Game" in '93, that kept me enthralled, and was literally a "I could NOT put it down" book. FUlly developed characters, a realm that was foreign, alien and very believable, a culture that was fleshed out and diverse, incredibly 3-dimensional. The setting was entirely enthralling and enveloping, I was *there* as I read. I was able to empathize with the characters, truly seeming to feel as they did. I understood their thoughts and feelings, motivations and misgivings, etc. I've already lent my copy out, and shall do so again and again..

Finally, a first contact novel that isn't an alien invasion

Published by Thriftbooks.com User , 22 years ago
Finally, someone who doesn't think that all the aliens want to destroy us and doesn't assume that they are higher-tech then us.

Highly well developed alien culture, and then some

Published by Thriftbooks.com User , 24 years ago
The author does an excellent job developing the language, culture and ecosystem of the Tendu. I also felt quite comfortable with Juna, the human character who was stranded on the planet with the Tendu. I was utterly fascinated by the linguistic precept that the Tendu use 'skin speach'. Also, the stratification of the culture by chronological development was intriguing. When a friend recommended that I read this book, I was kind of dubious by the description. I'm not really into alien encounter stuff or make-me-think about ecology stuff. That said, I bought three copies of this book. One as a gift for my brother. One to loan out to other people, and one to keep in the house for myself! This one goes to the desert island with me.
Copyright © 2022 Thriftbooks.com Terms of Use | Privacy Policy | Do Not Sell My Personal Information | Accessibility Statement
ThriftBooks® and the ThriftBooks® logo are registered trademarks of Thrift Books Global, LLC