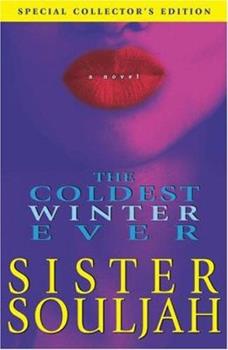 The Coldest Winter Ever

(Book #1 in the The Coldest Winter Ever Series)

In The Coldest Winter Ever, internationally known author, activist, and hip-hop artist Sister Souljah brought the streets of New York to life in a powerful and unforgettable first novel. Beautifully written, raw, and authentic, this novel firmly established Sister Souljah as the mother of all contemporary urban literature and the author of the first classic of the genre. I came busting into the world during one of New York's worst snowstorms, so my...

Haven’t read yet look to purchase

Published by Nicole , 6 months ago
For the person trying to sale this book for 130.00 whyyyy!!! are you serious

Published by Thriftbooks.com User , 4 years ago
Everyone knows that one friend who should have seen their future coming. This is that story. Winter is a very bright girl that you want to save but just doesn't seem to understand or want to understand the destruction of her own making. Very well written and equally as captivating Sister Souljah has written a novel that forces you to turn the page.
Published by Thriftbooks.com User , 5 years ago
The Coldest Winter Ever will always and forever be one of my all time favorite books! The way that it pulls you in from the very start makes you want to keep reading to see what else is in store. I love Sister Souljah and all of her books that she's written! This is a book that you will never be able to forget! Definitely a page turner!

What Goes Up Must Come Down!

Published by Thriftbooks.com User , 21 years ago
There are a few books that leave an impression months afteryou've read them and The Coldest Winter Ever is one such book. Not because TCWE was necessarily a literary masterpiece but rather because it was riveting, engrossing and must read for all. Although fictional in nature people like the Winters and the Santiagas of the world do exist. It's the story of the rise and fall of Ricky Santiago's family told from the main characters perspective. TCWE is set in Brooklyn, NY and is narrated by, Winter, so named because she was born on the coldest day ever to Ricky Santiago a drug dealer and his 14 year old wife. As one of Brooklyn's top drug lords Santiago kept his family(immediate and extended) on top and provided the best of everything for them even thought they lived in the projects. When he decided to move the family to Long Island the threads that loosely held this family together quickly began to unravel. After Winter's Dad, Santiago, is arrested and imprisoned in life for selling/trafficking drugs, Winter must face the challenges of making it on the streets of New York with no education or skills; of course she refuses to give up the lifestyle she's become accustomed to and the heinous acts that she commits along the way are unforgiving, stupid/dump, cutthroat and leave little room for compassion. Even thought she ended up being homeless she could still spend $5,000 faster than most people could spend $5.00. Winter's main concern was always about her looks and finding a man with money to take care of her in a lifestyle that she was accustomed to. Winter was raised on money, street smart principles but with no values or morals; heck even education wasn't important as long as one had good looks and money...didn't matter if it was drug money. But as much as one chooses to dislike Winter, one can't help but learn what life is like growing up as the child of a drugload. TCWE was told in a RAW and engrossing manner. Initially it appeared that Sister Souljah was glamorizing the drug scene but as the story unfolded and developed and one went deeper into the plot the RAW TRUTH came through Loud and Clear. It's a book that I recommend to parents and teenagers and anyone who wants to better understand the psychological mindset of those who live for the moment without a care in the world. END

Published by Thriftbooks.com User , 21 years ago
It's been a long time since I've read a book so captivating and one that I've finished in such a short period of time (3 nights). The book was baaad! And I mean good! Great! Excellent! There was never a dull moment. I found myself constantly picking up the book to read at every opportunity that I could. I was on the edge of my seat wondering what would happen next to Winter and hoping that eventually things would work out for her and that she would get herself together. But I guess what goes around comes back around. You do dirt, you're dealt dirt. This book definitely should be read by all (especially young girls who believe that life is all about materialistic things and getting what they want quick and easy). It is definitely a page turner and eye-opener. Unfortunately, I feel that a lot of young adults who should probably read this book and benefit from it won't. Sister Souljah, girl, you put your foot in this book. You held nothing back and told it like it is. It was raw but that was Winter. I really expected her life to turn around in a neat, tidy, little way because that's how many fiction books end. But I should have known better, that you would not take any shortcuts. I have to admit though, I wanted Midnight and Winter to get together. However, I am really looking forward to a sequel....soon I hope. Thank you.

ONTIME MESSAGE FOR GENERATIONS TO COME

Published by Thriftbooks.com User , 21 years ago
This book was loaned to me by my sister. I started reading and decided at page 18, that this book really didn't have anything to say that I wanted to read about. I was wrong. I'm glad that I took my sister's advice and read further. I am a 54 year old grandmother and have ordered 4 copies to give to my grandchilddren when they reach the age of 16. I think by then they'll be able to read the message behind the gloss of the book.Sister Souljah has a message that is both relevant and ontime not only for my generation, but for my children, grandchildren (you get the picture). This message transcends time and will endure through the ages because drugs and the fast life will always be a part of our lives. She let's the kids know that the fast lane is just that - fast and not to be traveled for longevity.If I had any kind of power, I would definitely put this in the school system as mandatory reading for our young adults who have the gleam of the fake gold in their eyes.Thank you Sister for addressing this destructive issue in the lives of our young.

Published by Thriftbooks.com User , 21 years ago
The Coldest Winter Ever by Sister Souljah is a thoroughly engrossing, simply riveting book that I am very happy to have read. It is like a tell-all story from an urban teenaged girl's point-of-view. From the drug life to the privileged life, the story takes you on a journey that you will never forget. There's so much that can be said about this book, but I'll start with the main character Winter. This girl is sooo real, so authentic that I wondered "Who is Winter? Where is she?" SHE EXISTS out there somewhere. Sister Souljah did an excellent job characterizing Winter as well as the others (Midnight, Lauren, Santiaga, etc.). The way the story was written you were allowed to know Winter's every thought, whether you agreed with those thoughts or not. Winter was defined by what happened to her and how she reacted to the things that she experienced (mother's accident, father's jailing, being forced to live among strangers, lack of money, love for money...). And the plot had many twists and turns, shockers and laughs. My favorite line is "Bounce, nigga," which is what Winter said to a 'white man'. It was hilarious. Overall, I loved the story, the writing, the character, and some of the messages conveyed in this piece of work. It is highly recommended...a book that has "FILM ME" written all through its pages.

The Coldest Winter was the best Winter

Published by Thriftbooks.com User , 21 years ago
I am not a very adiment book reader but The Coldest Winter Ever was by far the best yet to cross my eyes. Its constant excitiment left me unable to but it down for one moment. This book is about a young gril named Winter born to the top dollar world of a hustler,never knowing anything less. Untill the tables are turned and the world as she knows it is shattered, and the hustle is the only thing that can save her. Or is it? I recomened this book to all of those young ladies out there trying become apart of that hustler world. It will open your eyes and make you think twice about a world no female is truly ready for.

The Coldest Winter Ever Mentions in Our Blog

The Great American Read on PBS
Published by Beth Clark • August 03, 2018
The Great American Read is a PBS series that explores and celebrates the power of reading as the core of an ambitious digital, educational, and community outreach campaign designed to get the country reading and passionately talking about books. One hundred books, to be exact, so as promised, here are the next 20!
Read Article
Copyright © 2020 Thriftbooks.com Terms of Use | Privacy Policy | Do Not Sell My Personal Information | Accessibility Statement
ThriftBooks® and the ThriftBooks® logo are registered trademarks of Thrift Books Global, LLC