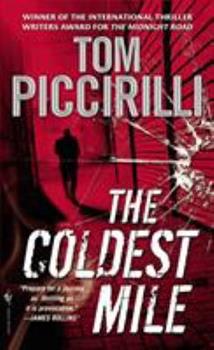 Raised to be a thief and getaway driver, Chase left the bent life after he found his true love, Lila. For ten years he walked the straight and narrow--until Lila was murdered. Now Chase is looking for his grandfather Jonah, the stone-cold-killer con man who raised him anis the last living repository of his family's darkest secrets. In returning to his criminal roots, Chase hopes to save Jonah's infant daughter from the life that Chase himself can't...

The Coldest Mile Is Fantastic

Published by Thriftbooks.com User , 12 years ago
Tom's Piccirilli's ability to craft distinctive characters is becoming legendary, and Chase, the protagonist in both Cold books, has to be one of the most intriguing and enjoyable characters Tom has created. So like an old friend who's come to call, I was delighted to see Chase once again at my doorstep. I devoured The Coldest Mile in two sittings and it was nice to see that not only is Chase back in the con business, but that he's at the top of his game. It might sound funny, but Tom has written this character so well, I actually missed the guy after I finished the first book and often wondered how the hell he was doing and what he was up to! Another thing that Tom Piccirilli is particularly adept at is lulling the reader into a comfort zone as we progress through his story. We find ourselves lost in his narrative and we willingly let him carry us along with his plotting. And it's all because we think we're smart enough to know where Tom is leading us, and maybe even, that we are one step ahead of him. The Coldest Mile is no different, so when the twists come, we are not only shocked at how the s.o.b. had managed to manipulate us, we can almost see him grinning with delight. The Coldest Mile is Tom Piccirilli at his absolute best. It has everything you'd expect from a Pic novel... con men, broads, and guns, all woven into a plot that is as exciting and as satisfying as its predecessor and almost certainly superior to any other thriller on the best seller lists today. Ttzuma

Even FASTER than The Cold Mile

Published by Thriftbooks.com User , 12 years ago
I wasn't expecting this one to move as fast as 2008's THE COLD SPOT, but it does. In fact, like our anti-hero Chases' GTO, it actually moves faster. On a mission to locate his tougher-than-nails grandfather Jonah (as well as Jonah's daughter Kylie), Chase makes his way through the brutal NJ underworld before heading down to Florida. During his trip he gets involved with a couple of different crews, manages to piss of everyone from the low man to the Main Man (and Woman), and somehow avoids the temptations of the sexy Hildy (a street girl who floats between gangs) while keeping her just close enough to find out what he needs to know. THE COLDEST MILE just didn't want to leave my hands; Piccirilli's prose is as smooth and readable as ever, his characters gritty, scary, and real, and I can't recall this many things happening in a single crime novel since Mario Puzo's grossly underrated OMERTA. With action and suspense-filled gun fights, knife fights, fist fights, scams, cons, double and triple-crosses, car chases, and, as with THE COLD SPOT, no filler, fans of this neo-noir saga can only hope there's another Chase adventure on the horizon. Don't miss this.

Anxiously awaiting the next installment!

Published by Thriftbooks.com User , 12 years ago
I have been waiting, practically in the bookstore parking lot, for The Coldest Mile ever since the final page of The Cold Spot and this book definitely does not disappoint. It is everything the previous book was and so much more. Hard guys (and girls too) with kerosene in the blood, lost loves, misguided ambitions and tragedies all along the timeline, nonstop action with pain and violence so vividly drawn you'll come away bruised and bloody the sound of breaking bones echoing in your ears, the taste of whiskey like teeth in your throat. You'll be left panting, breathless and stinking of your own sweat and cigarettes smoked down to the filters, which, naturally, you've already torn off and thrown in the street. I'm addicted and you will be too. Guaranteed.

Published by Thriftbooks.com User , 12 years ago
In THE COLD SPOT, Piccirilli gave us an authentic, funny, dark, and complex story of a young getaway driver named Chase who searched for peace and love after being raised by his cruel criminal grandfather, Jonah. But after Chase's wife was murdered, he was forced to reconnect with the brutal bent life of thieves and killers in order to find the crew who killed her and extract his revenge. THE COLDEST MILE picks up where we left off as Chase decides to score a mob family in chaos that is being pushed out of New York by other competing syndicates. He needs enough money to hunt down Jonah, who has murdered the foster family of his own two-year-old daughter. Chase refuses to allow Jonah to raise the little girl in the criminal life that he himself was raised in. Hired on a as a "driver", Chase initially thinks he's going to be a getaway man for the mob. Instead, he discovers he's to be a chauffeur. While he bides his time he comes to the attention of the family's main hitman, Bishop, and the mafia princess who lusts for Chase even while she plots to take over the family. With rapid-fire but emotionally deep chapters, THE COLDEST MILE continues on with Piccirilli's theme that unfinished business from the past will always inflict itself upon the present. He writes this with a real honesty, insight, and humanity, all of which are often too lacking in today's crime fiction. THE COLD SPOT and THE COLDEST MILE are as good as a neo-noir novels get. TCM is a fast-paced, often cynical, complex, thoughtful, and in places extremely funny story that is full of lean, mean, muscular prose. There is plenty of action but the author also takes the time to explore the dark side of family, grief, loyalty, revenge, and the potential for redemption.

Published by Thriftbooks.com User , 12 years ago
Second in Piccirilli's "Cold" series (after the Edgar-nominated THE COLD SPOT) which follows a young getaway driver and his evil career criminal grandfather as they fight the mob, the cops, other thieves, and each other. Piccirilli's writing is moody, powerful, fast-paced, and witty as hell. It's also lightning fast but features a good deal of depth. Be warned: every time you start to chuckle beware that a serious kidney punch is coming along. THE COLDEST MILE shows off exactly why Piccirilli is the poet of the underworld. This one is a lean, mean whipcord of action. It's also a poignant, involving novel that is heavy on the authenticity of criminal activity and the realism of wanting to leave it for a happy home while striving to do at least one good thing in the world. Plenty of sharp, cynical humor interspersed with gripping violence. One of the very best modern-day noir writers.
Copyright © 2020 Thriftbooks.com Terms of Use | Privacy Policy | Do Not Sell My Personal Information | Accessibility Statement
ThriftBooks® and the ThriftBooks® logo are registered trademarks of Thrift Books Global, LLC