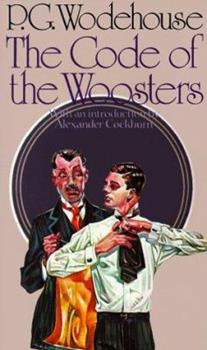 The Code of the Woosters

(Book #7 in the Jeeves Series)

P.G.Wodehouse's best-loved creation by far is the master-servant team of Bertie Wooster, the likable nitwit, and Jeeves, his effortlessly superior valet and protector. This unlikely duo is as famous as Holmes and Watson, Don Quixote and Sancho Panza, and Tracy and Hepburn, but they have their own very special inimitable charm. According to Walter Clemons, Newsweek, "They are at their best in The Code of the Woosters," in which Bertie is rescued from...

Published by Thriftbooks.com User , 16 years ago
As with any novel about Jeeves and Wooster, I don't want to give too much away. Much of the humor is not just in the language but in how surprisingly complex things can get before they are resolved. So my first suggestion is to skip the introduction by Alexander Cockburn who quotes some of the funnier scenes in the book. Now as for the story it involves a cow-creamer, a small leather book, two marriages, a want-to-be Dictator and a police helmet. The Code of the Woosters has 222 pages of some of the best dry British humor ever to come from P.G. Wodehouse's pen. As always the dialogue between Bertie Wooster and his man Jeeves is some of the greatest you will ever encounter in your whole life. How one book can contain so much is beyond me but this is, as any of his books are, a must for any library.

This, as Bertram Wooster might say, is the right stuff!

Published by Thriftbooks.com User , 17 years ago
An early critic of P.G. Wodehouse complained that his second book was identical to his first, only the character names had changed. In response, Wodehouse resolved to continue writing identical stories, but to keep his character names the same. And so, The Code of the Woosters is nearly identical to all other Jeeves and Wooster novels; Bertie gets into a sticky situation, inadvertently makes things worse, and is ultimately rescued by Jeeves. Could any one of them possibly be any good if they are all so unoriginal? Yes. In fact, they are all excellent. How? Wodehouse was a genius; reading any one of his books will prove it to you. His characters are unforgettable. His narrative is brilliant. Above all, his books are hilarious, and The Code of the Woosters is one of his finest. Betram (Bertie) Wooster, a lazy, bumbling (but well meaning!) gentleman living in Britain during the early 1900's, is pressured by his aunt Dahlia to steal a cow-shaped milk creamer from Sir Watkyn Bassett, a magistrate who once fined Bertie five `quid' for `pinching' a policeman's helmet. The task is made complicated by the presence of Roderick Spode, the amateur dictator who founded `the black shorts' and who is a friend of Sir Watkyn; Spode is watching Bertie like a hawk and threatens to break his neck if he sees Bertie so much as glance at the cow-creamer. Things go downhill when Gussie Fink-Nottle (a newt fancying friend of Bertie's) suffers a snag with his engagement to Madeline Basset (a dreamy girl who holds opinions like `the stars are God's daisy chain,' and who thinks that Bertie is madly in love with her). Bertie rushes to patch things up between them, but nearly becomes engaged to Madeline himself. In the end, only Jeeves, Bertie's brilliant, (almost) all-knowing manservant, can guide Bertie out of these troubled waters. If you aren't familiar with P.G. Wodehouse's dynamic duo, you owe it to yourself to read this book. I guarantee you won't be able to stop laughing. Nearly every line is comical. The narration itself (the story is told by Bertie) is positively hilarious. And so, I give The Code of the Woosters the highest marks I can!

The funniest series in the world.

Published by Thriftbooks.com User , 17 years ago
Believe it or not, I am 74 years old and had never read about the trials and tribulations Jeeves put up with Bertie Wooster. I have never laughed so much in my life. I am now going to get my hands on every word P.G. Wodehouse ever wrote. I truly would have loved to meet the man.

Published by Thriftbooks.com User , 20 years ago
Previous: Right Ho, JeevesThis was my first excursion into the Wonderful World of Wodehouse, and remains my favorite (though others are in close contention). The plot is simply brilliant, tightly woven together with twists and turns and ingenious irony, and flows directly from the story in Right Ho, Jeeves. Between silver cow-creamers, little leather notebooks, ferocious dogs named Bartholomew, police constables and their helmets, angry neo-Nazis with buried secrets, and the looming threat of the soppy Madeline Bassett, laugh-out-loud comedy is inevitable. Funnier still is the fact that once Bertie arrives at the dreaded Totleigh Towers, all the action takes place in one day and night, making this the most fast-paced of the Jeeves books. This is one instance in which Bertie is never to blame for the soup in which he finds himself-it is thrust upon him by others, either by cajoling or blackmail, and Bertie's ever-good-hearted nature is taken advantage of to full extent. It is Jeeves to the rescue once again. The ending will leave you smiling-and finally able to take a deep breath and relax!Next: Joy in the Morning (Jeeves in the Morning)

Guaranteed to make you laugh till your sides hurt!

Published by Thriftbooks.com User , 23 years ago
This book by P.G.Wodehouse is one of the best books ever.This is one book where Jeeves (coupled with Aunt Dahlia) are at their very best.It's about a very strange situash (as Bertie would put it) wherin Bertie has to steal an old 18th Century Cow Creamer for his Uncle Tom wanted, failing which his Aunt Dahlia would no longer permit him to taste the cooking of her master chef Anatole again. And, if this isn't bad enough, Bertie's freinds, Gussie Fink-Nottle and the Rev. Henry 'Stinker' Pinker make it worse. And, worst part of it all is old Pop Basset, his buddy and future Dictator of England, Roderick Spode as also Pop Basset's daughter, Madeline and her cousin Stiffy Byng. This book is best read with a dictionary and it is strictly recommended that you avoid the foreign phrases
Trustpilot
Copyright © 2022 Thriftbooks.com Terms of Use | Privacy Policy | Do Not Sell My Personal Information | Cookie Preferences | Accessibility Statement
ThriftBooks® and the ThriftBooks® logo are registered trademarks of Thrift Books Global, LLC