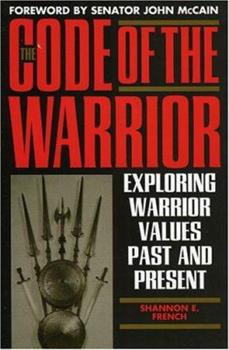 The Code of the Warrior: Exploring Warrior Values Past and Present

Warrior cultures throughout history have developed unique codes that restrict their behavior and set them apart from the rest of society. But what possible reason could a warrior have for accepting such restraints? Why should those whose profession can force them into hellish kill-or-be-killed conditions care about such lofty concepts as honor, courage, nobility, duty, and sacrifice? And why should it matter so much to the warriors themselves that...

A Good Background for Warrior Ideals

Published by Thriftbooks.com User , 12 years ago
I found The Code of the Warrior to be a good background summary of some of the origins of the warrior ideals that have been accepted and followed by true warriors over the centuries. Ms. French does a good job at summarizing several warrior cultures, giving history and vital background information which help the reader understand the origins of the different warrior characteristics. This is not a "Pollyanna" look at the traits of the warrior. This book does not simply glorify specific warrior cultures as so many others do. Instead, Ms French delves into both the positives and negatives of each of the eight different cultures that she chose to include in her book. This is done in a very straight-forward and balanced way, as you would expect from an educator. Personally, I found this book very well written and extremely interesting. The author recommends, and I concur, that the person who has a goal of living life as a true warrior, take what is good from each of these warrior "codes" and leave what is no longer useful for the warrior of today. All of the warrior cultures from the past had both good traits and some which are less than useful for the modern warrior. This book presents both so that you can determine what to accept as part of your personal code and what you would probably be better off leaving to the cultures in question. Besides the discussions of individual warrior cultures, the author also provides the reader with a good bit of history about each of these cultures, which I also found very interesting. The one area that I wished that the author would have included was an overall summary/combination of the traits from each of these cultures that should make up the code of the warrior for the true warrior of today. It would have been nice if she had taken the best of each of these societies and combined them into a simple summary of traits that should be part of the code of the warrior today, but instead she leaves that up to the reader to decide. This is probably best because, in the end, the code of the true warrior is something that he or she needs to decide on and be dedicated to from a deeply personal dedication. The bottom line is that I highly recommend this book. I really enjoyed it and found it both thought provoking and entertaining. 5 Stars! Bohdi Sanders, author of the award winning book, Warrior Wisdom: Ageless Wisdom for the Modern Warrior

Published by Thriftbooks.com User , 13 years ago
I picked this book up on a whim after I read an article by Dr. French about a leadership exercise she did with her students at the Naval War College. The introduction was a real eye opener. I had no idea about the importance and integrity of military codes. I also saw how these ideals apply to other professions. The real strength of her work is the in depth scholarship which is accessible. I teach in a professional school and I have a doctorate degree, but I find much scholarship is poorly written and intensely boring. This book is neither. It is informative and relevent.

Lessons lost in our benighted age

Published by Thriftbooks.com User , 15 years ago
Professor French has produced a fascinating compilition of the heroic ideals of some of the world's greatest warrior classes. Some examples, the Medieval Knight and the code of Chivalry, the Samurai and their philosophy of Bushido, the Viking and the role of Heroic Honor in the Nordic lands. You will also find the monks of the Shaolin Temple in here, and the Native American plains tribes (An entire book would be needed to cover the heroic ideals of all the indigenous American cultures!). The reason this book is so significant, is that the concept of Honor is virtually dead in our vapid, passive-aggressive, superficial "modern" society. Its a society dominated by hedonism, narcissism, and conformity. A society that has lost its sense of being and purpose, lost in the vast sewer of so-called "popular-culture". In ages past, warriors formed martial fellowships adhering to a code of just and honorable conduct, so as to defend their people and way of life. It was often the struggle of their clan, tribe, or nation, against alien aggressors who would otherwise anhilate them, aggressors who might even be willing to go to any extreme to accomplish that end. Of course, in reading history, there are just as numerous examples of warriors who belonged to these institutions, whose actions and behavior was contrary to that code which they alledgedly stood for...but they don't really count. Every institution has its renegades and generally wayward members. The important factor, is that the majority did adhere to these codes, as well as they could, and the righteous nature of honorable conduct justifies itself. Those who lack a code of Honor often commit all manner of atrocities without remorse. A code of Honor, then, often serves as a guide to civilized behavior, a guide to limit or prohibit needless destruction in a conflict. In our present age of mindless psycho-babble and "cultural-relativism" which lamely attempts to justify criminality, dependance, and ever-diminishing morality, we need a reminder of a higher philosophy of living, a concept of individuality, self-sufficiency, discipline, and self-respect. A previous reviewer, an obvious leftist, will naturally hate this book, as the concept of Honor conflicts with their perverse "alternative lifestyles"...their "if it feels good-do it" existance. The very concept is "childish?", in their point of view. As usual, some people just don't get the point. The warrior-quest is more vital now, to the human soul, than at any previous time in history.

Published by Thriftbooks.com User , 17 years ago
This book literally blew me away. One of the most inspiring things I have ever read. By analyzing warrior cultures throughout history, The Code of the Warrior is an invaluable tool to teach people today what having a warrior code, or a virtuous code of ethics, is all about. You will walk away with a better understanding of the virtues of courage, integrity, loyalty, love, duty, honor and many others. And you will be inspired to develop your character to fight for what is honorable and true. An essential book for today's lethargic culture. If you want to develop your warrior potential and be a force in this culture for good, read this book!!
Trustpilot
Copyright © 2022 Thriftbooks.com Terms of Use | Privacy Policy | Do Not Sell My Personal Information | Accessibility Statement
ThriftBooks® and the ThriftBooks® logo are registered trademarks of Thrift Books Global, LLC