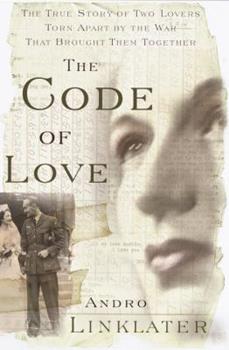 The Code of Love

An astonishing true tale of secrets, love, and war. Pamela Kirrage, beautiful and impulsive, met and fell in love with the dashing RAF pilot Donald Hill just months before Hill was shipped off to the Far East to protect the British colonies against Japanese aggression. They exchanged rings the day before he left, a promise to marry as soon as he returned. Little did they know that five years would pass before they saw each other again. The Code of...

Published by Thriftbooks.com User , 20 years ago
This is simply the best book I have read in a long time. Andro Linklater writes clearly and eloquently about the love affair between Pamela Kirrage and Donald Hill at the eve of World War II. He brings to life the great excitement of their budding romance and the long, difficult years they spent apart, Pamela doing her part to support England's war efforts at home and Donald languishing in a Japanese concentration camp. The atrocities that Donald experienced are described in a matter of fact manner that does not take away from the sheer horror of what he must have endured. He was determined to document what happened in the camp at the risk of his own life and eventually coded his diary to ensure that it would not be discovered. Through it all, his promise to return to Pamela gave him the will to survive. Years later after Donald's death, Pamela resolved to know the contents of his diary so she could understand what had happened to him, what had happened to them. I found the efforts to decode his diary just as fascinating as the turbulent relationship between Pamela and Donald. This is an intelligent and articulate account of two passionate people caught up in the throes of war and their struggle to regain their lives and relationship once reunited. It is a romance, a war history, and a mystery all rolled into one.I am recommending it to everyone I know. Read it!

Published by Thriftbooks.com User , 20 years ago
Pamela Kirrage and Donald Hill were very much in love and living in England right before the outbreak of World War II. Donald was sent overseas and spent three and a half years in a Japanese prison camp. He was never the same after the war, but tried to live a normal life with Pamela and their children. David kept a diary during his imprisonment, but no one could crack the code until years after Donald's death, when Pamela found a mathematician who solved the mystery. This book tells Donald and Pamela's sad, but moving story of true love, the horrors of war and the ultimate triumph of the human spirit.
Copyright © 2020 Thriftbooks.com Terms of Use | Privacy Policy | Do Not Sell My Personal Information | Accessibility Statement
ThriftBooks® and the ThriftBooks® logo are registered trademarks of Thrift Books Global, LLC