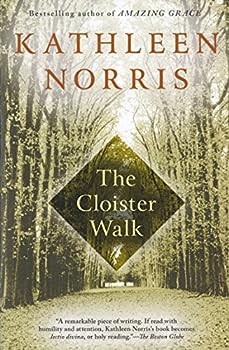 This description may be from another edition of this product. A NEW YORK TIMES BESTSELLER AND NEW YORK TIMES NOTABLE BOOK OF THE YEAR "Vivid, compelling... An embrace of moral and spiritual contemplation." -The New York Times "A remarkable piece of writing. If...

Published by Thriftbooks.com User , 18 years ago
Kathleen Norris' magnum opus, The Cloister Walk, has provided the entrance into monastic spirituality for almost as many people as any work in history, assuming, of course, that the people who purchased her book read, mark, and inward digest the meanings contained therein.It is a truly remarkable achievement--one born of contradiction and ambiguity. A woman has found such spirituality and insight in communities predominantly organised and lived in by men (I wonder how different or similar this work would be had Norris concentrated on visiting convents?). A protestant has found a home in her own soul for many of the most 'catholic' of practices. Where these insights and practices lead are different at different times, ever changing yet ever constant.Norris structures her book (and structure is very important for monastic types) in a similar fashion to a monastic day and year. She follows a liturgical calendar, and fills in the gaps with reflections and stories of experiences.She uses the daily cycle to great effect--for instance, on April 2, the day of Mary of Egypt, Norris incorporates the story of Mary into her narrative in much the same way that monastics incorporate such stories into their practice and contemplation: 'Monks have always told the story of Mary of Egypt to remind themselves not to grow complacent in their monastic observances, mistaking them for the salvation that comes from God alone. ... Repentance is coming to our senses, seeing, suddenly, what we've done that we might not have done, or recognising, as Oscar Wilde says in his great religious meditation "De Profundis", that the problem is not in what we do but in what we become.'Norris reflects on the difficulties she encountered on her journey, with the monasteries, with her family, with her career, with those who just couldn't understand what it was she was trying to accomplish or find. Much like anyone who tries to discern and follow a call to vocation in life, there are joys great and small, and difficulties great and small, fulfillments and doubts, and lots of reflection. She is frank about her struggles to believe, and finds solace in the doubts of others. 'I believe that Teresa became a uniquely valuable twentieth-century saint, a woman who can accept even the torment of doubt, as she lay dying, as a precious gift, who turns despair into a fervent prayer for others. I think of her as a saint for unbelievers in an age of unbelief, a voice of compassion in an age of beliefs turned rigid, defensive, violent.'Norris reflects on hospitality, prayer, study, work, community, solitude, silence and music. 'Music is serious theology. Hildegard of Bingen took it so seriously as a gift God made to humanity that in one of her plays, while the soul and all the Virtues sing, the devil alone has a speaking part. The gift of song has been denied him.'There is a true spirit at work in this book, that reaches out in many different ways to people of all backgrounds. This is true of monast

Published by Thriftbooks.com User , 18 years ago
For many people, Kathleen Norris' story is somewhat familiar. She was raised in a faith tradition as a child, abandoned her faith, or at least put her faith on hold, then rediscovers her faith as an adult. Norris' experience is hardly typical, but it is definitely not "the same old story" with a different person telling it. Norris rediscovers faith accidentally, but it is not the Protestant faith of her youth. She is now a Protestant whose faith is colored by Roman Catholicism, particularly the Benedictine monastic tradition in Catholicism.Norris is a writer whose primary genre has been poetry. In 1991, she spent a year at a Benedictine monastery in Minnesota and entered into the life of this monastic community. From time to time she also traveled to her home and to various parts of the country for conferences or speaking engagements. The book is taken from reflections of that experience. In the book, she is connected to her life outside the monastery while at the monastery and while away from the monastery, she still seems to be very present to the life of the monastery. The life in the monastery has a certain pattern to it, based on the Rule of St. Benedict. The year follows a calendar, but it is the calendar of the Roman Martyrology which lists the days that various saints and religious feasts are remembered. The Liturgy of the Hours, chanted by the monks is essential to the life of the monastery as is time for personal prayer and reflection. As both an insider (as a person connected to the monastery) and an outsider (a Protestant woman in an all male Catholic community), Norris is able to make keen insights into the life of the monastery with a unique perspective.This is a book that should be read from cover to cover when the book is read for the first time. Since the book begins in September and concludes in August of the following year, reading the whole book rather than excerpts is essential to see Norris' growth in her understanding of monastic life as well as her own spiritual growth. After reading the book a first time, most readers will inevitably go back to favorite passages. I often reread portions in the book about the liturgical seasons such as Advent and Easter. I also enjoy rereading her understanding of "lectio divina" a prayerful method of reading scripture that allows the words to speak to a person's heart. I believe that as a poet, she is able to understand the richness of scripture both from a literary point of view and as a believer. Her experiences back home in South Dakota and her activities in her own faith community are also great excerpts in the book.Part of my love for the books is due to the fact it can be read and shared with so many people. More often than not, religious books speak only to a person who shares the same religious mindset. I have found myself recommending the book to lifelong Catholics as an affirmation of the faith. I love the fact that this Protestant woman has a better understanding and apprecia

Started my own personal walk...

Published by Thriftbooks.com User , 19 years ago
It would be difficult for me to say a harsh thing about this book or the companion audio tapes read by Debra Winger. I was in a very confused and troublesome place in my like and this book introduced me to the wonderful simplicity and sense of the Rule of St Benedict, and gave me my first recognized touch of Grace. I enjoy Norris' writing style. She is quirky, down to earth. Unlike other reviewers, I like her familiarness, her occasional slang and language choices. She is a real person reporting a real experience, and that experience literally penetrated deep within me. What more could anyone ask for in a book?

Published by Thriftbooks.com User , 20 years ago
Even most christians today seem to find the idea of the monastery archaic, extreme and unappealing. Here, Ms Norris, a hesitant believer, makes the convent seem appealing, beautiful and full of wisdom. Once you get past the gimmick - a modern poet finding centering in a monastery - there is still much to like about this book. It is a combination of a lot of things - a painfully personal journal, a catalog of discoveries and musings, a polished essay on laundry that was published in the New Yorker, and several brilliant pieces that stand as academic writing, ready for a feminist publication or academic journal. I think the latter were my favorite. It is informative and enjoyable to find Ms. Norris taking on the virgin martyrs, looking at catholic history and practice with a modern feminist eye, and finding much to like, and much to weep over. Another similar essay comparing the role of biblical prophets and modern day poets (both dwellers on the "margin" of society, yet deeply necessary to that society) is also excellent.Norris' respect for the Word is wonderful, as well. She writes much and often about the poetry of the Bible - psalms, Jeremiah - and how they fit and fill her life. She brings new life to what, for many of us, have been wrongly dead words. Her reflections on the monastery are good. She gives monks and nuns an earthy reality, talking about their quirks, their sense of humor, their doubts and struggles as well as their achievements, discipline, and success. She spends a fair amount of time digging into the heritage and history of monasticism and christianity - apparently she is reading Christian classics as she is living at the monastery - and I learned much about ancient monks, martyrs, and saints. There is much wisdom in this book, and I appreciate Kathleen Norris' awareness and poet's sensibility. It reveals a richness in the Christian tradition that I gladly and happily claim as a follower of Jesus. It's not all WWJD bracelets and "Left Behind" novels. A passage: "Not long ago I accompanied a Trappist abbot as he unlocked a door to the cloister and led me down a long corridor into a stone-walled room, the chapter house of the monastery, where some twenty monks were waiting for me to give a reading. Poetry does lead a person into some strange places. This wonderfully silent, hidden-away place was not as alien to me as it might have been, however as I'd been living on the grounds of a Benedictine monastery for most of the last three years. Trappists are more silent than the Benedictines, far less likely to have works that draws them into the world outside the monastery. But the cumulative effect of the Liturgy of the Hours - at a bare minimum, morning, noon, and evening prayer, as well as the Eucharist - on one's psyche, the sense it gives a person of being immersed in the language of scripture, is much the same in any monastery. What has surprised me, in my time among monastic people, is how much their liturgy

Published by Thriftbooks.com User , 21 years ago
I first read Cloister Walk after deciding to write my senior thesis on her writings. I was intrigued by a writer who was a feminist, embraced Christianity, explored monasteries, and found an audience outside the conservative Christian market. As a person who has grown up with a strong faith in God and love for Jesus, I also longed for new ways to talk about God. Norris's honesty and exploration of what it's like to live out the beliefs and ideas of the Christian faith gave me confidence to explore my own experiences of these beliefs. Her chapter on the Psalms was particularly amazing. I felt like I was being set free with Norris to be honest with God and others about being human--complete with anger, doubt, and depression. Her theology, or speech about God, is grounded in everyday living. She finds God revealed in the simplest things, which is consistent with the Bible and the character of God--who chose to become a human in Jesus. This affirms for me that even the smallest things I do everyday are important to God--because he loves me enough to become someone like me.
Copyright © 2020 Thriftbooks.com Terms of Use | Privacy Policy | Do Not Sell My Personal Information | Accessibility Statement
ThriftBooks® and the ThriftBooks® logo are registered trademarks of Thrift Books Global, LLC