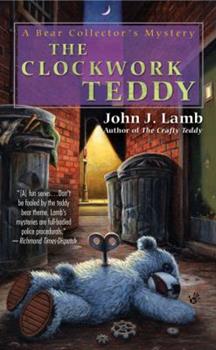 (Book #4 in the A Bear Collector's Mystery Series)

When Brad and Ashleigh Lyon re-visit San Francisco, a cutting-edge robot teddy bear is found at a murder scene. Now the bear-making couple must try their crafty hands at fur-ensics.

Great fun for anyone who loves mysteries and teddy bears

Published by Thriftbooks.com User , 13 years ago
Or just off-beat, fun mysteries for that matter. I used to love a particular brown teddy bear, gone these 50 years or more, but this pleasant little romp brings back some of the joy that bear gave me when I was young. The other reviewers have done a great job describing the plot and the pleasures here; I thought I might add a bit about the setting for part of the mystery, the Susan Quinlan Doll & Teddy Bear Museum & Library. The museum is located in Santa Barbara and contains over 3,000 art dolls and teddy bears, primarily created by California artists. The library contains the "largest known collection of books on the topics of dolls, dollhouses, and teddy bears, containing nearly 10,000 volumes. The Research Library also features a large collection of periodicals on these subjects as well as books on related topics such as toys, puppets and costumes." 500 Handmade Dolls: Modern Explorations of the Human Form is a great introduction to modern handcrafted dolls. For anyone who already loves the wonderful art dolls and teddy bears that talented artists all over the world are creating, this mystery would make an exciting addition to their collection. Robert C. Ross 2009

Published by Thriftbooks.com User , 13 years ago
If you love teddy bears and you love detective stories, this series will enthrall you. I can't wait for the next one.

Published by Thriftbooks.com User , 13 years ago
I loved this book and the others in this series. I wish he could write faster.

I was laughing out loud--no blood, guts, etc, either

Published by Thriftbooks.com User , 13 years ago
I was reading "Clockwork Teddy" under a streetlight on a freezing night and was cackling out loud--it's that good! There's no blood, guts, sex, graphic or excessive violence, or excessive cussing, yet it's an awful lot of fun. I HIGHLY recommend John's teddy bear books; in fact, I'm starting my mom on them with large print for Christmas. She's a picky reader; she likes Sue Grafton but not Janet Evanovich, for instance. I think she'll like John's books just fine!! As for me, I don't like too much suspense nor blood & guts; there's enough of all that in real life. Try them; I think you'll like them!

Published by Thriftbooks.com User , 13 years ago
Brad and Ashleigh are combining business with pleasure. Brad has had to return to San Francisco to testify in a case from his days on the force, but they've managed to schedule it to coincide with the annual teddy bear festival in Sonoma. As the festival is opening, Brad witnesses someone dressed in a bear costume rob fellow teddy bear artisan Lauren Vandenbosch. That night, Brad and Ashleigh are catching up with his old partner over dinner when a call comes in for a homicide in San Francisco. Brad decides to tag along and stumbles on a robotic teddy bear at the scene. Even more puzzling, he begins to suspect that the murder is connected to the robbery from Sonoma that morning. Can he figure out what is happening? This is the fourth book in the series, and I loved it just as much as the others. Part of the charm is Brad and Ashleigh. They're the kind of people you'd love to spend time with in real life. We get to meet their daughter Heather this time around, and I loved her instantly. The location allows Brad to deal with some of the issues from his last days on the force, and I felt he grew as a result. I did figure out one of the major twists of the plot before we got there, but there was still so much else going on that I had a hard time putting the book down. And once Brad figured out what I knew, it was a race to wrap things up that I couldn't put down for a second. Despite the teddy bear theme, these books aren't overly cute. But they aren't gritty life on the street books either. The author manages to find a nice balance between the two. I'm so glad I gave this series a chance. The time between entries is always too long. If you want a fun, new series, start this one today.
Trustpilot
Copyright © 2022 Thriftbooks.com Terms of Use | Privacy Policy | Do Not Sell or Share My Personal Information | Accessibility Statement
ThriftBooks® and the ThriftBooks® logo are registered trademarks of Thrift Books Global, LLC