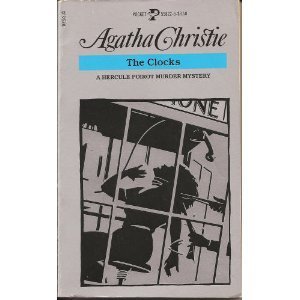 (Book #37 in the Hercule Poirot Series)

Published by Thriftbooks.com User , 13 years ago
Published in 1963, "The Clocks" is a great example of Christie's ability to morph a myriad of her previous ideas into a nicely-written single mystery. Here, we have murder, international intrigue and, most of all, an aging Hercule Poirot at his best. A man is murdered, apparently dumped in a house where a blind lady lives and other unfortunate, seemingly innocent people, are dragged into the mess. The identity of this well-dressed murdered man remains a mystery until Hercule Poirot is invited to discover his identity and thus solve the crime from his armchair. A sub-plot involves the unveiling and arrest of a dangerous subversive international criminal and Poirot allows his secret agent friend, Colin Lamb, to handle this one on his own. But the crimes seem to be linked and that has Lamb worried as he appears to aid his friend, Inspector Hardcastle, in following up on the murder.... which turns into TWO murders. Poirot shows up late in this one, (a previously-observed Christie idiosyncracy), and, in fact, it is Colin Lamb who appears as the principal protagonist, a fact that might make Poirot devotees a bit edgy. But we have to remember that Poirot is getting along in years and we can't have him running about interviewing suspects as he did in the early '20s (publication date) in "The Mysterious Affair at Styles," (actually, he was "retired" by that time and Hastings even observed that he "limped a little" way back then, while WWI was ongoing!) So, one can expect a matured Christie writing here, and very well-done too!

Published by Thriftbooks.com User , 13 years ago
I am convinced that in "The Clocks" Agatha Christie is writing for the fun of it and inviting her readers to come along and enjoy the fun. The key is in the scenes where Hercule Poirot is discussing detective fiction and points out traits and weaknesses of various detective story writers (some real, some imaginary, and Ariadne Oliver who represents Agatha Christie herself). So many of the factors mentioned (bizarre circumstances, overreliance on coincidence, etc) are exactly the characteristics of "The Clocks". "The Clocks" does not rate among the greatest of Miss Christie's books. However, it is a satisfying story and lots of fun.

Published by Thriftbooks.com User , 17 years ago
The first time I read this novel, I had to reread it again. Why? So many questions still linger at the end of the story even though the pages has ended. I wondered and reread and after the third reading, I finally got it all.The Clocks is a story that has two main plots, and the one has absolutely nothing to do with the other. But they were connected in a way when a young typist finds a dead body in a livingroom of a blind woman. From there it's red herring all the way. But bits of real clues emerge when Mr Lamb (a fake name) talks to a girl with a broken leg. Poirot only comes in now and then but became more interested when another murder occurs, while Lamb becomes Poirot's legs, ears and eyes. Oh yes, there are clues aplenty, but a broken high heel has never been this important as a clue.Christie delivers this story with delightful take that neither too wordy nor too lengthy. This is another often neglected classic Christie, so get it.

Poirot again is called out of retirement

Published by Thriftbooks.com User , 17 years ago
This 1963 mystery begins with a young woman going out on an assignment from a secretarial service and finding a dead body instead of a client waiting to dictate a letter. Understandably upset, she runs out into the street screaming. There she meets a young man, Colin Lamb, who tries to help her. Mr. Lamb (not his real name) is the son of Sgt. Battle and may not be the innocent marine biologist that he claims to be. In fact there may be many things in that neighborhood that are not just as they appear to be. Colin investigates on his own for a while but ultimately turns to Hercule Poirot for help. The story is well plotted. Some aspects might confuse a 21st century reader, like the scarcity of home telephones in English houses 50 years ago, the tensions that existed between Russia and the rest of Europe and the difficulities of identifying a dead body during that time. Even with these problems the story is very well written and still quite enjoyable.

Published by Thriftbooks.com User , 21 years ago
this is a great book! throughout the book, i had a one-track mind and could not get myself thinking about anything else than what the title says "the clocks". christie amazes you at the end with a whole explanation by poirot and you are left speechless. sometimes confusing with all the different people's names that she throws at you but still a wonderful mystery!
Copyright © 2020 Thriftbooks.com Terms of Use | Privacy Policy | Do Not Sell My Personal Information | Accessibility Statement
ThriftBooks® and the ThriftBooks® logo are registered trademarks of Thrift Books Global, LLC