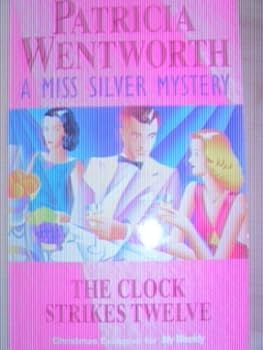 (Book #7 in the Miss Silver Series)

This description may be from another edition of this product. This is another Miss Silver mystery. Patricia Wentworth was originally a writer of historical romances and won a prize for her first novel. She then turned to mystery stories and has written some 30...

Miss Silver at her best

Published by Thriftbooks.com User , 17 years ago
It's time for old scores to be settled and conflicts to be resolved. Mr. James Paradine has laid down the gauntlet to his family and someone has killed him. With two love stories (Elliot Wray and Phillida and Mark and Lydia) and everyone there suspect, Miss Silver unravels the mess and the answer is the twist that Wentworth loves to give us. This is one of my favorites.

Published by Thriftbooks.com User , 19 years ago
On New Year's Eve, 1942, James Paradine has just discovered the theft of some important blueprints from his office. Calling in Elliot Wray - not only his junior in the firm, but the estranged husband of his adopted niece Phyllida - James orders him to come to dinner that evening. This New Year will ring in not only with espionage, but a confrontation between Elliot, Phyllida, and Phyllida's guardian, James' sister Grace, who runs James' household - as good a recipe for disaster as one could hope for in a month of Sundays.So why is James acting like the cat who got the canary?James certainly seems to be taking a malicious pleasure in *something*, but the stolen plans aren't anything to laugh about - and when he makes a formal toast to the family party over dinner, speaking of family loyalty and inviting an unnamed party to confess to something, he really puts a cat among the pigeons: Albert Pearson, distant cousin, perfect secretary, and young to be such a crashing bore; James' solid nephew Frank Ambrose; Frank's wife Irene, fretting herself into premature middle-age over her children (and being helped along by Grace); Frank's bossy sister Brenda, who feels put upon about sharing the running of his house; Irene's flamboyant, cheerful sister Lydia, who takes Irene as a awful warning, and provides a leavening of sense in the Grace-admiration society; cousin Dick Paradine, continually working on getting Lydia to the altar; and Mike, who's hopelessly in love with Lydia, and would rather be in China than at the family dinner. Last, but not least, Phyllida Wray, who left Elliot Wray a year ago only to fall back into the smothering clutches of Grace Paradine.All in all, not a good group to taunt with an ambiguous accusation and an urge to confession - who knows what might come out. Half the family appears to have visited his study at some point in the evening, and apparently James got more than he bargained for; he's found dead, fallen from the terrace outside his study. Mike, as his heir, falls immediately under suspicion. But Maud Silver, governess-turned-PI, is spending Christmas with her favourite niece nearby - and of all people, the flamboyant Lydia turns out to have met her, and calls her in to tell the truth and shame the devil - no matter what devil turns out to have been the murderer.

Published by Thriftbooks.com User , 21 years ago
The book was really good. The ending is different than what you would expect.
Copyright © 2020 Thriftbooks.com Terms of Use | Privacy Policy | Do Not Sell My Personal Information | Accessibility Statement
ThriftBooks® and the ThriftBooks® logo are registered trademarks of Thrift Books Global, LLC