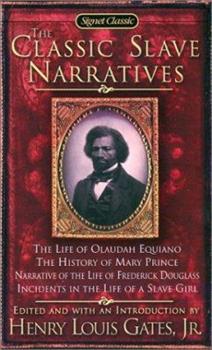 No group of slaves anywhere, in any era, has left such prolific testimony to the horror of bondage as African-American slaves. Here are four of the most notable narratives: The Life of Olaudah Equiano; The History of Mary Prince; Narrative of the Life of Frederick Douglass; and Incidents in the Life of Slave Girl .

Published by Thriftbooks.com User , 14 years ago
Henry Louis Gates provides readers with an important contribution to the many first-hand accounts of enslavement. His scintillating introduction ties together the life and times of four African Americans who narrated their own story of slavery: Olaudah Equiano, Mary Prince, Frederick Douglass, and Harriet Jacobs. The diversity chosen by Gates allows readers to gain a comprehensive perspective of the horrors of slavery: women/men, South/North, born in African/born in America. Readers desiring additional first-hand accounts are encouraged to consider compilations by Yetman of the slave interviews. Reviewer: Bob Kellemen, Ph.D. is the author of Beyond the Suffering: Embracing the Legacy of African American Soul Care and Spiritual Direction , Spiritual Friends: A Methodology of Soul Care And Spiritual Direction, and Soul Physicians.

A quartet of remarkable human testaments

Published by Thriftbooks.com User , 20 years ago
The practice of enslavement in the Americas is a phenomenon of staggering proportions. It is also one of the most thoroughly documented systems of human rights abuse in history. "The Classic Slave Narratives" brings together four powerful testaments of individuals who survived enslavement in the Americas. The book also contains an insightful introduction by scholar Henry Louis Gates, Jr.As Gates notes in the introduction, it has been estimated that more than 6,000 ex-slaves left some form of written testament between 1703 and 1944--an amazing body of literature. "The Classic Slave Narratives" is thus just a tiny part of a vast genre. Specifically, this anthology contains "the Interesting Narrative of the Life of Olaudah Equiano," "The History of Mary Prince," "Narrative of the Life of Frederick Douglass," and Harriet Jacobs' "Incidents in the Life of a Slave Girl."Each of the four powerful texts offers an effective complement to the others in the collection. In other words, each narrative illuminates at least one unique and important aspect of the American slave experience. Olaudah Equiano, for example, tells what it was like for a native African to be enslaved and transported across the Atlantic in a slave ship. Prince illuminates the life of a slave woman on the Caribbean islands. Douglass, born to a slave mother and a white father, describes in detail his quest for literacy. And Jacobs offers an incisive window into the sexual pathology of the slaveowning society.These four texts are both valuable historical documents and fascinating works of literature. Much American literature--autobiography, poetry, novels, essays, and other genres--demonstrates the influence of, or parallels to, these pivotal texts. "The Classic Slave Narratives" is a necessary text for those interested in United States and Caribbean history, in American literature, in literacy, or in human rights.

A great book that has provides a timeline of slavery.

Published by Thriftbooks.com User , 22 years ago
This book contains first hand accounts acounts of slaves during there life in Africa and how it felt to be stuffed into a slave ship and go across the see for days and days to escape slaves to slavery as it was right before the Civil War.

essential reading for every one living in the U.S. today

Published by Thriftbooks.com User , 22 years ago
These are stories of courage against great odds, first-hand accounts of an incredible institutionalized holocaust that was standard operating procedure in this country for hundreds of years. Some of these writings were best sellers of their time, but today they are too much an ill-kept secret. Yet I bet the average person living in the U.S. today only knows the name of one of the authors of these narratives. Read a first-hand account of the middle passage. Learn about the woman who spent almost a decade in a crawl space to escape the life of a slave. Find out the story of a man who risked life and limb to give public lectures against slavery, while he himself was still not legally free. You will never know what has been hidden from you, you owe it to yourself, your mother, and your child to read these stories told by Black people who lived through, and fought against, slavery. I also highly recommend Beloved, both the movie and the book, as well as the recent PBS series on slavery.
Copyright © 2020 Thriftbooks.com Terms of Use | Privacy Policy | Do Not Sell My Personal Information | Accessibility Statement
ThriftBooks® and the ThriftBooks® logo are registered trademarks of Thrift Books Global, LLC