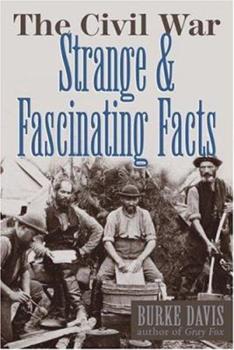 The First, and Still the Best of All Civil War Trivia Books!

Published by Thriftbooks.com User , 17 years ago
When "The Civil War: Strange & Fascinating Facts" or, "Our Incredible Civil War" was first published in 1960, America was on the eve of "celebrating" the 100 anniversary of that poignant, defining moment in our history. We were also on the verge of finally bringing those rights to Black Americans that rightfully should have been granted after Appomattox. Burke Davis' book was an instant bestseller then. And almost 45 years later still is. Mr. Davis covers the all of the major and minor incidents of the Civil War, from 1812 war veteran and Gettysburg civilian John Burns grabbing his musket and going to fight alongside the Union Iron Brigade at that decisive battle, to the tragedy of Confederate Isidore Guillen, who inherited the horse that his two brothers were killed riding on, only to be mortally wounded himself, to the humorous story of Jason the mule, who would go into the tent of a Confederate colonel late at night because that colonel resembled his owner! Davis also cites practically all of the amazing inventions of the Civil War, and he was the first historian to cite the story of the C.S.S. Hunley, the Rebel sub that was the first to sink an enemy vessel, but went down with all hands in Charleston Harbor. There are also enthralling chapters on foreigners who served on both sides, on spies,on famous sea battles, including the one between the U.S.S. Kearsarge and the C.S.S Alabama in the French harbor of Cherbourg, thousands of miles away from North and South,and yes, there is even a chapter on sex in the Civil War too. This book is a treasure trove for Civil War enthusiasts (I have sent copies of it to my friends) - and the word "trivia" demeans its importance. But I couldn't think of another word to describe it in my review title. Thank You Very Much for this book, Mr. Burke Davis.

Published by Thriftbooks.com User , 18 years ago
If you thought you knew everything about the civil war than chances are you were wrong. I found out things in this book I never knew, like Robert E. Lee was buried without any shoes, an 8 year boy watched as Jefferson Davis was driven off to prison and that boy was Woodrow Wilson, plus so many other facts covered in this book.If you enjoy fascination facts than this book is for you.

Published by Thriftbooks.com User , 19 years ago
After a lifetime of reading, Burke Davis put together a book of amazing and interesting pieces of information that don't usually show up in the historical accounts of the Civil War.Here are a few examples of his research: The Civil War was known by more than twenty-five names. The most unusual: The Brothers War--The War to Suppress Yankee Arrogance--The War for the Union and The War of the Rebellion.Abraham Lincoln had smallpox when he gave the Gettysburg Address and several members of his wife's family were soldiers in the Confederate Army. Also President Lincoln admitted that one of his favorite tunes was "Dixie." General Nathan Bedford Forrest, CSA had twenty-nine horses shot from beneath him during the war years. Belle Boyd started her career as a spy for the South when, at the age of seventeen, she killed a Federal soldier. After the war, about 3,000 former Confederate officers left the South and moved to foreign countries. And there's so much more to learn.

A solid look at many little-known aspects of the Civil War.

Published by Thriftbooks.com User , 21 years ago
This book was a welcome find when I was pulling together source material for my book, Everyday Life During the Civil War. As Burke Davis says, it is a serious book, and contains a wealth of information not easily gleaned from other sources; it is unfortunate that the words "strange" and "fascinating" seem to have given some the wrong impression of this work. I recommend it for anyone interested in the Civil War.

The stories behind The Story

Published by Thriftbooks.com User , 23 years ago
Did you know that the owner of the farm where the first Civil War fighting took place hosted the peace treaty signing in his front parlor in Appomattox? Col Wilmer McClean, seeking to escape the fighting after the First Battle at Bull Run, moved to Southern Virginia and settled in Appomattox. Little did he know the fighting would eventually follow him--and end with the meeting of Grant and Lee in his front parlor. Minutiae and the smaller aspects of the Great War Between the States is all documented in this rather small volume. This is not a stale treatment of those lesser-known facts of the Civil War, but a lively telling of those incidents and thoughts on the Great American Schism. It is hard to put the book down once you start reading it. A must read.
Copyright © 2020 Thriftbooks.com Terms of Use | Privacy Policy | Do Not Sell My Personal Information | Accessibility Statement
ThriftBooks® and the ThriftBooks® logo are registered trademarks of Thrift Books Global, LLC