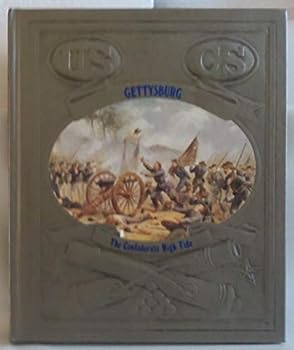 This volume is one of a series that chronicles in full the events of the American Civil War, 1861-1865. This description may be from another edition of this product.

A great place to start...

Published by Thriftbooks.com User , 17 years ago
In preparing for a trip to Gettysburg, I wanted a book that would provide a brief but concise history of the Battle of Gettysburg. Gettysburg: The Confederate High Tide by Champ Clark (part of the Time-Life Civil War series) is the perfect book. Gettysburg starts a month after the Battle of Chancellorsville, and details how the two armies managed to meet up in this tiny, rural Pennsylvania town. Neither army was fully prepared for what became one of the bloodiest battles and the turning point of the Civil War. Over 160,000 soldiers converged on Gettysburg, and Clark does an admirable job of breaking the three day battle into understandable engagements. Maps are provided to better see troop positions and troop movements. There are dozens of photographs, and the ones taken immediately after the battles are very sobering. There are also fascinating reproductions of paintings by Peter Frederick Rothermel and Paul Philippoteaux. Both artists traveled many miles, talked to hundreds of soldiers and spent years recreating these battle scenes. But where Clark excels is bringing this story to life through stories, quotes and anecdotes. My only complaint about Gettysburg comes from the fact that it is one of a series of books, and I only read this one. I had a hard time at first keeping track of whether officers were Confederate or Union. Perhaps a list would have made things easier. But this complaint aside, I'll be traveling to Gettysburg with a much better understanding of this historic battle.

Published by Thriftbooks.com User , 20 years ago
"Gettysburg: The Confederate High Tide" is the volume in the Time-Life Civil War series devoted to the most famous battle in American history. Author Champ Clark does a marvelous job of both providing the basic information for understanding the strategy and tactics of the battle as well as providing intriguing details for those more intimately familiar with the story of Gettysburg. For example, there is a photograph of Dan Sickle's shattered leg bone that was amputated on the second day of the battle and which he visited at the Army Medical Museum in Washington periodically for the rest of his life. The book is divided into five chapters. "A Hard Road North" covers the movements of the Army of Northern Virginia and the Army of the Potomac north from Fredericksburg to begin converge on the town of Gettysburg on the last night of June in 1863. A very detailed map of the troop movements is provided. This chapter ends with a look at "Soldiering on Horseback," which looks at the trappings of the cavalry, including a McClellan saddle. "The Push to Seminary Ridge" tells of the first day of battle, July 1st, as John Buford's dismounted Union cavalry held off the advancing troops of Henry Heath's troops along the Chambersburg Pike. Most readers know of the strategic importance of getting the high ground at this battle, and Clark covers all of the key moves in this fatal dance. In this chapter particularly, Clark does a nice job of combining the military maneuvers with fascinating human elements of that day, from the stories of local civilians John Burns and Jennie Wade, to the battlefield friendship forged between Union General Francis Barlow and Confederate General John Gordon, and the story of Lt. Bayard Wilkinson, who commanded a Union battery and amputated his own leg after being hit by a shell. "Through the Valley of Death" deals with the action on July 2nd, which begins with General Dan Sickle's idiotic redeployment of his III Corps off of Cemetery Ridge and ends with the defense of Little Round Top. The latter, with the pivotal role played by Joshua Lawrence Chamberlain's 20th Maine, is one of the centerpieces of the film "Gettysburg." The consequences of Sickle's blunder is covered in "Fury in the Peach Orchard," which we tend to remember up here in the Northland because General Winfield Scott Hancock ended up plugging the massive hole in the Union line created by Sickles with the 1st Minnesota regiment, whose 262 men attacked an entire Confederate brigade to buy time, at the cost of 82 percent of its men. This chapter ends with "An Artist's Portrayal of the Battle," which looks at the works of Peter Frederick Rothermel, who was commissioned by the state of Pennsylvania in 1866 to do a series of paintings of the battle. Before the book's final chapter, we get "A Panoramic View of the Last Charge," a 400-foot cyclorama by French artist Paul Philippoteaux recreating Pickett's charge (If you visit the Gettysburg Battlefield, it is a must-see). Of cou

Published by Thriftbooks.com User , 22 years ago
In the usual CAMPAIGN format, but double sized, this book follows the whole Gettysburg campaign, starting with the Army of Northern Virginia "invasion" up to their retreat.There are the standard "3D" maps showing the actual battle, day by day, and *lots* of period photographs, as well as modern day drawings.For modellers (my case!) there is plenty of material for uniforms, weaponry, and dioramas. Wargamers also get some attention. I heartily recommend all of the Civil War Osprey Campaign books: Antietam, Fredericksburg, Manassas, and so on!
Trustpilot
Copyright © 2022 Thriftbooks.com Terms of Use | Privacy Policy | Do Not Sell or Share My Personal Information | Accessibility Statement
ThriftBooks® and the ThriftBooks® logo are registered trademarks of Thrift Books Global, LLC