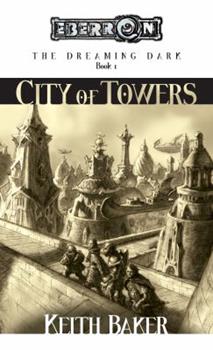 The City of Towers (Eberron: The Dreaming Dark, Book 1)

(Part of the The Dreaming Dark (#1) Series and Eberron Series)

Battle-hardened veterans of the Last War, four soldiers journey to Sharn, the legendary City of Towers, to seek a new life, but in a time of uneasy peace, the city is suddenly threatened when people start turning up dead. Original.

Published by Thriftbooks.com User , 15 years ago
Ebberon is a new world to me, and I bought this book just to test the waters (I'll be buying more in the future). I was surprised at how quickly and completely I became absorbed in this book. The world of Ebberon is a masterfull blend of pure fantasy (with gnomes, goblins, elves, and ogres) and science fiction (from flying ships and buildings to teleportation and sentient robots). As Daine, Jode, Lei, and Pierce explore the great city of Sharn, the wolrd of Ebberon is introduced in a manner which allows for no prior knowledge of the settings to fully appreciate the story. The characters are complex and each have somewhat mysterious pasts that will be explained in following books. The storyline is intriguing and I can't wait to read the next two books. I was very impressed with the world of Ebberon, a world in a dark age in which powerful forces combat with magic and technology. This first book gives a glimpse into a world which promises to hold plently of mysteries and wonders. Can't wait for more.

Published by Thriftbooks.com User , 15 years ago
What can be said? If you want to get an inside view of Sharn, then go to the source -- Keith Baker. An excellent presentation of the City of Towers and a must read for anyone running a campaign in Sharn.

Published by Thriftbooks.com User , 15 years ago
For number of ideas and richness of the world, there are not many openings to a trilogy that beat out this one from Baker. The setting is obviously developed in his mind in great detail, so that it all holds together as the characters move through the story, and the ideas and mysteries within were intriguing enough to keep me reading the book straight through. If you ever played role playing games, you'll also recognize those late nights with the dice which is kind of fun. Looks like a great start, I'm waiting for book two.

Published by Thriftbooks.com User , 16 years ago
For a while I was very sceptical of the new world being produced by the folks over at WotC. However, I decided that I would give the new world and the creator of the world a chance since this was the first book ever produced for it. Figure if nothing else I can actually start into a new series at the beginning (instead of much last like FR and DL). What I found was a very awesome book, which had very well developed characters, interesting twists, and everything I could ever expect from a book. It seems that the essense of what is Eberron definitely comes through in the book. Further, I was worried that with all of the magic that the world might be something which was only barely fantasy, and I am pleased to see that it is not the case. This is what it is hyped to be, in my mind, a world where magic is not something which is just for a few gifted people, but something which is present all the time. I HIGHLY recommend this book to anyone who likes D & D and if you are a skeptical FR or DL reader, just add one more world to the list, you'll be thankful

Published by Thriftbooks.com User , 16 years ago
"City of Towers" is a light, exhilirating read. It tells an exciting story that rockets forward at the speed of a Dan Brown novel, complete with plot twists at the end of every chapter. Everything's an mystery that will keep the reader guessing, even the personal histories of the main characters. It's a very fun book. Perhaps more importantly, the book is a wildly imaginative example of fantasy world-building. Eberron shows its Dungeons & Dragons roots, complete with the usual dose of humans, elves, dwarves and goblins. But it's a long way from Tolkein or even Forgotten Realms. Eberron has the shadowy morality of a noir detective story, the high-concept action of a WWII pulp adventure, and the sophisticated intrigue of a modern spy thriller. The book's setting is a city of sky-scraping towerrs, home to elemental-powered airships and arcane-blooded nobles. It's a very neat place, and the creator fleshes it out in scintillating detail here. By giving this book a five-star review score, I don't mean to suggest that it's one of the greatest books you'll ever read. But it rides high in the genre of breezy, fast-paced heroic fantasy. Give it a try!
Copyright © 2020 Thriftbooks.com Terms of Use | Privacy Policy | Do Not Sell My Personal Information | Accessibility Statement
ThriftBooks® and the ThriftBooks® logo are registered trademarks of Thrift Books Global, LLC