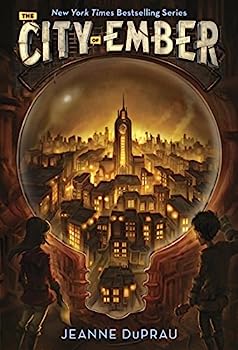 (Book #1 in the Book of Ember Series)

Ember is the only light in a dark world. But when its lamps begin to flicker, two friends must race to escape the dark. This highly acclaimed adventure series is a modern-day classic--with over 4... This description may be from another edition of this product.

One of my favorite books growing up!

Published by Sarah , 8 months ago
This was probably the first series I ever fell in love with- I had to read every book cover to cover. Clever protagonists and an exciting adventure in a post-apocalyptic underground town.

A Great Start To A Fantastic Series

Published by Thriftbooks.com User , 14 years ago
This is the type of book that gets you hooked. You start reading and are enjoying it, but then the more you read the better it gets, the more you like it, you feel involved in the drama and action and want to help the characters, help them solve the mysteries and problems. I highly reccommend this book. It has an air of mystery and intrigue about it that fills you with curiosity for what will happen next. The author can perfectly relate to you the characters thoughts and feelings and not one emotion is out of place. The novel is not highly predictable so you don't feel like it's a waste of time to finish. This book has light humor in it and would be good for kids aged 8-12. It will even satisfy fantasy and sci-fi lovers alike. Not at all confusing, expertly written and worthy of five stars.

Published by Thriftbooks.com User , 18 years ago
Plot descriptions have already been done, so I'll offer my commentary. The (barely) three page prologue sets a splendid dramatic tension for the story. We know that something is afoot, that there is more to Ember than Ember, and that empowers us, to a certain extent - like when you're watching a movie and you know something that the characters don't. We see the development of this through the eyes of two twelve year olds, both very different children. Doon has a temper and is rather sullen, and Lina is a bundle of hope and joy. But their depth goes beyond that. These are three-dimensional characters, a rarity in children's books. Also rare is the sturdy, clear writing. It never felt rushed, always felt poised. The only thing that wasn't handled with perfection was humor. I should have laughed when Doon threw a shoe heel and it hit his father in the ear, but I didn't. But that's OK. Eoin Colfer can be funny, and Ms. DuPrau can simply be a better writer. I found a few plot points strained: 1) Lina being the great-great-great whatever of one of the mayor's mentioned in the prologue; 2) Her own grandmother's mad search for something that now, in her dotage, she remembers is of the utmost importance; and 3) Poppy getting her hands on the thing that is important and rendering it nearly indecipherable. But those are minor points. They exist to move the story from one point to another, and the story isn't really about the discovery of the Instructions for Egress, it's about the city of Ember itself, how its inhabitants have adjusted to living in a city where there is no light after nine (because the only light the city has is electricity and it knows nothing of the Sun), deciphering the Instructions for Egress, and the action of egress itself. I felt that the city of Ember, with its surprisingly complex social order was an ingenious invention, and the handling of all other points mentioned above was done masterfully. When I finished reading this I couldn't help but think to myself: what a shame that more children will have read Shadowmancer than The City of Ember. The latter is a far superior book, in every way. I found myself, more than once, wanting to walk the streets of Ember, just to see what it felt like. Ms. DuPrau did a terrific job of making this imaginative city real and tangible.

Published by Thriftbooks.com User , 18 years ago
I read this book straight through in one sitting, because I simply couldn't put it down. It was quite simply one of the most beautiful stories I've ever read - I place it in the ranks of Pullman's His Dark Materials. Its deceptively simple writing style builds a vivid world around you as you read, and hurtles you headlong into the story - and promptly embeds the characters inextricably in your heart. The main character, Lina, is as beguiling as they come - spirited, determined, and far, far too nosy. Her friend Doon is adorably scowly and moody, her grandmother delightfully batty, and the mayor of the town so vividly painted that by the time he'd finished his third sentence he stood fully formed in my mind. Although characters aren't this book's only strength...The plot played out almost like a song, lyrical and swaying, full of the stuff of life. I was filled with humor, curiosity, terror and joy in rapid succession, only to start the cycle again at the next turn of the page - and by the end of the book I must confess I was a bit misty eyed. And, without spoiling anything, I'll say that the last couple of paragraphs filled me with bubbling anticipation, and now I think I'll explode if I don't find out what happens soon!Come on, Duprau, give us the next book!

great read for kids and adults

Published by Thriftbooks.com User , 18 years ago
I just finished City of Ember and I was amazed at how good it was. I've been reading science fiction and fantasy my whole life and was still very impressed with this good read. I picked this up because of the appealing cover design as a gift for my nephew. I thought I'd read a little to see if it was interesting. I read half the book that night and the rest the next day. If you like Harry Potter or John Christopher's Tripods series you will definetely like City of Ember. The book moves along very quickly and smoothly with engaging characters. The solutions that the characters find to the (clever plot device) shreddded instruction sheet puzzle keeps you turning back to page 94 to check and double check your own guesses. Although this is the first book in a series(?)it has enough closure at the end that you feel fulfilled and don't feel cheated. I'm looking forward to the sequel to this very satisfying read.

Not since Oz has a city been more intriguing

Published by Thriftbooks.com User , 19 years ago
The city of Ember is in trouble, but the complacent citizens seem to ignore the food shortages and frequent blackouts. The Builders, when they created the city some 241 years ago, made provisions for its citizens in the form of a note called "The Instructions." Unfortunately, The Instructions were not handed down through the generations as they were supposed to be, and suddenly 12-year old Lina, a city Messenger, has discovered them. After trying to tell her friends and even the Mayor about the discovery of the partially destroyed Instructions, Lina turns to a one-time school friend, Doon, a worker in the underground Pipeworks, whom she believes will understand their importance. But what can two children do with such important information, and who would even believe them?The City of Ember is a clever novel which tells the unique story of two unintentional heroes who fight the status quo in order to bring hope to their city. The descriptions of the world of Ember are fascinating, leaving the reader to appreciate the incredible imagination of first-time novelist Jeanne DuPrau. The narrator thoughtfully informs us of the setting-the unusual and self-contained world of Ember-slowly throughout the novel, and not all at once in the first chapter. It's only in chapter 8 that we even realize that there are no animals in Ember and the words "heaven" and "boat" have no known meaning. The characters are outstandingly original yet touchingly familiar in their pre-pubescent views of the adult world. The deaths of Lina's parents and then custodial grandmother create a sympathy for her that causes us to, all the more, wish for her triumph. It is the curiosity of Lina and Doon that drive this narrative, and it is the nice balance between primary and secondary characters that keeps the reader on his/her toes. While we expect a happy ending, it's not until the final pages of the novel that we understand what has happened and why. And, as always, we forgive a good author for the blatant suggestions of a sequel.

The City of Ember Mentions in Our Blog 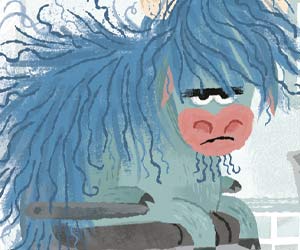 As we head into fall, there are so many exciting books coming out for kids. Cooler weather means kids are spending more time indoors and they need something good to read. Here are twenty hotly anticipated titles for kids of all ages. 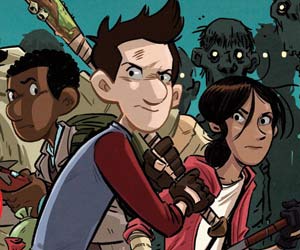