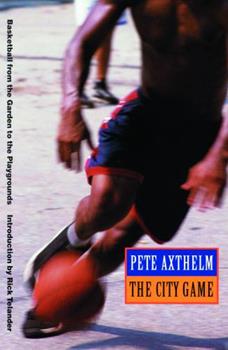 The City Game: Baksetball from the Garden to the Playgrounds

Pete Axthelm follows the 1969-70 season of the New York Knicks and provides a parallel focus on basketball as it was then played in the black neighborhoods of New York City. Throughout, he writes clearly, intelligently, and passionately about the game, bringing alive the players' efforts, accomplishments, and failures.

Published by Thriftbooks.com User , 11 years ago
Pete Axthelm's classic basketball book, The City Game alternates between basketball as it was played in Harlem in the late 1960s and early-1970s and the 1969-70 Knicks championship season. The dual storylines work, and to call them juxtaposed would be inaccurate. They're woven together seamlessly by Axthelm, who wrote the book on the heels of the first Knick championship and had it on the shelves before the close of 1970. I read The City Game for the first time when I was 13. I had basketball fever bad, and I would pore over Slam magazine every month. They ran a lot of streetball stories at that time, and I developed a real interest in guys like Earl Manigault and Herman Knowings. And like any Knick fan, I knew about Bradley and Frazier and the rest of the championship teams. When my dad gave me his copy of The City Game, I couldn't believe what I was reading. Someone else had seen the connection between streetball and pro ball? I thought I was the only one, in a way that only a 13-year-old can. I'm more than twice as old now as I was when I read the book for the first time, and I was curious to see whether it was as good as I remembered. It was better. Axthelm was a talented writer, and the cast of characters in the NBA made things easy for him. Kareem was still Lew, Wes Unseld, Earl Monroe, Jerry West, Wilt Chamberlain, not to mention "Clyde" and Dave DeBusschere and Dick Barnett and Willis Reed were all battling up and down the NBA. Every match-up the Knicks face is compelling, every game a war. Axthelm got deep into Harlem and he profiled those who made it out of the neighborhood and those who didn't. His words about Manigault were written before "The Goat" turned his life around, making his story especially sad. There are positive stories too, Harlem playground heroes who made successful middle class lives for themselves as hard working city servants, men who supported their families and were true role models. I could never resist a book with a paragraph like this: "The politics of hate and polarization had thrust deep into New York's guts, and few people on either side could relish the sight of open war between Nixon's new Silent Majority and the young, the poor and the black. Countless people groped for sanity in the wounded city, and wondered if it would be sundered irreparably. Some of the spectators who came to watch the Knicks that night may have wondered just how much they could still care about a game. Then the Knicks showed them. They didn't solve the world's problems, any more than playground games can cure the ills of the ghetto. But, like a ghetto game, the Knicks and the Lakers did offer a moment of high drama, a brief or necessary escape from reality- a transcendent experience, which in the end, is all anyone can ask of a sporting event." OK, and how about this about Dave DeBusschere: "In the off-season, DeBusschere is a stockbroker. He is also an author, having kept a tape-recorded diary of las

Published by Thriftbooks.com User , 12 years ago
I always wanted to read this book which was written in the early 70s. It was excellent. The author, the late Pete Axthelm, does a great job of portraying the New York Knicks and pro ball along side the streetball side of the game.

Published by Thriftbooks.com User , 13 years ago
This book is about basketball and the way it is supposed to be played. True historical heros of the professional game and heros that didn't make it off the streets. This is the time of the NBA that is currently being referenced by analysts of today's game. An excellent read!

Published by Thriftbooks.com User , 20 years ago
Pete Axthelm has a handle on what makes basketball a wonderful sport, and why many of us are in love with it. He doesn't seem to know exactly what he wants to do with this book. Is he reporting on inner-city basketball heroes? On their gravity-defying dunks, or their lightning-quick handles? Or is he reporting on 1970, the year the Knicks won the NBA Championship. The two stories don't intertwin seemlessly as he would have them, and you are left feeling like you haven't been fulfilled on either of the stories in this book. I gave this book 4 stars based more on his obvious joy in writting it (which makes it very fun to read) than his actual skill in writting it. I would have been much happier buying two books as long as this one, one on inner-city basketball in New York City, and one on the Knicks Championship of 1970.

Published by Thriftbooks.com User , 22 years ago
This has the greatest combination of the Knicks first Championship season and the best of the playground Legends and Players. It shows the good and the bad of basketball in New York. It describes some legendary games by some of New York's finest athletes like the "Hawk","Goat","Destroyer","Helicopter",etc. If you love the true game you should get this book. Much love to Earl "The Goat" Manigualt who past away last year.
Copyright © 2022 Thriftbooks.com Terms of Use | Privacy Policy | Do Not Sell My Personal Information | Accessibility Statement
ThriftBooks® and the ThriftBooks® logo are registered trademarks of Thrift Books Global, LLC