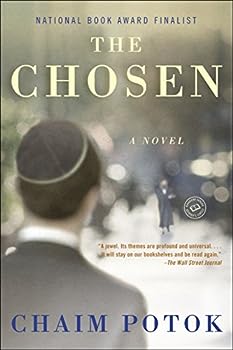 (Book #1 in the Reuven Malther Series)

This description may be from another edition of this product. "Anyone who finds it is finding a jewel. Its themes are profound and universal."-- The Wall Street Journal It is the now-classic story of two fathers and two sons and the pressures on all of them to...

The Chosen is one of my all time favorites!

Published by Marl , 1 year ago
The style of writing in The Chosen is unique and engaging, the characters are well defined, and the setting is not overly described, yet you get a good feel of it. It is obvious that Chaim Potok knew what he was doing when he wrote this beautiful book! I would recommend this book to anyone interested in learning about Jewish culture in more depth. The plot revolves around the main character, Reuven, and his friendship with Danny set in the end of WWll. It is not nessesarily a light read, but it gets you thinking. Don't be intimidated if the start feels a bit slow, it will pick up and draw you in! If you liked this book, I would also recommend My Name is Asher Lev by Chaim Potok. (I would not recommend The Chosen's sequel, The Promise. It was too strange and dark for my taste) Have fun reading!

Published by Rose Bryce , 2 years ago
One of the most beautiful books I've ever read. And that is from a very long life of reading. Do read this treasure. It will bless you for the rest of your life - be it long or short.

Published by Thriftbooks.com User , 13 years ago
Every so often you go through a period of reading lacklustre books that make the lazy demon in you think of stopping, then you pick up a book like this and your thirst for the written word returns with a vengence! I was recommended 'The Chosen' some years ago, and turned to it after just such a lull and it truly delights; its a great story well told that gives the reader an insight into the conflicts that lay within Judaism;Danny the orthadox Hassid and Rueven become friends after Danny injures Rueven in a baseball game.The story flows with wonderful imagry from the hospital with Mr Savo and Billy;the streets the two boys live in;the Hassidic home of Reb Saunders,the historical background of WW2 and the birth of Israel;how the mass murder of 6 million Jews brought on a re think of passive waiting for a messiah in a harsh and modern world. This is great writing;up there with Bellow, Bashevis Singer, Malamud and Appelfeld.

A Classic In Every Sense

Published by Thriftbooks.com User , 20 years ago
This novel is suited for just about anybody regardless of religion or race. Those who are Jewish will relate a little easier but those of other faiths can apply the various relationships that occur in this book to their own lives.The story is primarilly about two boys, Reuven and Danny who meet one day in a softball game. Danny is a Hassidic Jew and Reuven is merely Orthodox. Danny's initial impression is one of disdain towards Reuven as he is unable to relate to people who are not on his religious level at first impression. An accident on the ball field brings them together and eventually they begin a friendship. It grows deeper when both their fathers are drawn into each others worlds. It is indeed very interesting how each father raises his son so diffrently.The backdrops of the hospital, World War II, the surrender of the Nazis, The Zionist Movement, and the eventual statehood of Israel effect the two worlds of Danny and Reuven. There is a period of time when the Zionist movement causes Danny and Reuven to put their friendship on hold. However, in time they return to nurture each other.This is not a quick read by any means as anyone with a soul with be enamored by the details of this fine novel. Practically each page offers descriptive information about critical steps that Danny and Reuven take in their critical years to discovering themselves. Even both fathers learn something in the end. This is a story which will have you thinking and analyzing many many aspects of the lives of Danny and Reuven and I sincerely hope more teenagers and college students read this book and develop a greater acceptance for peers who may be a little different from themselves.

"The Chosen" Is A Miracle For All

Published by Thriftbooks.com User , 21 years ago
I am an African American attorney who read this book as part of collecting readings for a summer trip with Operation Understanding to share with Black and Jewish high school students. Operation Understanding takes 8 Black and 8 Jewish students between their Junior and Senior years of high school on a trip across the South and Northeast, stopping at places of significance to both, in an effort to restore the alliance that existed between the groups especially during the Civil Rights Movement. This was the perfect book to gain a deeper understanding of American Jewry for the trip.The book explores the relationship between two deeply religious boys from profoundly different traditions within that religion who are accidentally -- divinely, really -- brought together. The development of both boys' spirituality starts with lessons from their fathers and deepens with lessons from each other.The Chosen takes place in World War II America. I was already familiar with many of the classic accounts of Holocaust survivors (Anne Frank, Elie Wiesel, and others.) This book richly filled a gap in that understanding by presenting a fully formed first person account, though ficitious, of the wrenching experience of American Jews who helplessly learned of the horror from here.The book also offers thorough background information (which will have to be supplemented by further reading) about Jewish history, both cultural and religious. The author patiently explains terms presumably unfamiliar to the general reader and then trusts the reader to turn back if, during the course of reading the novel, the terms are momentarily forgotten. Those reviewers who said that Potok left the reader unaided were simply not paying close attention.Beyond its fascinating historical and religious perspectives, this book's elegant craftsmanship and universal themes will move anyone, regardless of background. Potok's gift for writing regional American dialogue is similar to that of Twain and Steinbeck. Thematically, especially moving to me was the way in which the fathers' mostly wordless love and support for their sons manifested itself in the friends' often wordless love and support for each other. It is significant in this regard that the fathers never meet in the novel, even as they separately express a conflicted admiration for each other when each speaks to one or both boys. When both boys choose career paths their fathers had not expected, Potok allows the reader to share all four characters' realization that it is fulfilling the expectations of God, the Father that ultimately matters most.I will share an excerpt of this extraordinary book with the young people on our trip. And when we reach New York, my hometown, I'm giving my copy to my Dad.

Published by Thriftbooks.com User , 21 years ago
I had to read the Chosen for my 8th Grade English class in1998. It is without a doubt the best book I have ever written. I readit in under 2 days, and since then have read almost all his books dealing with adolescent Jews. This book shows what it means to be Jewish, that Judaism is as much about personal relationships with God as it is with others, with the community. It shows that friendship conquers all, even schisms in religion. It was a big insight into the sometimes mysterious worlds of Hasidism and Orthodoxy, and is useful in showing differences (I was not aware of any until I read this book). I am a secular jew and identified strongly with both characters.For the students who say it was boring and that only Jews could understand it, I think they should have done some research before starting it. For instance, you shouldn't read this book until you know what the Torah is, at least. A glossary at the back would have helped comprehension, but would have taken away from the story as well. By not proviving definitions every five pages, Chaim Potok let the story envelop readers, so that they felt that they knew everything Danny and Reuven knew. If the students didn't understand something, they should have looked it up, like the students in my class should have. I cannot believe that anyone can say this was boring, as I think it is one of the best looks into stricter American Judaism. Such books are necessary for the reform Jews of today who regard Orthodox Jews and Hasidism as fanatics and extremists. His books "The Promise", "My name is Asher Lev", and "The Gift of Asher Lev" are good for this purpose as well.The character of Reb Saunders is one of the most original ones I have ever encountered. He makes me understand my late grandfather, a "Born-again Jew" better.This book has impacted my life and I will always be grateful to Chaim Potok for writing it. He is a genius, and I hope he lives to write many more masterpieces of litterature.
Copyright © 2020 Thriftbooks.com Terms of Use | Privacy Policy | Do Not Sell My Personal Information | Accessibility Statement
ThriftBooks® and the ThriftBooks® logo are registered trademarks of Thrift Books Global, LLC