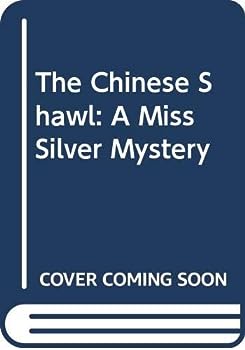 (Book #5 in the Miss Silver Series)

This description may be from another edition of this product. In this classic British mystery starring a sleuth "who has her place in detective fiction as surely as Lord Peter Wimsey or Hercule Poirot," Miss Silver investigates a murder that may have its roots...

Miss Silver Figures it out again!

Published by Thriftbooks.com User , 17 years ago
In this book, Miss Silver is at a country priory that is the residence of Agnes Faine and her sister. She is there at Miss Faine's request to determine the cause of some thefts and finds herself in the middle of a family feud. As usual we get to see Miss Silver's keen mind at work as she solves the crime. No one does English country manor mysteries like Ms. Wentworth did. She has the genre pretty well sewn up, I think. In this one the long-standing family feud makes for a long list of suspects when a body is found at the bottom of a staircase.

Published by Thriftbooks.com User , 19 years ago
This case strays from what I think of as the usual Silver format, in that private enquiry agent Maud Silver isn't brought in during the 2nd or 3rd chapter by one of the sympathetic young lovers who generally turn up in her cases. Instead, she appears after a few chapters of character development spelling out quite clearly just how many people - both would-be lovers and *their* discarded partners - have a motive to kill Tanis Lyle, and Maudie's already engaged in a separate case - a matter of petty thefts from Tanis' wealthy guardian Agnes, who then extends the engagement to cover the murder investigation. (Agnes and her cousin Lucy are old acquaintances of Maud's school days, although they were never close, so she's actually staying with the client rather than a separate old school chum for once.) However, in this instance the flexing of the bonds of the Silver format does no harm; a very pleasant read as either a novel or a puzzle, if you like mysteries spiced with other human problems.As in a later case, _Through the Wall_, at least two potential murder victims bear a strong enough likeness that when one is killed at night while wearing some of the other's clothing, there's some question as to which was the intended victim. Another similarity is that one is the (apparently) morally worthy heiress, the other a femme fatale, although in a much more drastic contrast than in the later book, where the femme fatale is a (somewhat) more sympathetic character. Motive won't help sort this one out - anybody who didn't have a motive to kill Tanis Lyle did have a motive to kill Laura Fane, and vice versa.Laura Fane, as the sole surviving member of the senior branch of the family, holds title to the family estate - the Priory - but the next branch of the family has leased it for many years, since they had the money to keep it up, so cousin Agnes has lived there all her life. Jilted by Laura's father, then partly paralyzed by a riding accident, she's devoted herself to 3 things: nursing her grudge against Laura's long-dead parents, maintaining the Priory, and raising her orphaned young cousin Tanis Lyle. Agnes wants to buy the Priory outright, and to persuade Tanis (via her control of the pursestrings) to settle down and raise her son (currently parked with her ex's family), but Tanis prefers proving in wartime London that the enemy isn't the only destroyer of good men - or relationships.Laura, on the other hand, while bearing a physical likeness to Tanis, is leavened with the milk of human kindness rather than a taste for cat-and-mouse games with men - or their partners' jealousy. But when she and one of Tanis' recent discards - a decent sort with a Distinguished Flying Cross, recovering from injuries that grounded him with temporarily messed-up depth perception - begin falling in love, Tanis arranges matters so that "the aunts" will be sure to raise Cain, seeing Laura as "stealing" Tanis' man, just as Laura's father jilted Agnes for another woman. When one

She picked up the shawl, and minutes later she was dead.

Published by Thriftbooks.com User , 19 years ago
By the time you have read the first half of this 1943 murder mystery, you will know that Tanis Lyle is a beautiful young woman who has many enemies. When the butler then discovers Tanis's body, and the "small round hole in the silk of her coat a little below the left shoulder-blade", you will suspect that one of them has murdered her. You could be wrong! Miss Maud Silver, eccentric in dress and quaint in manner, will eventually be able to explain why. Patricia Wentworth, like several other female British crime writers of her generation, contributed to the so-called "War Effort" in the early 1940s by increasing her production of the sort of murder mysteries that provided cosy, escapist relaxation. This one is a successful blend of her usual ingredients: romance, relationships, family dynamics crossing several generations, a murder or two, Miss Maud Silver as sleuth, and lots of dialogue.
Copyright © 2020 Thriftbooks.com Terms of Use | Privacy Policy | Do Not Sell My Personal Information | Accessibility Statement
ThriftBooks® and the ThriftBooks® logo are registered trademarks of Thrift Books Global, LLC