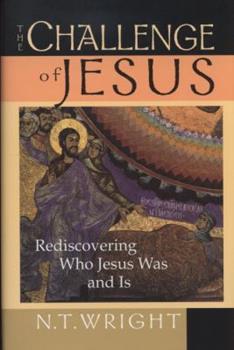 The Challenge of Jesus: Rediscovering Who Jesus Was & Is

Today a renewed and vigorous scholarly quest for the historical Jesus is underway. In the midst of well-publicized and controversial books on Jesus, N. T. Wright's lectures and writings have been widely recognized for providing a fresh, provocative and historically credible portrait. Read his thoughts in this original edition, or get the most recent edition for even more insight with an all-new introduction by the author. Out of his own commitment...

Wow! What a book!

Published by Thriftbooks.com User , 14 years ago
Wright has outdone himself in this work that is a capsule of his work "Jesus and the Victory of God", but here has has taken that massive work and laid it out simply for everyone to enjoy and be blessed by it. Recently I was asked for the single best book that I had read outside the Bible and I wanted to recommend something that everyone could read. I responded with Desmond Tutu's "No Future Without Forgiveness", but now I have found the book that reflects succinctly who Jesus was and is and I highly recommend this work. Wright takes the scriptures very serously, especially how the New Testament writers as well as Jesus, saw God acting and bringing the story of Israel and the world to its climax in Jesus life, death, resurrection and pouring out of the Spirit and how to implement the story of Jesus in today's world. He takes the story of Israel and Israel's symbols of Torah, Temple, Feasts, and Sabbath's and interprets them in light of Jesus the New Israel, New Temple, and New Man who is bringing about a New Creation. His thoughts on the eigth day or the first day of the week as the New Creatin of God are transformative. Wow! I will say it again backwards, Wow! What a book! Wright is a scholar of theology and history and has thought through and through the story of Jesus and has taken seriously the questions of why did Jesus die? Why did they crucify him? Why theologically did he die? What does it mean that he rose from the dead? What does Israel have to do with these questions and what if anything do the answers to these question have to do with our world today. You will not be disappointed with how Bishop Wright has worked all this out. Get this book!

Published by Thriftbooks.com User , 19 years ago
N. T. Wright is undoubtedly one of the most important scholars in the field of New Testament Studies today. This book is a shorter, more accessible book of the ideas and research that he fully presents in "Jesus and the Victory of God." Wright's great achievement, in my opinion, is that he takes up the critical questions concerning the historical Jesus (posed by radical skeptics like John Dominic Crossan)...yet he proposes an answer that is at once intellectually credible and yet more faithful to the witness of the Gospels and the testimony of the Christian church. It would be an overstatement to call him a traditional conservative scholar, for he does not shy away from the issues posed by Biblical critics. Yet it is evident that his scholarly endeavor is motivated by a deep, abiding faith that Jesus of Nazareth is the unique revelation of the God of Abraham. This book will offer any serious layperson an enjoyable and challenging read.

FLAWED BUT EXHILARATING JOURNEY THROUGH THE MESSIANIC MIND

Published by Thriftbooks.com User , 19 years ago
The eschatological debate between liberal and conservative scholars is so deeply entrenched, so polarised, so emotionally charged that any reconciliation seems unlikely - at least this side of the Parousia! But what would happen if a theologian with impeccable academic credentials consciously set out to transcend these factions? The chances are, of course, that such an author would get shot at from both sides, even as both sides tried to claim him as an albeit wayward member of their own camp. And that is rather what is happening to N. T. ("Tom") Wright, Canon Theologian of Westminster Abbey. Wright has recently completed the second volume of a projected six-volume re-assessment of Christ's teaching and its relationship to the early Christian Church entitled "Christian Origins and the Question of God". In the shorter book reviewed here, "The Challenge of Jesus", Wright has produced a fascinating introductory overview of his thesis that will appeal to the general reader without underselling the author's status as one of the leading British theologians of his generation.Wright's starting point is the familiar and widely accepted truth that we must understand how Jesus and his contemporaries understood his teaching and his actions before we can apply them to our own setting. But Wright goes a stage further: Even with a sound understanding of this principle, the way the Church has traditionally acted out its mission does not do justice to the uniqueness and particularity of Jesus' works. Individual emulation of Jesus' actions and the lifestyle application of popular interpretations of his teaching, however culturally adjusted, are inadequate. In short we are not just people (plural) but the People (singular) of God, and Wright's conclusion is no less than that the Church must be to the World what Jesus was to Israel.That does not sound anything like as exciting or challenging at first sight as it will be once you have digested Wright's reasoning. He shows with unerring skill, both as historian and exegete, how Jesus subverted traditional Jewish symbolism and messianic expectations to supplant the Temple with his own person and position his own death as the central historical event in a new Exodus. In doing so, Wright brings together tools that will be familiar to both liberals and conservatives, and he is remarkably successful in making two important connections: Firstly, he shows in geopolitically and psychologically credible terms the connection between Jesus' actions and his death sentence. Secondly and even more strikingly, Wright shows in historically and spiritually credible terms the connection between the Jesus who walked and talked and the Christ of the Church's kerygmatic literature. The value of these achievements in a book that concurrently stresses the historic centrality of the physical death and resurrection (for which read literal re-embodiment) of Jesus Christ cannot be over-stated. That is not to say that the book is without flaw

flawed, but still worthy of the highest rating

Published by Thriftbooks.com User , 20 years ago
"Now all these things are from God, who reconciled us to Himself through Christ and gave us the ministry of reconciliation" (2 Corinthians 5:18 ) Jesus Christ came to reconcile us with the Father. Through his wounds we are healed. In "The Challenge of Jesus," N.T. Wright does a good job of helping us to try and look at Jesus with our blinders off. Rejecting the thesis of Wrede, and following in the footsteps of Schweitzer, Wright believes that we can learn a good deal about the actual, "Historical" Jesus (my, how that phrase has been abused in the last half-century) through doing the work of history. I praise Wright for attempting this grand task. "The Challenge of Jesus" is a shorter distillation of Wright's larger ongoing work which at the time of my writing consists of two published volumes (The New Testament and the People of God; Jesus and the Victory of God) with the series length now projected at six volumes total. This volume is no doubt aimed at a broader audience than Wright's more scholarly work. Wright attempts to look at Jesus without the lens of a controlling theology. I like this a lot. We should always read the Bible for what it actually says, remembering the context in which they were written, and then build our theology from that foundation. Too often, we make up a theology and then try and fit its square peg into the round hole that the Word of God confronts us with...there is a word for this kind of thing: idolatry. Wright manages to do a fairly good job of interacting with the Bible and history. He does disappoint me on his views of Jesus knowing whether he is God or not...he gives a waffling answer with unsatisfactory support. Wright's Jesus comes out looking a lot like the Jesus of orthodoxy in the things that he did: proclaiming the Kingdom, Dying a sacrificial, atoning, and reconciling death, making clear claims to divinity (in spite of Wright's own weird view on the matter,) and being Bodily Resurrected on a Sunday morning...the startling part of the book is the perspective...Wright solidly locates Jesus and his message within the milieu of second temple Judaism...the results give a whole new spin on the Message of Jesus. For me, this book has strengthened my walk with the Savior.In spite of its flaws, I'm giving this one five stars...it is incredibly thought-provoking. I recommend this book most highly.

An unsettling view of Jesus

Published by Thriftbooks.com User , 20 years ago
Wright's book will challenge all you have thought about Jesus, whether you are an evangelical or a diehard liberal. He is, in my opinion, wrongly thought of as "conservative" in his assessment of the historical Jesus. Be prepared to have your ideas about the resurrection, about Jesus's divinity, and about the apocalyptic passages in the gospels turned upside down. By doggedly placing Jesus within first-century Judaism, Wright makes us grasp how little we know about that time. While he offers a spirited reinterpretation of the resurrection, along the lines argued for by the Pharisees of the time, the total effect (at least for me) is further to undermine the belief in bodily revival and life after death still so prized by many Christians. I am not quite sure that Jesus' own resurrection is essential to Wright's thesis, although he strongly affirms that it is. Clearly, Wright does believe that the resurrection, where this means the restoration of Israel and the re-embodiment of the dead and the living, is still central to any conception of Christianity. At the end of the book you are left with a very human Jesus who likely never thought of himself as God, at least not as we use that term. He likely thought of himself as Yahweh's representative acting in Israel, as the herald of the end of Israel's exile, and as the human embodiment of the Temple, or the place where God dwells. If Wright is right, this changes everything. I have read everything that Crossan has written; this book shook me up far more.
Copyright © 2020 Thriftbooks.com Terms of Use | Privacy Policy | Do Not Sell My Personal Information | Accessibility Statement
ThriftBooks® and the ThriftBooks® logo are registered trademarks of Thrift Books Global, LLC