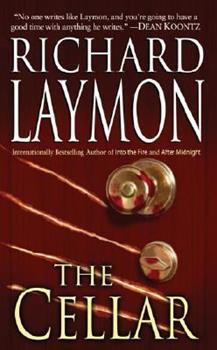 We receive 43 copies every 6 months.

Tourists flock to Beast House, but few ever return. Behind the cellar door lurks a creature of pure evil.

Laymon's first is one of his best

Published by Thriftbooks.com User , 15 years ago
Author Richard Laymon is best known for his doorstop-sized horror tomes. But in 1980, when his debut novel first appeared, he was not known for anything. This probably explains its trim physique. At just around 250 pages, The Cellar is likely the shortest thing Laymon has written outside of novel length. But there's just as much going on in its pages as in any of his heftier books. Donna Hayes and her young daughter Sandy are on the run from Sandy's pedophile father, Roy, who is in pursuit. They arrive at Malcasa Point, the hometown of the Beast House, a local tourist attraction and the site of nearly a dozen murder over the last century. A mythical beast is rumored to be the cause of the deaths, and a mercenary named Jud (short for "Judgment") Rucker has been hired by the only known survivor to dispatch the creature. Jud and Donna combine their efforts against their respective enemies while Roy takes other victims to fill the time until he can get back to his favorite. The Cellar is a lean, mean frightening machine -- David Garnett recommends it highly in his essay from Horror: 100 Best Books. Every word counts in this slim novel, and Laymon's skill at narrative is shown here already in full swing (as is his penchant for gruesome violence and deviant sexuality). He may have written better books or scarier ones, but he never wrote one that reads as quickly. Also, the surprise conclusion will likely shock even the most jaded horror readers (who usually expect a different kind of ending). For readers who enjoy their first foray into the Beast House, three sequels await: The Beast House, The Midnight Tour, and Friday Night in Beast House.

Published by Thriftbooks.com User , 16 years ago
Richard Laymon's first book The Cellar was released in 1980 to little or no fanfare. It soon became a cult classic. The story starts when Donna Hayes finds out that her husband Roy had just been released from prison. Donna grabs her daughter Sandy and flees. However Roy is right behind them. Roy is the type of person that you wished were dead. The first thing he does after finding Donna gone is pick a close house. The house with a little girls bike on the lawn. He knocks on their door, kills the owner and then his wife but not their daughter. Roy then sexually abuses the little girl. Unfortunately Donna's car breaks down and she gets a lift to the town of Malcasa Point, the town of the infamous Beast House. The Beast House is an attraction where some gory murders had happened. These murders were supposed of been caused by a legendary beast. The last of the three story lines is of Jud Rucker and Larry Usher. Jud is a assassin of sorts who is helping Larry. Larry is the only person alive that has seen the beast and lived. By the end all three story lines meet. In the Beast House. At night. But not alone. ----- Laymon is known for his clean style of writing. He uses dark humor, gore, extreme sexual situations and some of the best twist endings in horror. This book is not for the weak at heart! The ending is a shocker

Published by Thriftbooks.com User , 17 years ago
A great book. I have to say I rank it pretty high among all the Laymon books I've read. I am dissappointed to know it's a part of a trilogy and now I must find the other two books to read! This is more gore than most of his books but it didn't stop me from loving it. This is Laymon and the ending is a jaw dropping thrill!

Don't go into the cellar

Published by Thriftbooks.com User , 18 years ago
Richard Laymon has the knack of turning what should be abhorrent into an entertaining literary feast and this is the case with The Cellar. The journey takes us through bestiality, paedophilia, torture and some of the most finely crafted suspense horror in a long, long time.The Cellar is located in the only attraction in Malcasa Point, the infamous Beast House with its blood steeped history and the even stranger Kutch House with no windows and only one door. Running from her deranged husband who has recently been released from gaol Donna Hayes finds herself stranded in Malcasa Point after a car accident in the fog. At her daughter's insistence she takes the Beast House Tour and meets Jud Rucker who changes her life around, albeit temporarily.What happens from here on in is bloodsoaked but so gripping you don't want to put the book down. Does the beast exist or is it one of the Kutch family playing dress-up? Will they all escape alive? Will they escape the clutches of the Beast House at all?If you like your horror novels with gore dripping from the page onto your lap as you read this is definitely the book for you.

your left in shock and horror

Published by Thriftbooks.com User , 20 years ago
This was my first Ricard Laymon book. After hearing of the plot from a friend I immediately rushed out a bought a copy of this horrorific book. A recommendation, if you get attached to characters easily and CAN'T STAND to see them hurt...dont read this. One of Richard Laymon's (RIP) great strengths is his ability to create great characters and make you pull for them. This is a fast paced read, with a story centering around the Beast House and its past infamy. Murders, rapes, gores and horrors are the norm at this house, all handed out by the 'beast'. The characters all come into place very nicely with some gruesome sub-plots to boot. With every uncovered truth we the reader are horrified at what is happening, but are left not wanting to put the book down because you dont want to leave the character in such an evil situation. The ending in this book has to be the most gruesome, gory and uh,...most DISTURBING piece of literature I've ever read (and Ive read some crazy stuff). I was left thinking, this can be over! I was outraged. Then, when i found that this was only the first book in the series i raced out and bought the rest. Richard Laymon will be missed, he is the greatest and most under appreciated horror writer of our time. Give this book a chance, its a short read and worth the nightmares
Copyright © 2020 Thriftbooks.com Terms of Use | Privacy Policy | Do Not Sell My Personal Information | Accessibility Statement
ThriftBooks® and the ThriftBooks® logo are registered trademarks of Thrift Books Global, LLC