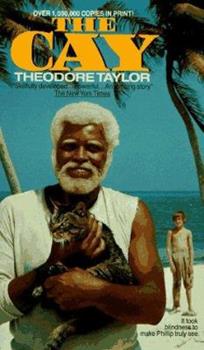 For fans of Hatchet and Island of the Blue Dolphins comes Theodore Taylor's classic bestseller and Lewis Carroll Shelf Award winner, The Cay. Phillip is excited when the Germans invade the small... This description may be from another edition of this product.

Published by Suds , 2 years ago
This is a good book. But the book i got is missing about 20 pages so do be careful.

Review of The Cay

Published by Thriftbooks.com User , 21 years ago
The Cay tells the story of a boy named Phillip and his unsuspecting friendship with a black man, Timothy. The war and the German submarines have come to Phillip's part of the Caribbean, and Phillip's mother fears for their safety. Phillip's dad must stay behind for his job, but Phillip and his mother board a ship that will take them back to Virginia where they originally lived. Two days after being on the ship, the ship is torpedoed and during the evacuation, Phillip is separated from his mother. Phillip awakens to find himself on a raft with Timothy and a cat named Stew Cat. The three castaways finally reach a small cay where they must learn to live off the land in order to survive while they hope to be rescued. There are many conflicts in this book that the main characters must overcome. This book is not only a great survival story, but a touching story about overcoming prejudices and seeing a person for whom they really are.

This novel should have won the Newbery Medal.

Published by Thriftbooks.com User , 22 years ago
CHARACTERS: Phillip Enright, 11, American citizen living with his parents on Curacao; Timothy, an elderly black West Indian deckhand; and Stew Cat, a tomcat shipwrecked along with them.SUMMARY: In February 1942 the Germans attack an oil refinery on Aruba, neighboring island of Curacao, Dutch island off the Venezuelan coast. Young Phillip is living in Willemstad, Curacao, with his parents, but after the attack his mother wants to return to America. Phillip and Father are against the plan, but eventually Mother gets her way.Just days out to sea, the Germans torpedo the Dutch freighter Phillip and his mother have boarded to flee Curacao. The ship breaks up and sinks; mother and son are separated. Mrs. Enright's fate is unknown, but Phillip is hauled onto a lifeboat by a very old black West Indian who'd been a crewmember on board the "Hato." The only other occupant of the lifeboat is an old cat named Stew Cat; the three are adrift on the open sea for days with only a keg of water, some matches and a few crackers.Phillip was struck on the head when the "Hato" was sunk, and he has a splitting headache and concussion. After two days on the raft with Timothy and Stew Cat, he goes completely blind. On the third day at sea a plane flies overhead and Timothy signals for help with a torch, but they are not seen.Timothy, Phillip and the cat make it to a small island that the old Negro, an old sea-hand, figures must be in the Devil's Mouth. Phillips initial reaction to Timothy is one of revulsion; he finds the big black man ugly and frightening. His mother's prejudice against blacks is a factor in his attitude, but Phillip eventually overcomes it and they truly become friends.When they first land on the island, Phillip feigns helplessness, refusing all labor. Timothy encourages the boy and teaches him to make things they'll need. When the boy gathers the courage to climb a coconut palm, he stops feeling sorry for himself and decides to do as much as he can. He is no longer a helpless blind boy. Timothy begins teaching Phillip survival skills--without telling the boy that he is preparing him for survival on the island after the old man dies.In July with a terrible hurricane brewing, Timothy makes preparations for it, including lashing their water tank, matches and knife high on the trunk of a palm tree. They survive the first part of the storm and rest while the hurricane's eye is over them. Then they again lash themselves to the tree again to wait out the storm. After the hurricane, Phillip finds that Timothy has borne the brunt of the storm to protect him; the big West Indian's back is flayed open by sand and things driven by the high winds, and Phillip can't stop Timothy's bleeding. The old man dies. Stew Cat, who was missing after the fierce storm, reappears.Initially the boy feels anger in response to the man's death, but gradually realizes how much Timothy did to prepare him for life alone. In addition to teaching

Published by Thriftbooks.com User , 22 years ago
This book was awesome! It started out with a boy named Phillip who lived in the Caribbean. Phillip and his family were racist toward black people. They kinfd of thought that thet were bums! During the book, 1942, some German tankers were attacking the ships that went out to sea. After a while Phillips mother did not feel safe where they lived. She wanted to go back to Virginia were they had lived before they moved south. Since Phillips dad had a steady job and was helping in the war he decided that it would be best if they stayed on the island. Phillips mother preferred to go back to the states. Phillip and his mother went back alone. On their way they got bombed. their was a great explosion and everyone was frightened. They made it to the life boats safely with the other passangers. But they did not stay in the boat for long. The boat capsized and phillip got knocked on the head. When he woke up he was on a boat with his worst enemy, a black man. He was a very, very ugly and he was very, very large. Phillip was very frightened. But mainly he was scared about knowing where his mother was. During this whole timeon this lifeboat with this black man named Timothy, Phillip had a terrible headache. One day he woke up and he was blind. The only plus was that his headache was gone. One day they landed on an island. They were stuck on it for a long time. While they were on the island there was a hurricane. It mad a log fall on both of them. It knocked both of them out. But Timothy did not wake up. Shortly a ship came and saved Phillip. The conflict in this book were man vs. man, man vs. nature, man vs. socirty, and man vs. himself. The man vs. man was the white people on the island and the black people on the island. The man vs. nature was on the island a hurrican struck and killed Timothy. The third conflict was man vs. society. it was the pressure on Phillips family to not like blacks. And the fourth conflict was man vs. himself. This was Phillip against himself. He had to deal with his blindness. In all I like this book. It was a very educational book because I learned what it was like during a hurricane. I also learned that the Island of Curaco was just north of Venezuela. I feel that anyone in the age group of fourth through eigth grade should read this book. It is not easy but it is defenitely not too hard. In conclusion this book defenitely deserves five stars. Like I said it was awsome.

Published by Thriftbooks.com User , 23 years ago
Although there are plenty of books about people who survive in the cold wilderness, I chose to include this island adventure in my fifth grade unit on survival. Not only did it get my students talking about survival skills, but it also allowed them to respond to the character's feelings on race in a neutral way. The students who read this book, both black and white, said that their discussions were very enlightening. I'd suggest this to teachers and parents as a good group novel or read-aloud.

Published by Thriftbooks.com User , 24 years ago
I am in sixth grade now and our english teacher picked the book The Cay by Theadore Taylore to read as an assigned book. The Cay was the most recent assigned book we have read so we are still doing essays. Just by looking at the cover, this book look stupid to me. But when I read it, it was excellent. My teacher is always making us write essays for assigned books. The topics for our Cay essays were as followed: Phillip's immaturity changing to mature; Phillip's prejudice towards blacks and then accepting blacks; a newspaper article on the German & Dutch war; a brochure for presuading people to visit a Caribbean island; a newspaper article on the rescue of Phillip; and a couple others I can't think of. I mostly got A+ and A's on all of these essays. The only thing that brought the 10 rating down to a 9 is because it was hard to read when Timothy talked. But other wise I would give it a ten. I think that this book would be good for boys and girls ages 11+. I am 12 now so I would qulafy. I hope you will read this book. It is awesome!!!
Trustpilot
Copyright © 2022 Thriftbooks.com Terms of Use | Privacy Policy | Do Not Sell My Personal Information | Cookie Preferences | Accessibility Statement
ThriftBooks® and the ThriftBooks® logo are registered trademarks of Thrift Books Global, LLC