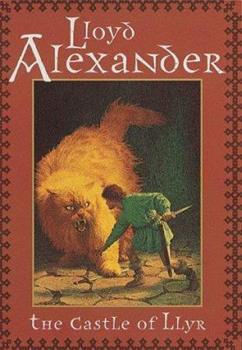 The Castle of Llyr (Pyrdain Chronicles)

(Book #3 in the The Chronicles of Prydain Series)

In the imaginary kingdom of Prydain, Princess Eilonwy must leave her friends to go to the Isle of Mona for training as a proper princess. Because Eilonwy has magical powers, she is sought by Achren, the most evil enchantress in the land. Shortly after her arrival on the Isle of Mona, something sinister and secret befalls her. Eilonwy's loyal friends--Taran, the Assistant Pig-Keeper; Flewddur, the bard; and Prince Rhun, her intended husband--realize...

Published by MissConviction , 1 month ago
quality paperback with inspiring story

Published by Thriftbooks.com User , 17 years ago
Taran has matured a little since the first two books; he's now less eager for a fight and also more aware of his feelings for the Princess Eilonwy. However, she's sent to the Island of Mona, the homeland of her ancestors off the coast of Prydain, to learn about becoming a proper young lady.Taran escorts her there with the loyal creature Gurgi and the foolish Prince Rhun as company. Once on the island Taran learns that Eilonwy's alleged aunt, Achren, has intentions for Eilonwy's magical powers that would be disastrous for all, and when one of Achren's sinister agents kidnaps the princess Taran leads a rescue mission to save her.Along the way they meet a harp-fancying cat in the forest and a midget named Glew in a cave, though both cat and midget have become giant-sized from Glew's magical meddlings, and the delays they cause make Eilonwy's plight all the more urgent.The themes of the book become ever more mature, as Taran sees in Rhun some of himself at a younger age--much to his irritation. And though I missed it as a child, the romantic tension between Achren and Gwydion is very much there (as it is in the first and last book, as well), adding greater nuance to a story in which Taran can't quite express his feelings for Eilonwy the way he'd like her to understand them. Not unlike most people in love, actually.The locations and plot may suggest that this story is a sideshow from the rest of the books, though the observant won't fail to notice certain characters and plot elements that lead directly up to the conclusion of the series.

Published by Thriftbooks.com User , 17 years ago
The continuing epic story of Taran the Assistant Pig-Keeper and his rag-tag motley crew of kings, princes, and furry ape-like creatures. This book in the Prydain Chronicles is, truth be told, far more usual than its predecessors. While the first two books in the series were fairly new and different adventure tales, this one falls back onto the standard rescue-the-princess-from-the-evil-enchantress mode. Eilonwy is in trouble, and we learn much more about her background and history than ever before. Added to the usual mix of characters for spice (the dwarf Doli fails to make an appearance in this tale and, I assume, leaves a gap) is another unwanted Prince. This time it's Prince Rhun, a good-hearted if completely incompetent young man. His betrothal to Taran's beloved Eilonwy does nothing to make our hero love him more, but the prince's sweet nature and good spirits eventually win everyone over. Also introduced by the cat loving Alexander (remember, this is the author of the interesting "Time Cat") is Llyan, an over-sized mountain cat that has taken quite a liking to bard Fflewddur Flan's harp playing. All in all, it's a pleasant mix of lovable characters. As you might be able to tell, this is not a good book to begin the series with. At this point, we know these people (and animals) fairly well and nothing they do will come as much surprise to anyone. It still amazes me to no end how prolific kings and princes are in this land. Though I understand that much of the point of these books is to show how little birthright counts when it comes to being good and strong. And it is quite a relief to see Taran doing something other than hot-headedly rushing into danger as he's done in the previous two books. Alexander's characters are growing, slowly but surely. It is with glee that I look forward towards reading yet another installment in this enjoyable series.

Published by Thriftbooks.com User , 19 years ago
A slight break from the thunderous intensity of Prydain's battles, Book 3 features our favorite characters from the previous two books. Again, maintaining continuity will greatly enhance your experience of each story. Eilonwy, the girl adventurer must return to her proper position of Princess, or at least learn to be more like one - no easy task for this independent spirit. She is sent to the Isle of Mona unknowingly to be prepared as the future Mrs. Prince Somebody. Taran, her best friend and best enemy, is sent to escort her to Mona. Unfortunately, there are plots afoot and Eilonwy is gone before they know it. Taran, working through his odd, new emotions for the Princess, is off and running with the faithful Gurgi and king-cum-bard Fflewddur. We also meet the silly, sweet Prince Rhun, a tuneful kitty, a subterranean giant, and a real witch.While this is about Eilonwy, her heritage, and her future, it's also about the future of the friendship as people must change and follow their own destinies. Taran poignantly learns that sometimes the very most you can do is nothing. The change of pace is a refreshing, as we see the characters develop with each other instead of having to constantly flee/fight evil. This adventure feels more like a quest, with challenges to overcome and a goal to reach. In the process, all the heroes become closer and richer together.

My favorite of the series!

Published by Thriftbooks.com User , 21 years ago
This book was my favorite of all the Prydain chronicles. Partly because a lot of the focus was on Eilonwy, though she was absent most of the book,(she has always been my favorite character) but also because it had great moral questions, and we finally begin to see Taran turn into an adult as he realizes as much as he cares about Eilonwy, he must let things be. In this book, Dallben decides that Eilonwy must leave Caer Dallben because it is time for her to learn how to be a young lady. He sends her to the Isle of Mona, and allows Taran to go with her, at least for the journey. On the way Taran struggles with his feelings for Eilonwy and his annoyance at Rhun, Prince of Mona, who is a bumbling fool, at least on the outside. Through an interesting chain of events, Eilonwy is kidnapped, and Taran learns that she is betrothed to Rhun without even her knowledge. They all go on yet another epic adventure to save her, as Taran must come to terms with his conflicting emotions. Another amazing thing about this book was that I didn't hate the love story part. Usually I hate mush because it seems as if they put it there just to be mush, and it rarely has any overall effect on the story. This however, was completly different, and I was actually hoping they would end up together. So, this is an excellent book that any fantasy lover would adore, though it would make more sense if you had read the other two books first.

Published by Thriftbooks.com User , 23 years ago
I have heard complaints that this book is boring, lacking in action. Obviously, some people fail to appreciate the DEEP EMOTIONAL TURMOIL Taran endures on his quest to rescue his beloved princess (the greatest heroine in ALL of fiction, thank you very much) so that she can marry a bumbling idiot in prince's clothing. Oh, wailings of misery! as Gurgi would say. This is the best book of the series, and my personal all-time favorite. A word to adults: don't cheat yourself out of Prydain because the series is "for kids". I'm 20, and can fully enjoy the dark drama of Tolkein as well as the next fantasy-lover. But don't pass up the mini-wheats just because they're frosted! These books are ageless; these characters are as real as your own best friends. In fact, the fifth and final novel is dedicated to "all the boys who might have been Taran, and the girls who will always be Eilonwy." Thank you, Mr. Alexander; I am one of the latter (this explains my lack of brevity!). READ THEM.
Copyright © 2022 Thriftbooks.com Terms of Use | Privacy Policy | Do Not Sell My Personal Information | Accessibility Statement
ThriftBooks® and the ThriftBooks® logo are registered trademarks of Thrift Books Global, LLC