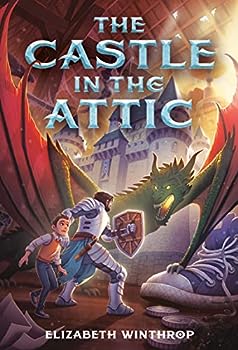 The Castle in the Attic

(Book #1 in the The Castle In The Attic Series)

One of the classic fantastical adventures of all time William has just received the best present of his life--an old, real-looking stone and wooden model of a castle, with a drawbridge, a moat, and a... This description may be from another edition of this product.

Too young for me

Published by Blaine , 3 years ago
Is for really young kids and I couldn’t get in to it.
Published by Thriftbooks.com User , 6 years ago
In fourth grade my teacher read this book to our class. It was a captivating tale. Now being 24 and a female, I was trying to think of the perfect Christmas gifts ( doing books this year for all of my nieces and nephews) for for my 8 year old nephew. This was the first book to pop in my head. This story is entertaining for males and females of any ages.

Published by Thriftbooks.com User , 21 years ago
What I would describe as early-fantasy, a book for kids who are getting into the genre. Snappy and well-paced, the book is also dotted with sweet moments that may bring a tear to the eye.William lives in a nice suburb with his ever-busy parents (I found it sweet how he still loves and treasures his parents, despite their frequent absence) and the nanny/maid, Mrs. Phillips. William receives shattering news: Mrs. Phillips intends to return to England. As a consolation gift, she gives him a toy castle with accompanying knight, and a tiny metal charm.Then the knight comes to life. The tiny silver man, Sir Simon, soon befriends William as the young man goes to desperate lengths to keep Mrs. Phillips. But a knight can't forget his duty, and soon William becomes entangled in the clutches of Alastor, the evil wizard. But how can a physically unimpressive ten-year-old defeat a powerful magician?William is an enjoyable character, made more so by his anxiety over Mrs. Phillips and general decency toward his fellow man. I also enjoyed the comparisons using his gymnastics lessons as examples of self-control and discipline.Mrs. Phillips was a lovely character, very compassionate and caring, but firm in her intentions. Alastor was pure evil, while Sir Simon was a thoroughly likeable and decent guy, without being too perfect or anything like that. I found Calender to be a rather sorry character, and was glad of the resolution written for her.The plot is pleasantly original, though I wish less time had been spent in "our" world. The writing style is rather ordinary, the first half a bit slow, and the descriptions somewhat underfleshed. However, the simple yet effective plot and good characterization overcome those problems. Without a doubt, kids should check out this book, and also the even-better sequel "The Battle for the Castle."

The best book you'll ever read

Published by Thriftbooks.com User , 22 years ago
I think this is great book, and if you get the time to read it, you just might find it's one of the best books you have ever read. In the beginning it is somewhat slow, but if you keep reading, the book will get a lot better and the plot will unravel. There is a little boy who gets a toy castle and a knight from his housekeeper who is moving away. After playing with the castle and the knight the kid starts to see that not everything is normal, and that his world is about to be turned upside down! I hope you read this book for I know you'll like it.

Published by Thriftbooks.com User , 23 years ago
We are in the third grade at an all boys school and we just finished reading The Castle in the Attic. We highly recommend this book because it has magic, wizardry, knights, castles, dragons and time travel. We also enjoyed this book because some of the story is fantasy and some is reality. Each character does one special thing in the story. For example, William's special ability to defeat the dragon. The adventure was very exciting! We think the author's use of adjectives is great. Boys and girls would love this book! If you want to read this book by yourself, we recommend it to any student in the third grade and above. However, anyone over 6 years old might enjoy listening to this tale. This book is magical!

RULES IN THE WORLD OF MAGIC

Published by Thriftbooks.com User , 24 years ago
Genre: MINIATURE Desperate to prevent his beloved English nanny from returning home, 10-year-old William devises a plan to shrink her unwillingly and keep her prisoner in the miniature medieval castle which she has entrusted to him as a farewell gift. Using a magic coin, he revives the Legend of the Silver Knight, who has been turned into lead by an evil wizard during England's Dark Ages.. Does this boy really possess the gentle but noble soul of a knight, one who accepts and is bound by the rites of Chivalry? His quest teaches him about honesty with his body and in other areas of his life. Will he prove worthy of courtly fellowship with Sir Simon? "There are rules in the world of magic, just as there are in our world." A fascinating and highly enjoyable read, no matter your age!
Trustpilot
Copyright © 2022 Thriftbooks.com Terms of Use | Privacy Policy | Do Not Sell or Share My Personal Information | Accessibility Statement
ThriftBooks® and the ThriftBooks® logo are registered trademarks of Thrift Books Global, LLC