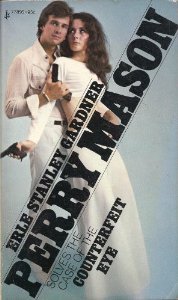 Case of the Counterfeit Eye

(Book #6 in the Perry Mason Series)

It's not hard to see that wealthy businessman Hartley Bassett has killed himself. There's the typewritten suicide note and three guns lying near his body. But for Perry Mason, that's evidence overkill! The legendary lawyer knows that there'd been trouble in Bassett's life: his wife wanted out, and his stepson hated him And there's the man with the glass eye who hired Mason even before the missing orb was found clutched in the deceased Bassett's hand.....

Published by Thriftbooks.com User , 16 years ago
The Case of the Counterfeit Eye Mr. Peter Brunold visits Perry Mason because of a problem with his glass eye: it was stolen! Brunold keeps spares for when his eye is bloodshot, and this was taken. He suspects it will be planted to implicate him in a crime. Perry figures out a scheme to prevent this. Next Bertha McLane and her brother Harry visit Perry Mason. Harry has embezzled money from Hartley Basset, who "makes all sorts of loans", and Harry wants to return the money if Perry can arrange it (Chapter II). Perry advises Harry to straighten out his life. In Chapter III Perry meets Hartley Basset and learns of his character. Perry also meets his wife, who is dissatisfied. A midnight telephone call summons Perry; Mrs. Sylvia Basset has trouble at home between Hartley and his son Dick. Hartley drove away after hitting Dick's secret wife Hazel Fenwick. Perry calls the police, then learns of a mysterious man with one eye. A search of the other rooms finds a dead Hartley Basset! When the police search they find two guns. How could that be suicide (Chapter IV)? Sergeant Holcomb questions Perry about his presence (Chapter IV). The police found a third gun carried by Basset. There is another complication: Dick's secret wife did not drive to Perry's office. Peter Brunold is called to Perry's office, and answers questions. Sergeant Holcomb shows up and arrests Brunold for the murder of Hartley Basset (Chapter VI). Perry learns the facts discovered by Paul Drake's investigation (Chapter VII). Bertha and Harry McLane show up; Harry's story about repaying the embezzled money has a problem (Chapter VIII). Perry and Paul use a ruse to talk to Sylvia Basset (Chapter IX). District Attorney Hamilton Burger visits Perry and ask him to produce Hazel Fenwick in 48 hours (Chapter X). In the next chapter we learn the shocking news about Hazel Fenwick! She was married three times before. Perry gets a call from Harry McLane who wants a secret meeting. When Perry goes to the hotel room he finds Harry will never talk to anyone. Peter Brunold's release is a new complication (Chapter XII). The Preliminary Examination begins with a new surprise (Chapter XIV). Then the Reno police catch Paul Drake handing papers to the stand-in hired by Perry Mason. It appears that Perry Mason stumbled, but we know what happened in Chapter XIII. When Thelma Bevins is questioned, Perry must tell all that he found out about the missing Hazel Fenwick. This produces pandemonium in the courtroom, and exonerates Perry from any witness concealment charge (Chapter XVI). Perry explains why he used a double for Hazel Fenwick, and what he hoped to accomplish. It worked as planned (Chapter XVII). In this story Perry Mason often acts as a detective, and certainly plays very close to the foul line. The appearance of a "serial murderer" in this story is a first (they don't use that term).

Mason vs Burger, the First Round

Published by Thriftbooks.com User , 20 years ago
This is the 6th Perry Mason mystery written in 1935. It might not be so good as a mystery, but it contains several impressive scenes such as Mason's grandstand play at the court, the sad romance of the client with the counterfeit eye, and the "infiltration operation" of Mason and Drake to the hotel guarded by the police.And it is also notable that Hamilton Burger, the District Attoney of Los Angeles County, Mason's arch-enemy, first appears on the scene. In this book, Burger is described as a respectable opponent who wants to be faithful to his duty. In later books, he gradually becomes an one-track minded, stubborn enemy who wants to get Mason by all means.

It is one of the most fantastic books I have ever read!!!

Published by Thriftbooks.com User , 24 years ago
Erle Stanley Gardner is a wonderful author. He has created a case that splendered me, and freiends. I've read the book 6 times in two months because I can't get enough of it. It is one of the best in the "Perry Mason" series if you ask me. I couldn't think of a better gift for any mystery fan. It has everything; Mystery, thrills, espionage, comedy and romance
Trustpilot
Copyright © 2022 Thriftbooks.com Terms of Use | Privacy Policy | Do Not Sell or Share My Personal Information | Accessibility Statement
ThriftBooks® and the ThriftBooks® logo are registered trademarks of Thrift Books Global, LLC