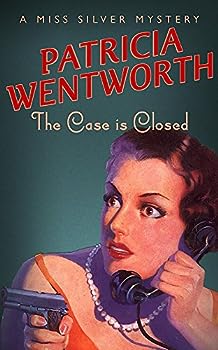 The Case Is Closed

(Book #2 in the Miss Silver Series)

This description may be from another edition of this product. In this classic British mystery, a revised will, a troubled upper-class marriage, and a crazed witness shake up a seemingly solved murder case. Marion Grey is growing used to the idea that her husband...

Published by Thriftbooks.com User , 21 years ago
This Miss Silver mystery focuses on the struggle for power in male-female relationships - on the light-hearted side, in the signature "nice young couple" (Hilary and Henry), while a villain displays dominance and abuse. We gain a picture of life among the well-bred if not well-fed as we follow Hilary's attempts to clear her cousin's husband Geoffrey, who has been convicted of the murder of his uncle. The attitudes and sensitivities of a different time are on display as Hilary's cousin copes with the degradation of having to earn a living as a couturier's model, and the loss of not only her husband, but the children she had hoped to have. Henry is not at all sure that the conviction was unjust, but the villains behave sufficiently suspiciously that he brings in governess-turned-private-enquiry-agent-Miss Silver, who discovers a decidedly dated motive for the down-trodden housekeeper's behavior. Some near escapes, tricky timetables and elaborate plots complete this tale from mystery's Golden Age. And with Miss Silver taking a hand, the happy ending and the triumph of justice are a comfortable certainty.
Copyright © 2020 Thriftbooks.com Terms of Use | Privacy Policy | Do Not Sell My Personal Information | Accessibility Statement
ThriftBooks® and the ThriftBooks® logo are registered trademarks of Thrift Books Global, LLC