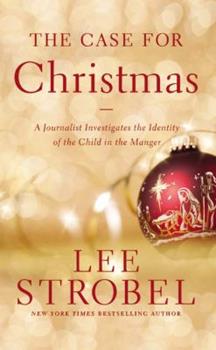 The Case for Christmas: A Journalist Investigates the Identity of the Child in the Manger

Who was in the manger that first Christmas morning? Some say he would become a great moral leader. Others, a social critic. Still others view Jesus as a profound philosopher, a rabbi, a feminist, a prophet, and more. Many are convinced he was the divine Son of God.Who was he really? And how can you know for sure?Consulting experts on the Bible, archaeology, and messianic prophecy, award-winning legal journalist Lee Strobel searches out the true identity...

The identity of the Christ child

Published by Thriftbooks.com User , 15 years ago
Reviewed by Richard R. Blake for Reader Views (10/07) Lee Strobel, award-winning author, journalist and investigative reporter, has written "The Case for Christmas." Stroble presents a logical case to help the reader determine for themselves if the babe in the manger, Jesus, was the person He claimed to be, Son of Man, Son of God, and very God Himself. From the first paragraph of the introduction to the last paragraph of the conclusion, Strobel's writing is compelling, intellectually challenging, thought-provoking, and convincing. Using eyewitness accounts, archaeological confirmation, and profile evidence Strobel helps the reader to arrive at a conclusion, their own personal verdict. Stroble's own journey to discover the reality of Christmas led him to seek counsel. He used his experience as an investigative reporter and the tools of his trade in his to find answers. Strobel presents the results of interviews with leading scholars in areas of biographical evidence, and scientific evidence. In presenting his case Stroble presented fingerprint evidence to answer the hard question, "Did Jesus, Jesus alone, match the identity of the promised Messiah." I personally found this chapter on fingerprint evidence insightful. The fulfilling of Old Testament prophecies regarding the Messiah gave authenticity to Gospel accounts of Jesus as the Messiah. Strobel also presented profile evidence to see if Jesus fulfilled the attributes of God. The incarnation, omniscience, omnipresence, omnipotence, eternality, and immutability all fit in the sketch and are found in the Christmas child. Reflecting on these attributes as a devotional reading offers a rich and rewarding experience. The book is designed especially for the Christmas and Advent Season. Strobel gives a strong presentation of the Christmas message for anyone seeking understanding of the tenets of the Christian faith, and for thought provoking reflection and mediation for the Christian. The format and design of this compact, attractive, book - "The Case for Christmas" -- make it an excellent gift for those family members, friends, agnostics, or atheists, who are seeking answers to finding answers in their pursuit for finding personal meaning to the reality of the Christian message of Christmas.

The Case for Christmas

Published by Thriftbooks.com User , 17 years ago
If you ever wanted to read a thorough invetigation into the facts surrounding the Christmas Story this is it. Lee Strobel interviewed the leading authorities on all of the Biblical claims and concludes the matter in convincing style.

Published by Thriftbooks.com User , 17 years ago
Lee Strobel has this approach down to a science, having honed his skills in "The Case for Christ" and "The Case for Faith." He identifies questions that he presumably has or had about Christianity from his previous perspective as an atheist and skeptic, finds extremely intelligent and impressively credentialed academics to interview, and writes down their answers to his questions. For a logical, sequential thinker, this approach most definitely works. "The Case for Christmas" is a shorter and less exhaustive work than "Christ" or "Faith," and it is ideal for distribution to spiritual seekers at a time of year when many are more open to consider spiritual things. Though I would consider his previous books to be more significant because of their greater length and depth (and would suggest them instead to anyone searching for some quality contemporary apologetics), I would certainly recommend this book to anyone who would like to hear some well-reasoned arguments that support the notion that the Christmas story, as told in the Bible, may have actually happened. If you're skeptical but willing to hear some facts and explanations which suggest that the story of Jesus in the Gospels may actually be true, then I'd encourage you to read this book.

Published by Thriftbooks.com User , 17 years ago
I go to church, on average, once a year on Christmas Eve because my mother sings in the choir. I'm an atheist, so are my brothers, but once a year is a tolerable sacrifice to support our mom. This year, at the Woodstown Presbyterian Church, I was handed a visitor's bag upon entry to the sanctuary. This book was inside in the bag, and I was happy to see it, since it gave me something to do during the ceremony. I'd heard about Strobel, though I'd yet to read anything by him. I expected to dislike the book far more than I did. The only line that I can really fault was something silly in the last chapter, like: "I thought of all the Jews who had been brought up to unnecessarily fear Christians and was sad." That evangelical corniness aside, it's a quick and interesting book. The tone is polite and thoughtful. It is a case for Christmas, or Christianity proper, but it is undoubtedly a lawyer's case. The author gives all the signs of somebody who knows what conclusion he wanted; though he professes skepticism, his behavior is otherwise louder. The question is how accurate the New Testament is, in particular the birth of Christ, and to this end the author interviews a half dozen biblical apologists, all with impressive credentials, who of course convince him that Jesus was indeed the son of God. The lawyer's case is made well, but it is undeniably lopsided. Strobel's client is obvious. Were this a trial experts would be interviewed on both sides of every issue, as opposed to the one-sided treatment here. Perhaps six carefully picked authorities are enough to overcome Strobel's skepticism, but they do not suffice for me. But I don't think the book professes to be anything more than a brief introduction to the Christian's argument, and it would be unfair to criticize it for being nothing more. In the last chapter, the author admirably invites the reader to study more on his own--surely a laudable call. The book would make a sufficient first step on one's road to salvation or atheism--and those interested in such journeys could do worse than start here.
Trustpilot
Copyright © 2022 Thriftbooks.com Terms of Use | Privacy Policy | Do Not Sell My Personal Information | Cookie Preferences | Accessibility Statement
ThriftBooks® and the ThriftBooks® logo are registered trademarks of Thrift Books Global, LLC