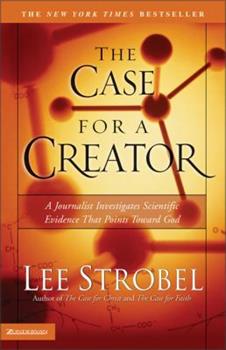 The Case for a Creator: A Journalist Investigates Scientific Evidence That Points Toward God

A Journalist Investigates Scientific Evidence That Points Toward God My road to atheism was paved by science . . . But, ironically, so was my later journey to God. ---Lee Strobel During his academic years, Lee Strobel became convinced that God was outmoded, a belief that colored his ensuing career as an award-winning journalist at the Chicago Tribune. Science had made the idea of a Creator irrelevant---or so Strobel thought. But today science is pointing...

Published by Thriftbooks.com User , 18 years ago
Lee Strobel has done an outstanding job of presenting views in support of intelligent design from biologists, physicists and astromomers who carry significant credibility in their fields. It's a fast read, yet deep enough to go back over and use as a springboard for deeper inquiry. For anyone who wishes to objectively weigh the claims for and against design, this book is an excellent reference. Does the book have a bias? Certainly. Just as much as many of the books by Sagan, Gould and Dawkins do as they draw on their atheistic philosophy. That does not prevent one from looking at the interviews, examining the points made by respected scholars, and weighing the evidence for competing viewpoints.

Not too over the top.

Published by Thriftbooks.com User , 18 years ago
This book was incredibly informative, yet written in a language that even the layman can understand. It has served not only to strengthen my faith, but also as a reference to refute claims by people with other views of the origin of life.

One of the best non-technical overviews available

Published by Thriftbooks.com User , 18 years ago
Why is it that the world of science has made such an about-face with the idea that the universe has an intelligent designer? At one time in the very recent past anyone supporting the idea of a Creator of the universe would have been ridiculed in the scientific community. These days they seem to be in the majority with more and more converts every year. In his book "The Case for a Creator" author Lee Strobel goes over the evidence that is causing such a shift in thinking. In a very easy to read interview writing style he discusses evolution, Darwinism, science and faith, the big bang theory of cosmology, physics, astronomy and probability, biochemistry, DNA, and consciousness. For each one of these subjects he delivers an interview with a top scientist who is a specialist in that particular field of knowledge. Here is your chance to listen in as Lee quizzes them on their reasoning and theories. Listen in as he asks the difficult questions and receives soundly reasoned answers. While these are recognized experts in their fields it should be noted that they were, of course, hand picked because they believe in a creator. As a result the book is basically an opportunity for them to espouse their views and give answers to common objections. Still, hand picked or not, the important thing is that they provide soundly reasoned, realistic answers to the questions and problems posed.If you received an education on evolution in school then you owe it to yourself to at least be fair and learn the other side of the coin. If you have come to doubt a creator for whatever reason and have been taught that science has no room for a creator then you owe it to yourself to see why top scientists are moving over to the creation camp. At least you will find that there are two sides to this debate and it is not a closed question coming down on the side of no creator. "The Case for a Creator" is a highly recommended read on one of the most enjoyable books on the subject that I have read.

Published by Thriftbooks.com User , 18 years ago
Lee Strobel has written another fantastic book for the beginners-level apologist. This book turned out to be an excellent sequel to his previous two works, "The Case for Christ" and "The Case for Faith." I found the experts that Strobel interviewed to provide excellent cases for "Intelligent Design" based on data from their respective fields of study. Strobel also does a good job of keeping the book entertaining by providing the right mix of technical data and easier-to-immediately comprehend material. This is a good feature so as to keep the reader interested. It must be kept in mind that Strobel discusses 8 or 9 topics, each of which has prompted the writing of a multitude of books covering that topic alone. The reader that wants a comprehensive defense of each individual topic must look elsewhere, and Strobel, as in his previous 2 books, provides a short list of pertinent books at the end of each interview. A solid summary-defense seems to be offered in each case as well as answers to a few objections, but in the limited space devoted to each topic, it is impossible to do complete justice to all of the evidence and to answer every possible objection. One example would be in the first interview with Jonathan Wells where various common evolutionary "icons" (e.g. Java man) are discussed. Wells it seems gives the reader good reason to be skeptical of the evidential value that each icon discussed may actually have for evolutionary theory. However, not all of the icons touted by evolutionists could be discussed, and Strobel rightly concedes as much in his book. One point of this chapter, however, was to evoke a healthy skepticism and desire to scrutinize the evidence that is being touted rather than accepting it as fact uncritically, and I think that Strobel is successful in demonstrating why this should be done by the reader.For a reader wanting to become familiarized with some of the evidence for "Intelligent Design," this book is fantastic. For one wanting to delve deeply into the evidence, this book would still provide a great stepping-stone into deeper-level material, such as the books that Strobel lists at the end of each interview.

Stunning reconciliation of science and faith

Published by Thriftbooks.com User , 18 years ago
Like a lot of people (including the author of this book!), I was turned off to faith in God because I thought Darwinism made theism obsolete. I found Phillip Johnson's book "Darwin on Trial" and Michael Denton's book "Evolution: A Theory in Crisis" helpful in refuting the fundamentals of evolutionary theory, but this book is even more powerful for several reasons.First, this book is not just a critique of Darwinism, although it does contain an excellent interview with Dr. Jonathan Wells, who pretty much decimates the idea that evolution can explain the diversity (or origin) of life. This book also builds a persuasive AFFIRMATIVE case for God from a scientific perspective. Drawing from interviews with scientists and philosophers of science, this book methodically builds the case for a creator from cosmology, physics, astronomy, biochemistry, biological information, and cognitive science, or human consciousness. By the time I finished, I felt like the verdict of "design" was pretty close to being airtight.Second, this book is actually entertaining to read! I've looked at several other books that delve into faith and science, including those that espouse the "intelligent design" perspective, and frankly they were pretty tough to slog through. In contrast, this book has energy, colorful writing, and an intriguing true-life storyline of a one-time atheistic reporter pursuing the facts. The opening chapter really grabbed me as the writer describes a newspaper assignment that confirmed his opinion (at the time) that science has dissolved theism in a vat of nitric acid. By the end of the book, he has shown quite the opposite to be true -- "science, when done right, points toward God."The interview with Dr. Stephen Meyer on the relationship between science and faith was worth the price of the book, in my opinion. If you believe, as I once did, that science and faith are in perpetual conflict, read this chapter! Meyer not only forcefully argues that science and faith actually are compatible, but he then does a phenomenal job of summarizing the evidence from science that points toward the existence of God. This chapter ought to be reproduced and distributed to every science student in the country!I highly recommend this book to anyone whose faith has been undermined by those who claim science has relegated God to the unemployment line. As this book documents, not only does science point toward a creator, but the clear-cut implications of the data are that this creator fits the description of the God of the Bible. That may seem controversial, but the facts speak for themselves. Read this book and decide for yourself.
Trustpilot
Copyright © 2022 Thriftbooks.com Terms of Use | Privacy Policy | Do Not Sell My Personal Information | Cookie Preferences | Accessibility Statement
ThriftBooks® and the ThriftBooks® logo are registered trademarks of Thrift Books Global, LLC