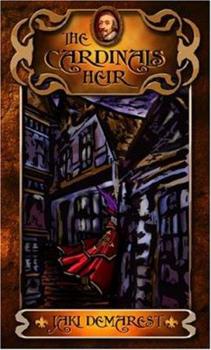 Cardinal Richelieu is dead, a victim of poison. The throne of France, which he has long protected, is once more unstable as rival factions vie for power. But the Cardinal has appointed two heirs: one to his religious position, and one to head the elite spy ring that has maintained France's fragile political balance. Francoise Marguerite de Palis, the Cardinal's lovely but low born niece, is devastated by her uncle's murder and vows revenge, which...

Published by Thriftbooks.com User , 15 years ago
Echoes of Dumas! Ms. Demarest has written a noble tribute to Dumas' adventures. I had great fun reading it. And it's one book, one beautiful, not a freakin' series, book. Pick this one up if you can if you like true heroines and heroes.

Published by Thriftbooks.com User , 16 years ago
Demarest has a deft and skillful hand with politics; the book is interwoven with subtle moves and countermoves, all made by a tremendously enjoyable heroine. Francoise is a delight, as is Andre, and the friendship between them is particularly compelling. The dialogue is swift and sharp, the characters are three-dimensional and the plot is fast-paced. I loved this book, absolutely loved it and would recommend it highly, especially to any woman over thirty. It's probably wasted on the young.

Published by Thriftbooks.com User , 17 years ago
I loved it! Smart, funny, impeccably researched, an absolute feast for fans of Dumas. You'll recognize Biscarrat and Kitty from The Three Musketeers, and Madeleine from Twenty Years After, all rendered with enjoyable revisionist twists. Fans of Joss Whedon will enjoy the writing style, especially the banter. Internal monologues are also hilarious. Not a sappy romance, thank g-d.

Published by Thriftbooks.com User , 17 years ago
Paris, 1642 Cardinal Richelieu is dead. Loved by a few but hated by many, the most powerful man in France was poisoned. Richelieu's baseborn but secretly beloved niece Francoise Marguerite de Palis, Comtesse de Pau, is one of the few who grieve over the elderly man's deathbed. She is determined to find the man or men who conspired to kill her uncle. A murder investigation is not the usual place to find a woman of the nobility, no matter that she is baseborn. But Francoise is different from most women. First, she's the head of the Cardinal's Eyes, an army of spies and assassins who provided Richelieu with all of his intelligence. Second, Francoise is arguably the most powerful Sorciere in all of France. With her uncle dead, Francoise would rather retire to Venice to live out her life in peace, but she promised to keep France safe and, of course, Richelieu's murder must be avenged. What's surprising is who assists her in her quest, handsome Captaine Jean de Treville, head of the King's Musketeers and the sworn enemy of the Cardinal's Eyes. Jean de Treville is flabbergasted when he learns at Richelieu's deathbed that his worst enemy, one he has fought and lost to on more than one occasion, is a woman, and a woman he lusts after at that. Embarking on an investigation with a woman proves difficult, his protective instincts warring with his knowledge of Francoise's skills. Soon, they're at odds about her involvement in certain aspects of the case. But through it all, Jean knows that he is falling in love with the beautiful spy. Together the two follow the leads which seem to implicate everyone from the King and Queen of France to Francoise's best friend and fellow spy, Andre. Francoise quickly realizes that she is pitting her skills against those of another Sorciere. As more members of the nobility succumb to the murderer, Francoise learns some devastating news; her husband may have been a part of the plot to kill Richelieu. Theirs is not a love match, but she never thought Antoine would go so far. Still, her uncle left her the means to annul the marriage, and she needs to think carefully about what she will do, especially with the feelings she has developed for Jean. But all is not what it seems, and neither is anyone involved in the case. Will Francoise and Jean find the murderer before he finds them? Can they resolve their feelings for each other in the midst of the confusion of the case? THE CARDINAL'S HEIR is a thoroughly modern fantasy set amidst the backdrop of Richelieu's France. Francoise is not your ordinary seventeenth century woman. She knows her mind, and her internal monologues are amazingly funny. Francoise has confidence in herself and her abilities, and fights like a man when it's necessary. As a spy for her uncle, she has been privy to all of the secrets of the French politicos. Saddened that she was unable to save her uncle, Francoise is pleasingly surprised by Jean de Treville's advent into her life. Jea

Published by Thriftbooks.com User , 17 years ago
His loyalty was to France and he protected her from her enemies but Cardinal Richelieu made many enemies in his use of power. Although a trusted advisor to King Louis XIII, the monarch chafed under the Cardinal's rule. At a soirée, Richelieu takes ill and his base born niece who he married to the Comte de Palais knows he was poisoned; even with all her magical powers, the Sorcerieress Francoise knows her uncle has only hours to live. He hands over the reigns of the Cardinal's Eye to his niece with the king's consent. When he dies an anguished Francoise promises to avenge her uncle's murder; as a spymaster and a powerful shapeshifting sorceress she has the power to do it. While searching through her uncle's papers she notices that a group of men, including her horrible husband and her best friend belong to a group in which the last survivor gains the valuable jewel the Heart of Flame. Needing to protect her friend, Francoise investigates the deaths and becomes, almost against her will, romantically involved with the Comte de Traville who helps her in her quest which involves a sorcerer almost as powerful as Francoise and just as dangerous. Fans of Judith Tarr are going to love THE CARDINAL'S HEIR, rich in historical detail and full of non-stop drama. The romance between Francoise and Jean starts off slowly so it feels believable and becomes something so beautiful that readers will root for the star crossed lovers who used to be enemies. Jaki Demarest is a talented storyteller who weaves magic into the storyline so that it doesn't overwhelm the readers. This is a fantastic work of romantic fantasy. Harriet Klausner
Copyright © 2022 Thriftbooks.com Terms of Use | Privacy Policy | Do Not Sell My Personal Information | Accessibility Statement
ThriftBooks® and the ThriftBooks® logo are registered trademarks of Thrift Books Global, LLC