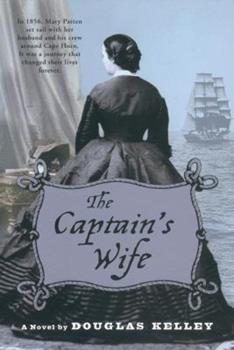 Based on the true story of Mary Patten, The Captain's Wifebegins in July 1856 during the heyday of the great clipper ships. Mary's husband, Captain Joshua Patten, is hired to navigate Neptune's Car on a treacherous voyage from New York to San Francisco through one of the most dangerous straits in the Western Hemisphere Cape Horn. Early on, trouble erupts on the ship. When the first mate is put in chains for plotting a mutiny and the captain falls...

A young Hemingway and the Sea!

Published by Thriftbooks.com User , 16 years ago
The Captain's Wife, by Douglas Kelly ISBN 0-525-94619-5 (HC) ISBN 0-452-28355.8 (pbc) Copyright by Douglas Kelley 2001 Published by the Penguin Group (Plume) First Plume Printing Sept 2002 BOOK REVIEW BY CAROLYN BRANCH LEONARD The Captain's Wife is a wonderful historical novel of the sea and the 1850s period. This rousing, delightful story is based on a little known true story of teenage Mary Ann Patten who, in 1856, had to assume the role of Captain of a clipper ship when her husband became seriously ill. The author lives in the small town of Pocola, in land-locked eastern Oklahoma and, like a young Hemingway, is obviously in love with the sea. Kelley's descriptive phrases were so powerful I had to get a blanket to stay warm while reading about the cold, wet journey. "The dim figure in the bow was wet, but so was Mary. So was almost everyone on board. Her dress, once new and pretty, was now fit only for rags, but she saw no benefit in putting on anything else. Like the crewmen working before her, she would only be wet again. And cold ...." She navigated the ship through treacherous waters and terrible storms in spite of a mutinous first mate, an illiterate second mate, and a ship full of rough sailors. While nursing her incoherent and almost comatose husband night and day, and assuming the necessary duties of captain, Mary learns she is pregnant and must keep this knowledge from the crew. I tried to limit myself to one chapter a day so the book would last longer. Could not do it. The Captain's Wife is so well written, the suspense so well defined and the adventure so exciting -- I could not lay the book down until turning the final page -- while still wishing for one more chapter. I recommended the book to my husband and he became spellbound for the next 48 hours as well. Mr. Kelley did a fantastic job of weaving known facts in with the necessary fictionalization; it is seamless. I especially liked the way the author started the book with the highest suspense, then went back and unfolded the full story. The epilogue and author's notes at the end gave us a little more detail. His extensive research is obvious.

Published by Thriftbooks.com User , 19 years ago
Nautical tales, I have read many; O'Brian, Forester, Pope, etc.They don't measure up to this one. I had to restrain myself from jumping ahead to learn the ending. I also especially enjoyed the explanations of the workings of the ship. I wish the author had other writings.

Published by Thriftbooks.com User , 20 years ago
I won't soon forget The Captain's Wife, or the amazing, larger-than-life, pregnant heroine, Mary Patten. I can only imagine the intensive research required to write such a memorable novel--yet none of it interferes with the drama, fear, and danger this determined young woman experiences as, threatened by mutiny, and against all odds, she finds herself steering an enormous clipper ship through the most treacherous seas known to man. I found it very difficult to put this book down. Every page was an adventure. I eagerly await this author's next endeavour.

A Woman's Book on a Man's Subject

Published by Thriftbooks.com User , 20 years ago
"The Captain's Wife" is a brillant story about a real woman that was 125 years ahead of her time. When you realize that Mary Patten was only nineteen years old, you will be amazed at this sea-going tale. She faced hardships that today's woman never dreamed of. She was the only female on the ship and the only person who could navigate after her husband fell ill. Kelly presents her as a rational and calm person who learns to work with the force of the sea. Kelley has done an excellent job in portraying what life at sea was really like, the hardships, the storms, the personal uncertainties. His characterization of the sea as a force in the story will be of interest to anyone who loves the sea, especially the history of seagoing vessels. Kelly's passion for accuracy in shipboard life and navigation lends a true sense of the reality of the story. I highly recommend this book for an extraordinary adventure.

Published by Thriftbooks.com User , 20 years ago
This book gives the reader a real feel for life aboard a clipper ship during the 1850's. It also shows the devotion the captain's young, newly pregnant wife, Mary Patten, holds for her husband, Joshua, after he falls ill and the ship is threatened by a mutinous crew. With the help of Timothy Hare, a young, illiterate sailor, she rallies the crew to complete their treacherous journey from New York to San Francisco round Cape Horn. Douglas Kelley obviously enjoyed the years of research he spent in order to tell this story of a wife's devotion. His language is lively and lovely, two qualities necessary for a love story at sea.
Trustpilot
Copyright © 2022 Thriftbooks.com Terms of Use | Privacy Policy | Do Not Sell or Share My Personal Information | Accessibility Statement
ThriftBooks® and the ThriftBooks® logo are registered trademarks of Thrift Books Global, LLC