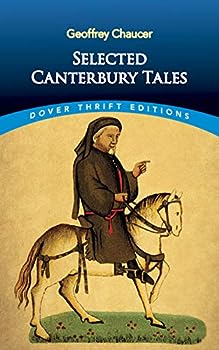 This description may be from another edition of this product. "A truly remarkable achievement." --Barry Unsworth In the tradition of Seamus Heaney's Beowulf and Marie Borroff's Sir Gawain and the Green Knight , Sheila Fisher's The Selected Canterbury Tales is a...

Published by Thriftbooks.com User , 17 years ago
Chaucer's Canterbury Tales, published by Barron's Educational Series, uses an interlinear translation format in which each line of Middle English is followed by a modern translation (in a literal form to make the comparison easier). I like this approach.Sometimes Middle English is recognizable. This line describing the knight - Ful worthy was he in his lord's werre - is readily understood if you recognize that werre is war.Contrastingly, this sentence about the prioress is less clear: And sikerly she was of greet disport. Or in modern usage: And indeed she was very diverting.I initially used a 1948, yellowed first edition with 448 pages, but more recently I found a copy of the "new enlarged edition" with 530 pages. This 1970 edition is no longer new, but copies can still be found with little trouble. It has been reprinted many times; my copy is the fourteenth printing.Both editions include The Prologue, The Knight's Tale, The Prioress's Prologue, The Prioress's Invocation, The Prioress's Tale, The Nun's Priest's Prologue, The Nun's Priest's Tale, The Nun's Priest's Epilogue, The Pardoner's Prologue, The Pardoner's Tale, The Wife of Bath's Prologue, The Wife of Bath's Tale, The Franklin's Prologue, and The Franklin's Tale. The new enlarged edition includes four more sections: The Miller's Prologue, The Miller's Tale, The Reeve's Prologue, and The Reeve's Tale.Both editions offer a short introduction and a short section of notes. The translator is Vincent F. Hopper.

Published by Thriftbooks.com User , 19 years ago
In addition to its literary importance, Chaucer's Canterbury Tales are an enchanting reading experience. The Bantam Classic edition presents the tales in Modern English translation alongside the Middle English so that one can fully appreciate the tales as Chaucer composed them, or if you're just in the mood for a fun romp you can speedily read the translation. The tales themselves move at a quick pace, so beginners will probably enjoy the modern version much more. The Canterbury Tales revolve around a group of 29 on a pilgrimage to Canterbury Cathedral to pay homage to the martyred St. Thomas a'Becket. The members of the pilgrimage come from all walks of life, including a Knight, Prioress, Merchant, Miller, the ever-entertaining Wife of Bath, and many others. The Canterbury Tales are the pilgrims' stories and each one reflects the individual character's personality beautifully. One can't help but feel a part of this lively group.Whether you like a bawdy, raucous tale or a morally sound fable you will definitely find something entertaining in this book. I laughed out loud several times and found Chaucer's use of symbolism, wit, wisdom, and the glimpse into 14th Century life absolutely fascinating.

Published by Thriftbooks.com User , 20 years ago
I remember slogging through The Canterbury Tales in Middle English when I was in high school and although the language is beautiful, having to take time to decipher it all did diminish somewhat the enjoyment of a terrific collection of stories. Since most of us are more comfortable with modern English, a good translation makes all the difference, and Nevill Coghill's excellent translation does full version to Chaucer's book. Reading this version takes the work out of it and makes "The Canterbury Tales" a pure pleasure. Chaucer writes about everyman and his stories represent one of the motliest crews in English literature: the Wife of Bath who has put away five husbands and is looking for a sixth; the pardoner, the reeve, the clerk, the knight, and a host of others from all walks of life. There is something in here for everyone; my three favorite stories are the Pardoner's Tale; the Miller's Tale (reading this in Coghill's translation, I could see why it has been excised from the bowdlerized versions used in high school English classes; it's rude, crude and downright lewd, but it's so hysterical they had to sew my sides up again when I finally stopped laughing), and the Franklin's tale of the knight, the squire and the magician who outdo each other in chivalry. Antisemitism was commonplace in medieval Europe and Chaucer is no more free of it than anyone else of his time; but to say that The Canterbury Tales is not worth reading because Chaucer was true to his time is overstatement. One must accept that Chaucer was as human and imperfect as most of his peers; without compromising the fact that Chaucer was a literary genius who had a profound effect on English language and English literature. Judy Lind

Canterbury Tales - Which Version is Best For You?

Published by Thriftbooks.com User , 21 years ago
Over some period I have read several translations of Chaucer's Canterbury Tales. My first experience, selections in a high school text, was not promising. (Perhaps, I was not yet ready for Chaucer.) Translating poetry from one language to another is difficult and often unsuccessful. Translating Chaucer from Middle English is not much easier. English has changed dramatically in the last 600 years, to the point that Middle English is nearly indecipherable. For example, we read Chaucer's description of the Knight's appearance: Of fustian he wered a gipoun (Of coarse cloth he wore a doublet) Al bismotered with his habergeoun (All rust-spotted by his coat-of-mail) A glossary, diligence, and time are required for reading the original Chaucer. If you choose to do so, the Riverside Chaucer edition (edited by L. Benson) and the Norton Critical Edition (edited by Olson and Kolve) are highly recommended. The Signet Classic paperback edited by D. R. Howard modernizes the spelling a bit, but largely adheres to the original Chaucer and is an easier introduction to Middle English. Although in most cases the instructor assigns a particular version of Canterbury Tales, it can be exceedingly helpful to pick-up an additional version or two. A slightly different translation may entirely surprise you, even resonate with you, making Chaucer much more enjoyable. I suggest that you look for these versions: Selected Canterbury Tales, Dover Thrift edition - provides a poetic, rather than literal interpretation, and is quite readable. The collection of tales is fairly small, however. Canterbury Tales, Penguin edition, translated by Nevill Coghill, is an excellent poetic translation. It is a complete collection, arranged by Group A thru H, and also includes The Parson's Prologue, The Parson's Tale in synopsis, and Chaucer's Retractions. Coghill's translation remains my favorite. The Canterbury Tales, Bantam Classic paperback edited by Hieatt, uses the "facing page" format with the original Chaucer on the left and a modern literal translation on the right page. I found the literal translation a little wooden, but this edition can be quite helpful if you need some help with Middle English. (A guide to phonetics, grammar, spellings, and a glossary is provided.) Chaucer's Canterbury Tales (Barrons Educational Series) uses an "Interlinear Translation" format in which each line of Middle English is followed by a modern translation (literal to make the comparison easier). I rather like this approach. Canterbury Tales, John Murray Publishers, London is hard to find, but provides a partial translation to modern English, maintaining as much as possible of the Middle English. This rather clever approach is somewhat risky, but the translator H. L. Hitchins pulls it off. With some effort I could follow the text without continually referring to a glossary and in a limited way I was "reading Middle English". Canterbury Tales, Pocket Books, prose translation by R. M.

The Canterbury Tales Mentions in Our Blog