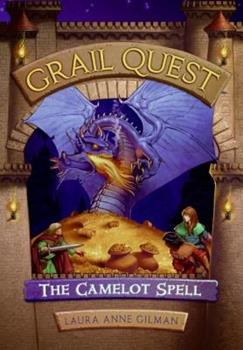 (Book #1 in the Grail Quest Series)

On the eve of the Quest for the Holy Grail, every adult in King Arthur's castle falls into an enchanted sleep. The future of Camelot rests on the shoulders of fourteen-year-old squire Gerard, who has dreamed of becoming a Knight of the Round Table his whole life. With the help of Newt, the stable boy, and Ailis, a young maidservant, he must face terrible dangers, including a monstrous bridge troll, a wise and scheming dragon -- and finally, a dark,...

An enchanting, keeps-you-on-the-edge-of-your-seat read that will be devoured in one sitting.

Published by Thriftbooks.com User , 15 years ago
Fourteen-year-old squire, Gerard, is utterly disappointed that he has not been chosen to accompany the knights on the Quest for the Holy Grail. After all, it is his wish to prove himself as a great hero who is brave, and ready for anything that life has to throw at him. However, he never realized that he would have the chance to prove his bravery this soon. For, on the eve of the Quest for the Holy Grail, at a large feast celebrating the momentous occasion, every adult in King Arthur's castle, in the midst of their filling meals, falls into a deep sleep - an enchanted sleep - and nothing will wake them. Now it is up to Gerard, who has spent every waking hour of his life dreaming of becoming one of the prestigious Knights of the Round Table; along with the help of Ailis, a maidservant who has been his friend through thick and thin over the years; and Newt, a rough and tumble stable boy, to make their way through various obstacles - including an ugly bridge troll, a dark and powerful witch who wants nothing than to take down King Arthur and the realm of Camelot, and a scheming dragon - in an attempt to save their home from the evil that will stop at nothing to have its way. And, in the meantime, make a name for themselves, and prove that, even though they are children, they have the strength to save the kingdom that has given them shelter all these years. Over the past couple of years, I have become very interested in Arthurian history, which is why I was ecstatic to learn that Laura Anne Gilman's GRAIL QUEST was being released. THE CAMELOT SPELL is an enchanting series debut that mixes the history of Arthurian legend, with fantastical elements to create the ultimate thrill ride through adventure and magic. The characters all bring about their own perspectives on the situation they have been throw into - from Ailis' quick-thinking, and wit; to Gerard's trained hand with the sword; and Newt's ofttimes cynical thoughts. THE CAMELOT SPELL offers a bit of something for everyone, male or female, history buff, or fantasy fan; and will leave everyone craving the sequel MORGAIN'S REVENGE. An enchanting, keeps-you-on-the-edge-of-your-seat read that will be devoured in one sitting. Erika Sorocco Book Review Columnist for The Community Bugle Newspaper

Published by Thriftbooks.com User , 16 years ago
King Arthur declares that he and 9*3 knights will seek the Holy Grail. In Camelot, a gala occurs to celebrate the upcoming quest. However, something strange occurs when all the adults abruptly fall asleep while all the children remain awake; adding to the discomfit of those not asleep is the fact Merlin is missing. Gerard squire to Sir Rhaymond d'Abmont realizes an enchantment has occurred, but that the children must pretend all is normal or their enemies will take advantage of the vulnerability. Gerard, Queen Guinevere's handmaiden Ailis, and Newt the horse boy know only Merlin can reverse the spell. They begin a trek to find the missing wizard unaware that a malevolent force will kill anyone who tries to prevent the destruction of Camelot. GRAIL QUEST is a fun young adult Arthurian fantasy that looks at Camelot from an entirely different perspective as children must save the day. Though his appearances are limited, Merlin steals the show as everyone knows not to mess with someone who can turn you into a rat; in some ways he seems like the Merlin in the Disney cartoon The Sword in the Stone. The three heroes are terrific with differing personalities as the squire and the horse boy squabble all the time while the handmaiden tries to keep the peace. Targeting the Potter crowd, Laura Anne Gilman enchants her audience with her version of the Knights of the Round Table. Harriet Klausner
Trustpilot
Copyright © 2022 Thriftbooks.com Terms of Use | Privacy Policy | Do Not Sell My Personal Information | Accessibility Statement
ThriftBooks® and the ThriftBooks® logo are registered trademarks of Thrift Books Global, LLC