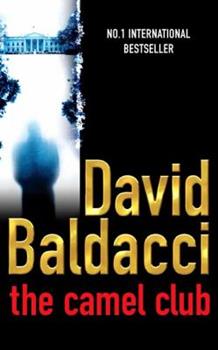 (Book #1 in the Camel Club Series)

This description may be from another edition of this product. After witnessing a shocking murder, four conspiracy theorists team up with a Secret Service agent to uncover the government corruption that threatens to cause an international terrorism crisis in this...

Baldacci is a superb writer.

Published by Diane Tippett , 2 years ago
I think it is more a man's book. It is far more detailed in explanations than I enjoy. Normally, I love all Baldacci books. My lack of interest and not finishing the book has nothing to do with the story or the writing. It is just me. I dropped it at about 60 pages. First book of his I did not finish.

Published by Thriftbooks.com User , 16 years ago
It is a truism that you cannot judge a book by its cover. However, if there is an exception to this, this is it! Author Baldacci has produced a book to match its great cover. He has combined a timely, well-paced plot peopled with interesting, believeable characters and a page-turning style that is probably unmatched by any other legal thriller writer. The plot is almost too real-time. It combines Arab terrorism with American conspirators with the U.S President as its target. Read it for pleasure and enjoy your time in a new (and exclusive) club---the Camel Club. A solid five star performance by Mr. B!

Published by Thriftbooks.com User , 16 years ago
David Baldacci is in my regular "mental floss" book rotation - whenever one of his books comes out it immediately ends up in the "read when you need a break from serious stuff" pile. His latest - The Camel Club - didn't disappoint me. It started off slower than most Baldacci books and it took me 100 pages to get completely sucked in. When I finished, I realized that he needed more time to set up all the characters in this one, as he had a large number of interconnected plots. My evening was sacrificed to the reading gods as I downed 300 pages of riveting storytelling. Spies, conspiracies, government corruption, secret societies, old CIA training facilities, presidential kidnapping, secret service heroics, many bad guys (some Americans), a bunch of scary dudes running the country including a few that thought nuclear war was a solution, computer hacks, meglomanics, near miss surveillance incidents, characters with major pasts coming back to haunt them, OCD, a little romance, and excellent gunplay made for a good evening.

Published by Thriftbooks.com User , 16 years ago
It's late. I should be in bed by now, but I couldn't wait to get a review started for this book. It's my first Baldacci, but it won't be my last. I was hooked on page one. The Camel Club is a political thriller that opens in Washington, D.C. (well, not quite. The opening chapter is not in D.C.), where we meet four eccentric, once-upon-a-time effective fellows who make up a group they call The Camel Club. Each has some kind of experience and/or brilliance that makes him essential to the small assembly; and each has been successful at one time or another in his life. Now, they are only reflections of what they once were. There's Oliver Stone (his assumed name), Caleb Shaw, Reuben Rhodes, and Milton Farb, conspiracy theorists all. They meet once a month in the middle of the night to discuss recent conspiracy theories and reflect/update those they've held for years. There are other interesting characters introduced in the early pages, including Secret Service agent Alex Ford who's on the downside of his career, and Kate Adams, a Department of Justice lawyer who works as a bartender at night. Go figure that one out! We are also briefly introduced to U.S. President, James H. Brennan, and to National Intelligence Center Director, Carter Gray, among others. Stone has a tent near the White House where he watches what goes on there. His goal is to find out the "truth" of things. He believes the American people have been denied that most desirous of tenets. On the evening of the beginning of this story, the Camel Club meets as arranged, but in the course of their meeting they unwittingly see a terrible crime committed on Theodore Roosevelt Island. Now, they must decide what to do about it...and I'm only on page 70! More later. October 29, 2005: It's later. Life sometimes gets in the way of finishing a good book, but it's been worth three nights up too late to do it in this case. The Camel Club members find themselves in the middle of a mess, having witnessed the murder of a Secret Service agent. Another Secret Service agent, Alex Ford, angers his superiors by deciding to investigate the death further than they had planned for this intended puppet. Stone and Ford end up working together to find out what's going on as a myriad of characters come and go, some with nefarious plans up their sleeves (there may even be a traitor in the club). It seems there are traitors everywhere and it's one of those times when one doesn't know who to trust. If you are into political intrigue, conspiracy theories, espionage, terrorism and/or assassination plots and all-around political paranoia, you will love this book. It is also very clearly and very well written. I can only say I hope there are many more Stones and Fords around than Captain Jacks and, well, others. Give yourself plenty of time to read The Camel Club. There are several subplots and lots of interesting facts about many things included in the story. The primary plot is very intense and you won't want to fin
Copyright © 2020 Thriftbooks.com Terms of Use | Privacy Policy | Do Not Sell My Personal Information | Accessibility Statement
ThriftBooks® and the ThriftBooks® logo are registered trademarks of Thrift Books Global, LLC