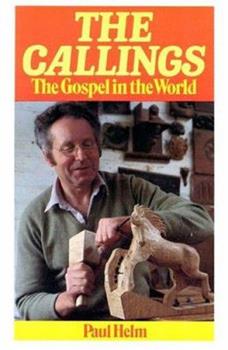 The Callings: The Gospel in the World

This description may be from another edition of this product. The Christian life begins when we hear and respond to the call of Jesus Christ. Like the first disciples, we must 'leave everything' in order to follow him. Paul Helm shows that instead of dividing...

Blows the doors off of your preconceived notions

Published by Thriftbooks.com User , 16 years ago
An excellent little book. Helm challenges you to understand "the calling" as something far deeper and broader than the typical evangelical assumption of "the calling to full time ministry". This book is a great service to the body of Christ.

Helm clarifies the concept of Calling

Published by Thriftbooks.com User , 22 years ago
.Paul Helm has written a demanding little book, one which, is "bigger on the inside than on the outside."Helm gives the most lucid, tightly-integrated and compelling treatment to the complicated matter of one's calling that I've seen. I find it difficult to imagine anyone doing a better job."The Callings" deals skillfully with matters which have languished in confusion lately, particularly the misguided (though old) notion that there is such a thing as "full-time Christian calling" as opposed to the calling placed upon everyone else. He also deals with the idea of multiple callings, not as fancies which we choose and reject, but as being placed upon all men and women (Christian or not) by God, and as crucual matters which we must discover and understand.Helm is a philosopher, which perhaps explains why no words are wasted in his arguments. Those used to the fluff which is found in many popular writings directed to the Christian community will find him difficult, but immensely satisfying. He forces necessary thought about critial issues.This book has the potential to change the way one looks at one's life, from mowing the yard and doing dishes to works of benevolence. Helm helps one to see that our lives are really seamless wholes, no matter how used to seeing them otherwise we may be.This book, in my opinion, is a must read. Get two copies. You'll want to loan one out. His two other popular books, "The Beginnings" and "The Last Things" are equally well-written and worthwhile.
Copyright © 2020 Thriftbooks.com Terms of Use | Privacy Policy | Do Not Sell My Personal Information | Accessibility Statement
ThriftBooks® and the ThriftBooks® logo are registered trademarks of Thrift Books Global, LLC