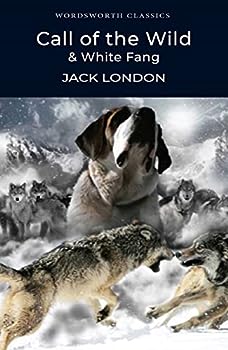 Call of the Wild and White Fang (Wordsworth Classics)

"Jack London's two most beloved tales of survival in Alaska were inspired by his experiences in the Yukon during the Klondike Gold Rush. Both novels grippingly dramatize the harshness of the natural... This description may be from another edition of this product.

Published by Thriftbooks.com User , 19 years ago
Jack London is amazing. Most writers use adjectives to describe a setting, but London's words ARE Alaska. They ARE the bitter struggles a domesticated dog must face in the snowy land. There's a scene in Call of the Wild in which the team of dogs must cover 3000 miles over the virgin terrain without rest. Jack London conveys the bone-tiredness of these dogs down to their heart. It's wonderful how his words bring the characters (I almost don't want to call them characters) fully to life.The story sounds like just a dog tale at first--a dog, Buck, is kidnapped from his comfortable life in California and sold as a sled dog for the Alaskan gold rush. While he endures the wilderness and the other dogs, Buck learns that survival comes only with tooth and fang. This lesson brings him very close to his forbears, the wolves.If you look deeper, Call of the Wild is as much a story of humans as it is a dog tale. Buck encounters various incompetent masters who try to break his spirit. Are we like this? But Buck also learns to trust a master who is gentle and gives love. We can be like this, too. Call of the Wild is not a story for the squeamish or very young. By involving us in the characters' lives, Jack London tells the truth. It is a life-and-death war between the harsh land and the soul every day. There is blood, death, cruelty--but it's the truth.

Published by Thriftbooks.com User , 22 years ago
-Call of the Wild- This classic tale of a dog's life is one to be remembered forever. The main character Buck, a dog, must learn to live as a sled dog to survive. -White Fang- This book, also about a sled dog, is a classic story written by Jack London.

When the way of the wild was a fact of life

Published by Thriftbooks.com User , 22 years ago
Written almost of century ago by Jack London, both of these stories have truly stood the test of time. Both of them are based on London's experience in the Yukon, and both are written from the point of view of dogs.In "The Call of the Wild", the dog Buck is kidnapped from an easy life and sold to a sled team during the Klondike Gold Rush. In spite of the numerous cruelties inflicted on him, Buck learns to survive. Eventually, he returns to the wild and to run with the wolves.In "White Fang", the story is reversed. White Fang is three-quarters wolf and was born in the wild. Through a series of events, he is domesticated and eventually becomes a tame and loving pet.There is much to learn in both of these stories. One thing is the way of animals and their life in the wild. Another is of the way of life in the Yukon. And of the men, both brutal and kind, who rely on the dogs to pull the sleds.Jack London used his words well. There's an elegant cadence and a vigorous spirit. His love for the animals comes through as well as his respect for the wild forces of nature. And the theme that life changes are really possible because of environmental forces.London didn't set out to write a story about the glorification of nature or vanishing wildlife. Indeed, during his short lifetime (1876-1916) the way of the wild was a fact of life. London just simply wrote his stories. And through his words, left a legacy of work that will continue to enrich the lives of readers for many generations to come.
Trustpilot
Copyright © 2022 Thriftbooks.com Terms of Use | Privacy Policy | Do Not Sell My Personal Information | Cookie Preferences | Accessibility Statement
ThriftBooks® and the ThriftBooks® logo are registered trademarks of Thrift Books Global, LLC