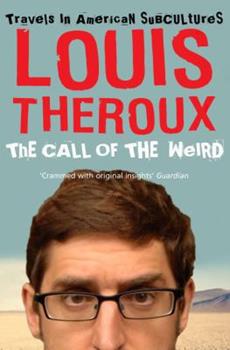 The Call of the Weird

No, it doesn't get much weirder than this: Thor Templar, Lord Commander of the Earth Protectorate, who claims to have killed ten aliens. Or April, the Neo-Nazi bringing up her twin daughters Lamb and... This description may be from another edition of this product.

Amazing how he does it!

Published by Thriftbooks.com User , 14 years ago
He seems to write just like he makes documentaries. With that silly, selfconscious undertone and his ability to love people who are obviously not lovable. The book reads like a train.

Published by Thriftbooks.com User , 15 years ago
Vonnegut type craziness plus television's version of reality gives this book a chance to define what is really weird from UFO cults to gurus to drug-crazed musicians

Published by Thriftbooks.com User , 15 years ago
THE CALL OF THE WEIRD: TRAVELS IN AMERICAN SUBCULTURES comes from traveler Paul Theroux's son, who proves himself a wizard of the wacky documentary. He's worked on programs about the fringes of society for the BBC and others, but THE CALL OF THE WEIRD goes beyond previous productions, covering the strange folk of society, from an Air Force dropout trying to make a career out of porn to a hip-hop group and one Thor Templer who claims to have killed ten aliens. Theroux's visits to these legends probes their beliefs, reasoning, and passions in a fascinating read public libraries will find a popular lend. Diane C. Donovan California Bookwatch

Essential reading for any fans of Louis

Published by Thriftbooks.com User , 16 years ago
Fans of Louis Theroux's award winning television series `Weird Weekends' should certainly seek out this read. Louis returns to some of the more interesting characters from the programme to see if/how their lives have changed since the filming of the series. His subsequent experiences make for compelling reading. However, anyone expecting a humourous read in the style of the TV shows should be warned, I found reading about these people and the way their lives had changed, a far more solemn experience than I had expected. Many of the people featured have fallen upon hard times, and the book presents a stark contrast from the television programmes where, by and large, events are far more positive. I was left feeling quite sad, lamenting the manner in which many of the featured individuals' lives have turned sour. Nevertheless, the aforementioned discussion of the direction and details of the book are in no way an indictment of its contents . Far from it; I couldn't put it down! It's more that the enjoyment derived is of a different variety from that found in the television companion to the tome.
Trustpilot
Copyright © 2022 Thriftbooks.com Terms of Use | Privacy Policy | Do Not Sell My Personal Information | Accessibility Statement
ThriftBooks® and the ThriftBooks® logo are registered trademarks of Thrift Books Global, LLC