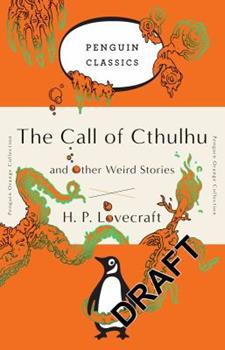 The Call of Cthulhu and Other Weird Stories: (Penguin Orange Collection)

Published by Thriftbooks.com User , 18 years ago
Its interesting reading those who critise HP for being a bit dull. In my most humble opinion, HP LOvecraft is a true horror writer. Horror is not, adopting HP's view of the world, a Freddy Kruger slashing to bits teenagers, or a world over run with zombies- the REAL horror is a wholly uncaring universe, with human efforts and endevours meaning absolutly nothing. The Cthulu mythos , as it is called, all flows from that basic concept- the universe, and the "great old ones" that populate parts of it, do not care for human endevour and that is enough to drive one mad. This philosophy is well reflected in the chilling opening lines of the "The call of cthulhu"- " "the most merciful thing in the world, I think, is the inability of the human mind to correlate all its contents".With that in mind this is an excellent introduction to HP. It contains a mix of his more serious and well known works " The Call of Cthuthlu" and " The rats in the walls", to some of the more obscure and self parodying works. This is not the full stretch by any imagination, but serves as an excellent intorsuction to a writer whose influence cannot be understated. There are some very short stories, plus the a selection of the longer ones in the canon.Joshis intorduction, and footnotes while from time to time are distracting are scolerly and informative. All in all this is THE best introduction to HP.Bear in mind that the Cthulhu mythos is not for all readers. If you are expecting more direct and blunt horror such as King, you will be disappointed. If you want thought provoking writing, that will get you thinking and linger with you after you turn off the lights you will not be disappointed at all.Grade: A++

The Contents of This Book

Published by Thriftbooks.com User , 20 years ago
Since there are so many different Lovecraft collections out there, it may be useful to prospective buyers to know what's actually in this one:[First, preliminary material by S. T. Joshi:] Introduction; Suggestions for Further Reading; A Note on the Text; [Hereupon stories by H. P. Lovecraft:] Dagon; The Statement of Randolph Carter; Facts Concerning the Late Arthur Jermyn and His Family; Celephais; Nyarlathotep; The Picture in the House; The Outsider; Herbert West--Reanimator [a collected magazine serial]; The Hound; The Rats in the Walls; The Festival; He; Cool Air; The Call of Cthulhu; The Colour Out of Space; The Whisperer in Darkness; The Shadow Over Innsmouth; The Haunter of the Dark; [By Joshi again:] Explanatory NotesUnlike in THE ANNOTATED H. P. LOVECRAFT and MORE ANNOTATED H. P. LOVECRAFT, also edited and annotated (though in the latter case co-edited and co-annotated) by Joshi, the equally copious annotations here are collected at the back of the book (thereby being what are technically known as "endnotes") rather than placed at the bottom of story pages where they're referenced (known as "footnotes"). And also unlike the "ANNOTATED" volumes, THE CALL OF CTHULHU AND OTHER WEIRD STORIES lacks photographs that highlight the relationships between the subjects in the stories and the persons and places of Lovecraft's life; features smaller print, which makes it a bit harder to read but means more stories can be packed into the volume. THE CALL OF CTHULHU AND OTHER WEIRD STORIES now has out a sequel, THE THING ON THE DOORSTEP AND OTHER WEIRD STORIES, a similarly arranged collection of Lovecraft fiction with an introduction and endnotes by Joshi and put out by the same publisher, Penguin. Each of these Penguin volumes, as well as the two "ANNOTATED" volumes published by Dell, presents its selection of stories in the order they were written, a practical advantage when reading Lovecraft.

Published by Thriftbooks.com User , 21 years ago
I don't think that there's a lot for me to add to what's been said already about the quality of Lovecraft's stories, except to agree with the assessment of Lovecraft as a stellar author of short horror fiction. The real question to ask about a collection of Lovecraft's work, though, is: what distinguishes it from all the other many Lovecraft collections out there? That is why I would give the Penguin collection 5 stars: the selection of stories is very good, arranged chronologically and covering the Lovecraft "hits," as well as some lesser-known earlier works. But what's most impressive about this anthology, as compared to others, is the superb annotation by S.T. Joshi, the premier Lovecraft scholar. There are ample footnotes to each of the stories, describing the backgrounds of the tales, discussing where Lovecraft got his ideas, pointing out thematic links, etc. These footnotes also provide insights into the life of Lovecraft himself, who apparently was not the weird recluse that one might initially suspect when reading his stories. In fact, Joshi includes many quotes from Lovecraft's correspondences, and some of these quotes are even very humorous (one quote deals with Lovecraft's description of his attempts to make a vocal recording in the style of Enrico Caruso, the famous singer). That's why this Penguin collection of stories is so good: you get many classic Lovecraft stories, along with Joshi's illuminating commentaries and annotation.

Published by Thriftbooks.com User , 21 years ago
Well, I never thought I'd see the day when Lovecraft would be issued in a Penguin Classic edition. Neglected for years, sneered at by snobs and pop-psychoanalyzed to pieces by phonies, it seems that Lovecraft is finally coming in to his own. For years, all we had were the Arkham House editions - we all owe a debt to August Derleth for never letting Lovecraft go out of print, but these weren't exactly on the shelves of your local book store. Lovecraft's influence reaches to this day - I can't imagine any of the "Alien" movies without Lovecrat's effect on H.R. Giger's conception. The "Blair Witch Project" could have been taken directly from a Lovecraft story (except for the language). Influenced himself by Poe, Lord Dunsany, Robert Chambers, and many others, Lovecraft managed to distill his own immediately identifiable style and capture the imaginations of generations of writers in the field. Long after Stephen King and Clive Barker have been relegated to the dustbin, readers AND writers will still find inspiration in the dark prose of the gentleman from Providence. This collection is easily the best single volume available of Lovecraft's work, and a steal at this price. If you aren't familiar with the 20th Century's greatest writer of horror fiction, I can not urge you strongly enough to sample this book - I am certain that you will NOT regret it.

Published by Thriftbooks.com User , 21 years ago
This book is an excellent introduction to H.P. Lovecraft. A sample of his classic tales in an affordable volume. Lovecraft is the finest writer of pulp horror and weird fiction. He can be a bit of a shock for readers whose only exposure to horror is Steven King. His tales are far more intellectual and psychological. This is aristocratic horror, who's protagonist is likely to be a professor of antiquities or a dilettante in search of anchient architecture. Forbiden tomes, such as the infamous Necronomicon, and ancient evil await these adventures. "The Rats in the Walls" has a man victimized by a family curse. His ancestral home goes deeper than he expected, with each sub-basement revealing an older period of architecture. What evil ground was this house built on? "The Shadow Over Innsmouth" is a story of a small sea town with a history, and a population with a strange look and strange ways. Horrible things live beneath the surface of the waters. Horrible things live above. "The Call of Cthulhu"....well, you will just have to see what lies around that corner for yourself.
Copyright © 2020 Thriftbooks.com Terms of Use | Privacy Policy | Do Not Sell My Personal Information | Accessibility Statement
ThriftBooks® and the ThriftBooks® logo are registered trademarks of Thrift Books Global, LLC