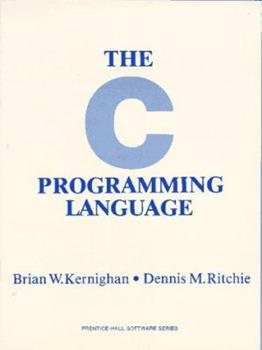 This edition describes C as defined by the ANSI standard. This book is meant to help the reader learn how to program in C. The book assumes some familiarity with basic programming concepts like... This description may be from another edition of this product.

Published by Dainius , 1 year ago
The book is very good. Anyone considering himself a C programmer should have read it and should have it within 15 meters at all times. It is a good book for beginner C programmers as well, despite being quite old. When buying here, double check the edition. I have expected to have bought the regular ANSI edition (white cover), but received an Eastern Economy Edition (green cover). No big deal, but I wish I'd had known that before the purchase. On the other hand, the price was much lower, so I should have suspected something like that.

The Book is in Chinese

Published by NT , 2 years ago
So yes the book is in good condition but the preface and the cover are in Chinese, I need the book for a computer architecture course. I wish I would have known that before buying the book. But I guess you get what you pay for?...

Published by Thriftbooks.com User , 20 years ago
About 5 years into my programming career, I was mildly interested in learning C, so I picked up this book. At the time, I was deterred - it was very brief, terse, and confusing, so I put it back down again.But now, years later, with many more languages under my belt, I find myself again drawn to C. So I picked up this book again (2nd edition), and finally, I see the light! It is a wonderful book, I agree with all the glowing comments people have written about it, BUT! It is a book written by a computer programmer, for other computer programmers, not a book written by a teacher for a beginning student.C is alive and well, and still in use today - it lives "at the core" of most popular languages. You can see its influence on C++, JavaScript, even Visual Basic. If you are ready for it, reading and working through the examples in this book will provide you with a solid base for understanding an amazing variety of 'newer' programming languages.You have to work through the examples, though. If you 'just read' this book, you'll comprehend and retain close to '\0' (null) of the information presented. It's only by going through the examples, that you really nail the subject matter. Yeah, I know, some of these examples are tough - but they're also real-life, and typical of routines every programmer writes and uses. I myself sweated blood over exercise 3-3, but hours later when I was done, the satisfaction of comparing my answer favorably to others was worth it. :-)I have the C For Dummies books 1 and 2, and after going through them, I was still a Visual Basic programmer. ;-D If you already are a computer programmer, and want to obtain serious knowledge in C without wasting your valuable time, learn from this book.

The best programming book I ever bought.

Published by Thriftbooks.com User , 22 years ago
I've first bought this book when I started my academic studies,and 5 years of work with Fortran 77 and three years of work withPascal.This small book (270 pages, including the index) served me well through my degree, and I still keep the dog-eared, yellowing, aged book with me at work.The book focuses on the language itself - this is no hands-on book (no explanations on how to use this compiler or that debugger, though it is a little biased toward Unix) in a clear, concise, and thorough way covering all of the language and it's standard libraries.I especially liked the excercises (the solutions come in a seperate volume) and the C source code examples of how some of the library routines are (or may be) implemented.With this book I had no problem understanding the more difficult subjects (e.g. many people have problems with pointers, and this book makes the subject easy to understand) and avoiding pitfalls.I've read it in a week, and keeping it in hand's reach smoothly started programming in C.The only drawback I see in this book is it's price, it's a small book which sells *very* well, and I'd expect it's price to be lower. This book is *not* for people who study C as their first programming language (those would be better served with a pair of books - a first course in programming and compiler guide).

A high-intensity tutorial and a great reference

Published by Thriftbooks.com User , 22 years ago
This book (widely known as K & R, after the authors' initials) has for over twenty years been the best way to learn C. When I got this book in 1980, I had access to a Unix system and worked through much of the tutorial material in it. On the way I learnt a great deal, not just about C, but about good programming style, code reuse, the value of clear comments--in short, I was introduced to the skill set of an experienced computer professional.The book was a trendsetter in several ways. For example, the very first exercise given is to print "hello, world"; this is now seen as the first exercise in innumerable other, more recent books, many of which may not realize that they are borrowing from K & R. The rest of chapter 1 (there's a chapter 0, an introduction; another geek-cool change which has been widely copied) is a tutorial that takes you through assignment statements, data types, if/else, for, while, printf, function definitions, arrays, and variable scoping, in less than 30 pages. If you work your way through the embedded exercises you'll have written utilities to strip tabs, reverse input by lines, strip trailing whitespace from input, and several others. This is much more challenging than most tutorials, but the effect on the student is that you feel you are being treated as an equal. The book doesn't talk down to you; it gives you accurate and concise answers. It's written for programmers, in other words.The next few chapters go back over the elements of C in more detail, and should also be treated as a tutorial. Going through this material religiously will be far more valuable than any college class could possibly be.There is a reference section at the back, which is good to have. But the real value of this book is in the tutorial approach: it is a rare pleasure in the computing field to find a book that is simultaneously clear, stimulating and informative.

The C Bible - no Question

Published by Thriftbooks.com User , 23 years ago
This is probably the greatest introductory programming world ever written!This is the classic "how to program" book. The book may seem quite old, but so is C, so you'll not miss anything. Half of the other introductory books written today will often quote this book, especially in reference to the "hello, world." example contained within. The "K & R" is well known among programmers as the all-time classic programming book - for any language.If you read through this book, I promise that you'll find it easy to grasp with a pace that will not bore you to tears.For those of you just starting off, remember that this is not a C++ book. You may not want to use Visual C++ 6.0 with this book. Instead, you can download a DOS based C compiler from wwwdeloriecom. I believe you'll find that compiler much more appropriate for learning C with this book, and best of all, it's FREE. After this book, you should have very little trouble adapting your knowledge to C++ and the Visual C++ 6.0 IDE.

The most elegant programming book I have ever read

Published by Thriftbooks.com User , 25 years ago
This book is not "for Dummies". It assumes that you already have some knowledge of structured programming languages (i.e. Pascal). For example, this book spends four well-written pages explaining everything you need to know about functions. If you don't know what a function is, this will clearly not be enough. However, if you do know about functions, this book will not drone on and on for an entire chapter or two on the subject like some of the foot-crunching tomes the size of an encyclopdia. The book is expensive ($40) for its size (approx. 250pgs.), but it is worth every penny. To quote the authors: "C is not a big language, and it is not served well by a big book." As a bonus, almost anything you need to know about C can be found in seconds using the excellent index. It should be noted that this is a language reference and will NOT tell you how to use your editing environment or compiler. In summary, intermediate or advanced programmers should be able to learn C with reasonable proficiency in a short amount of time.
Trustpilot
Copyright © 2022 Thriftbooks.com Terms of Use | Privacy Policy | Do Not Sell My Personal Information | Cookie Preferences | Accessibility Statement
ThriftBooks® and the ThriftBooks® logo are registered trademarks of Thrift Books Global, LLC