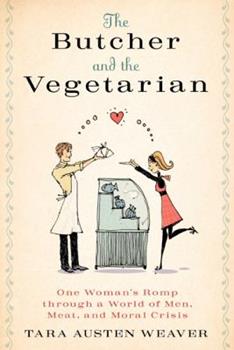 The Butcher and the Vegetarian: One Woman's Romp Through a World of Men, Meat, and Moral Crisis

Growing up in a family that kept jars of bean sprouts on its windowsill before such things were desirable or hip, Tara Austen Weaver never thought she'd stray from vegetarianism. But as an adult, she found herself in poor health, and, having tried cures of every kind, a doctor finally ordered her to eat meat. Warily, she ventured into the butcher shop, and as the man behind the counter wrapped up her first-ever chicken, she found herself charmed...

Published by Thriftbooks.com User , 12 years ago
This book is the meat-eating memoirs of a lifelong vegetarian who is told by doctors to mend her ways. Weaver was brought up in a vegetarian household that eschewed white flour and sugar. However, these dietary decisions were her mother's, not her own, and even as a child, she had a rebellious streak, wanting to explore the sugary, pastrami-filled world of her peers. She learned to cook in her mother's household, however, and thus, while an expert at quinoa and tofu preparation, had no clue what to do with a steak. When her doctor recommended that she include meat in her diet, she didn't know what to do, how to go about the task of procuring and preparing her new health food. In this book, she relates her meaty adventures, from the first purchase of beef bones for stock, through massive meat purchases for a doctor-ordered almost purely carnivorous diet. Along the way, she learns the terminology needed to get what she wants at the butcher shop and the value of consuming ethically raised meat, as well as the wisdom of her mother's ways. Weaver writes honestly, with great humor--I found myself laughing out loud as I read this book, even in the dentist's office. Overall, the book is a marvelous exploration into finding a diet that fits one's own body.

For Meat Eaters and Vegetarians Alike

Published by Thriftbooks.com User , 12 years ago
As a former vegan and vegetarian, I was eager to read this book because I too have had to navigate the process of eating meat, though, unlike the author, not so much in the cooking department. Weaver paints two vivid portraits, one of her childhood driven by her single mom who had strong ideals regarding vegetarianism, and the other as her adult self, seeking not just the meat the doctor ordered, but a community of meat eaters and lovers. She tries to find this at a butcher shop, and doesn't, and keeps searching, visiting farms and talking to the people who make the meat. In some ways, it's a slightly gentler version of Julie Powell's Cleaving, but with more moral conflict. Yet it's the conflict that is seemingly not fully fleshed out, as it were, here. Weaver wants to make sure we know she is aware of what eating meat truly entails but sometimes she drifts off into a "but it's so delicious" argument. Her health concerns are troubling, and when she finally lands on the diet that works for her, it's interesting to see where meat does and doesn't fit in. There's some insider foodie-ism here as she chats with the man behind Meathenge and talks to people who care about not just quality but humaneness. This is an interesting take, especially the mother/daughter issues and Weaver's excitement over an all-female butcher shop, exploring gender and family dynamics as well as health. In that it's a memoir, she doesn't come out firmly on one side or the other of the meat-eating line, but rather straddles both worlds and gives us an appreciation of them as worlds and cultures, not just things we do or don't put in our mouths. This is not, thankfully, a polemic but more of an exploration of the self (and the concept of self-denial) via meat.

Published by Thriftbooks.com User , 12 years ago
Tara Austen Weaver's chronicles her unique experience from being a vegetarian to eating meat in her book which is perfectly titled THE BUTCHER AND THE VEGETARIAN: ONE WOMAN'S ROMP THROUGH A WORLD OF MEN, MEAT, AND MORAL CRISIS. One cannot imagine the complex and indecisive process that she experiences as she makes her transition as well as conversion into the time consuming tentative selection of food that she has never eaten in her life for the sake of her health. For those who have gone through the change, indeed, it appears to be a tedious process that involves an itinerary of investigative inquiry of the who, what, where, and when of ingredients, e.g. where did that come from references and the almost politically correct choices that need to be made in order to buy a piece of meat that is also accompanied with guilt and denial. THE BUTCHER AND THE VEGETARIAN is by no means a critical memoir but rather a humorous account. Weaver's comical narrative lures the reader into her quirky dialogue where she describes her heady encounters, such as choosing the right beef burger, carrying a box filled with fresh pig flesh, and her acquaintance with the Food Network as her cooking tutorials a la Paula Deen and Martha Stewart. But as Weaver goes through the motions of including meat into her diet, there is not a day where she does not continue to mention what has been near and dear to her heart, her love for a less time consuming preparation of lentil soup or a salad over a steak dinner. After reading Weaver's account of her extremely contemplative personal narrative about her first-ever experience eating any meat products, a few eye opening and pondering thoughts may arise. But for the most part, Weaver shows the complexity of changing her food diet and the sense of humor that she is able to provide despite her on again off again and unrelenting struggle to embrace meat. And as a footnote, she summarizes her journey and the symbolic meaning of food that relates to categorization and community.

Published by Thriftbooks.com User , 12 years ago
I was pleasantly surprised by this book. I, perhaps unfairly, expected some lecturing and moralizing and general guilt-inducing from this book. Instead I got a well-written and very entertaining account of one woman's tale of testing the carnivorous waters. I think that vegetarians choosing to eat sustainable meat is a situation that is becoming more and more common and this book fills the void of discussion around this topic and it does it with flair and style. There are a few studies mentioned in the book that lean towards eliminating meat and I didn't feel that they were balanced by studies stating the contrary, but this book isn't so much a debate about what you should do but a story about what the author experienced. I would highly recommend this book.

Published by Thriftbooks.com User , 12 years ago
If you loved Michael Pollan's books, you won't want to miss this one! In many ways it is more intriguing, coming from the perspective of a woman who was raised as a vegetarian and indoctrinated in its ideologies. It is also an easier read, though equally fun and thought provoking. The author, Tara, has been ill for some time and her doctor prescribes meat. She had hypothyroidism--I would say because of all the soy she ate. (Soy is a goitrogen). The first chapters start out a bit slow: OK, so she has never fixed meat before and learns how to do it. Tara probably does not realize that for many of us raised as omnivores, our idea of fixing meat was to stick the Costco frozen chicken cutlet in the microwave--we never learned to make crown roast either. She ends up learning much more about meat than most omnivores, and certainly eating varieties we have never heard of. But then Tara takes us on an amazing journey through carnivore country, visiting eco-friendly ranches which are labors of love and the farmers are thankful if they break even; a butcher place owned by women; a slaughterhouse which is as sensitive and conscious as slaughterhouses can possibly be; a woman who raises her own meat in her back yard; steak houses and barbeque specialties, and much more. Throughout, we learn little tidbits such as which book is the meat bible/tome, and that if you own a share of a cow you can be sure it is more properly raised and more sensitively slaughtered. I always wondered why cows are not just shot--it's because they must be alive (though are stunned to unconsciousness) so the heart can pump out the blood. Tara also discusses the male attachment for meat, though women are also coming out about their love for it. The book is riddled with smiling humor and wit, and sometimes the laugh out loud kind, as when we find out that when Tara was 13, Martha Stewart was her guru. She grew up with a hippy mom, and "a generation of hippies had fled the constraints of their traditional upbringing to create an environment where there were no boundaries, only possibility. Having grown up in such possibility, all I wanted was structure....I didn't want to follow my bliss." Her teenage idea of rebellion was finally fulfilled while writing this book--she made Martha Stewart's crown roast! We also get to experience vicariously as Tara eats various forms of meat for the first time. She considers bacon "the gateway drug," wondering if she will be "mainlining lard" and said of barbecued bacon that it "made my head spin as if I were falling in love." But she also adored Syrian meatballs, flank steak and chimichurri. Her description of eating meat, though having been vegetarian, is surprisingly primal. She is also amazed at the big hoopla over serving meat at gatherings. "No one oohs and aahs over vegetarian food--certainly no one ever claps... I will tell you this: Nothing I've ever cooked has elicited as much excitement from my guests as a piece of meat has. Which is
Trustpilot
Copyright © 2022 Thriftbooks.com Terms of Use | Privacy Policy | Do Not Sell or Share My Personal Information | Accessibility Statement
ThriftBooks® and the ThriftBooks® logo are registered trademarks of Thrift Books Global, LLC